A Gaza artist has been threatened for drawing a cartoon that demonized Islamic Jihad. 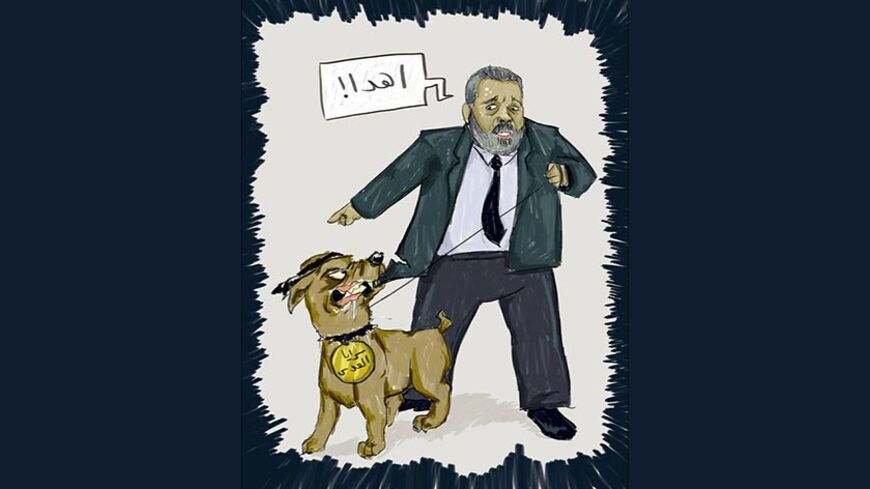 A caricature by Majda Shaheen of Gaza Prime Minister Ismail Haniyeh trying to tame an angry dog with the name “Al-Quds Brigades” written on its collar has sparked controversy in the Gaza Strip, Jan. 23, 2014 - Facebook/MajdaShaheenCaricatures

GAZA CITY, Gaza Strip — A controversy erupted Jan. 22 when artist Majida Shaheen drew and published a cartoon on her Facebook page depicting Gaza Prime Minister Ismail Haniyeh trying to tame an angry dog with the name “Al-Quds Brigades” — the military wing of Islamic Jihad — written on its collar. The cartoon is an allusion to the attempts of the Gaza government to prevent resistance factions from launching rockets against Israel.

The artist was threatened and cursed on her Facebook page. When Al-Monitor sent Shaheen a message requesting an interview, she refused, saying, “I am facing threats and pressure. I cannot do any interviews.”

The majority of threats the artist faced seemed to come from angry citizens, who considered the cartoon offensive to the resistance movements, especially Islamic Jihad.

“No one attacked her officially from the part of the movement. I followed up on the comments on Facebook, and these comments do not express our point of view. We consider her to be merely an unknown artist seeking fame,” Shehab noted.

He added that even though friends of the movement spoke in favor of filing a complaint against Shaheen with the Journalists Syndicate, they did not do so. “Every person has the right to express their convictions. Yet, we were upset with the indecent approach, which is not part of freedom of expression,” Shehab added.

The issue involving Shaheen calls to mind what happened with Al-Ayyam. The newspaper, published in Ramallah, was banned from being published and distributed in the Gaza Strip on Feb. 6, 2008. This was done because of a cartoon published on the last page of the edition issued Nov. 11, 2007, that the judiciary in Gaza considered offensive to the elected members of the legislative council.

Cartoonist Bahaa al-Bukhari and the newspaper’s editor-in-chief, Akram Haniyeh, were sentenced to time in prison, in addition to a fine amounting to more than $1,500. However, the sentence was not carried out because both Bukhari and Akram were in Ramallah.

Al-Monitor looked through the official correspondence regarding this case, including the decision of the governmental media bureau in Gaza. This decision was sent to the Ministry of Interior in 2009, demanding that the ministry allow the newspaper to be distributed again, yet the ministry did not respond. The ban of Al-Ayyam, Al-Hayat Al-Jadida and Al-Quds exemplify the political split between the Palestinian factions when as a countermeasure, Al-Resalah and Felasteen newspapers, both close to Hamas, were banned in the West Bank.

Caricature is considered one of the most important modern art forms and a medium to which Palestinian newspapers have channeled a lot of attention. The editor-in-chief of Al-Resalah, Wissam Afifa, said that his newspaper has been interested in this art for 17 years.

“Caricatures accompanied the newspaper ever since its first issue, and the first drawing was by artist Umaya Geha,” said Afifa, who stressed that the newspaper was only published a handful of times without any cartoons. He noted that during his term as editor-in-chief, he has not intervened in the issue of caricatures, despite criticism from readers.

He explained to Al-Monitor that the editorial policy of the newspaper was changed eight years ago. Before then, it had been the No. 1 opposition newspaper, and caricatures were used to galvanize the people. Today, cartoons express the daily concerns of Palestinian citizens.

“We are trying to give the talented youth a chance, as we are introducing caricatures into reports and investigations and not only publishing them on the last page,” he noted.

Shehda Dorgham, an artist and cartoonist who describes himself as socially conservative, recalls his experience with one of the publications close to Islamic Jihad. He told Al-Monitor, “They used to ask me to amend my drawings. It was hard to explain the fact that an artist is biased toward his drawings, and not to any political party. This is why I left the newspaper after five years and started to publish my caricatures on my Facebook page.”

Al-Monitor met with artist Ommaya Geha at the office of her cartoon company Gehatoon. She affirmed that with experience and professionalism, caricaturists develop a self-censoring process. They become acquainted with the red lines of society and newspapers. She said, “I draw for Al-Resalah and Al-Hayat Al-Jadida newspapers. I also drew for Al-Quds, and it was the only newspaper that had reservations about my drawings, because it was subject to Israeli military monitoring.”

Palestinian cartoonist Naji al-Ali, who was suspiciously killed in London in 1987, was and remains one of the most courageous artists of this genre. His drawings are still broadly shared on social media sites.

Talking about Ali, Dorgham said, “His drawings are characterized by artistic timelessness. They cross the boundaries of time. This means they will not go away.”

He added that Ali’s drawings were audacious in the use of black and white. Philosophers divided the world into evil and good, and so did Ali with his drawings. He did not have any place for gray. Dorgham added, “The drawings constituted an impressionist state reflecting the bad situation. He drew from within the fire and not from around it. At the end of the day, this is what caused his death.”

Afifa believes that nowadays, Ali is a role model for Arab cartoonists. He added, “Newspapers, however, have maintained the minimum of this legacy, and have yet to meet the standard [Ali] had set.”

Geha, who began publishing her work in 1996, was quick to hit stardom as an innovative artist and has received many international prizes. She reiterated the need of every artist for a muse, saying, “Sometimes I feel that my ideas are exhaustible. I miss my paint brush as I am preoccupied with graduate school, even though the history I am studying is an important element of art.”

Geha remembers the first days of the second intifada, when Palestinian cartoons had a huge impact on the world, noting that her website was hacked. Additionally, she received death threats as she was accused of being anti-Semitic.

Dorgham believes that the more audacious and straightforward cartoons are, the more they are remembered. Afifa agrees with this statement, saying, “This art is rough — it either stirs laughter or draws complaints. In general, it is hard for the social and political environment in Palestine to receive this art with openness.”

Such an environment has led Shaheen to post an apology on her page that reads: “I want to apologize for the caricature I published about the Al-Quds Brigades and Hamas. My intention was to communicate the idea to you in a clear and strict way. Many, however, prefer to deal with these issues on the face of it instead of digging deep to understand the idea that is supposed to be communicated.”