Despite the risks of being a female caricaturist in Idlib, many young Syrian women have successfully entered the field to express the concerns and pain of Syrians and make their voices heard. 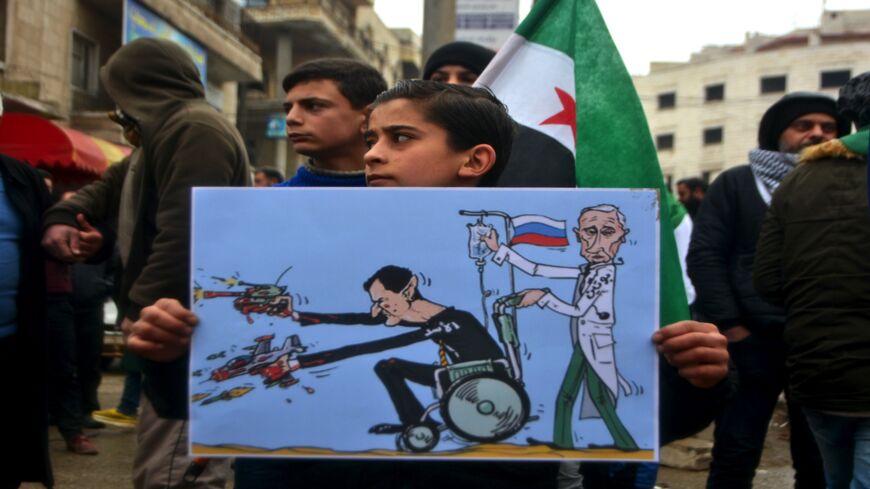 A young Syrian holds a caricature representing Syrian President Bashar al-Assad and Russian President Vladimir Putin as he takes part in a demonstration to protest against the continuing assault by the Syrian regime and Russian forces on the last rebel-held pockets in the northern Idlib province, in the city of Idlib on Feb. 21, 2020. - MOHAMMED AL-RIFAI/AFP via Getty Images

ALEPPO, Syria — Although the art of caricature has always been restricted to men considering it is an arduous path fraught with difficulties and dangers — especially in conservative societies that do not favor women working in this type of profession — a number of Syrian women in Idlib have bravely entered the field to convey to the world the image of daily life and express the concerns and hopes of the people in the last spot controlled by the Syrian opposition in northwestern Syria.

Nermin Shaar, a female caricaturist residing in Idlib, continues to publish her work in some local newspapers and on her personal Facebook page. Shaar aspires to excel and develop her skills and hopes to participate in art exhibitions and publish her drawings in major international newspapers.

She told Al-Monitor, “I started drawing at an early age, and I learned to draw murals and animation. Then I ventured into caricatures, which I loved. I developed my skill in this kind of art that is dear to my heart through lessons and training courses that I attended on YouTube and through my follow-up of the work of international and Arab artists in this field.”

Shaar added, “I loved the art of caricature because it touches on sensitive issues in society, tackles the world of politics, and expresses people's concerns, pain and daily suffering in a sarcastic way to draw attention. This art is dangerous and causes trouble, but it has a huge impact on reality.”

“I chose to face the possible risks from local authorities and social restrictions to gain a greater degree of influence. Through one drawing, a cartoonist can depict suffering or draw attention to a very important issue. [Her] drawing may be a spark of change,” she said.

She said, "I am still at the beginning of the artistic and journalistic path. There are many obstacles, mainly the absence of caricature experts. Therefore, I resort to educational courses on YouTube, and I want to have a high-capacity electronic device for drawing cartoons. The trouble is we also do not have an official body or a syndicate to preserve the rights of painters in Idlib.”

“I worked with several local newspapers and websites in Idlib, including Hibr Press. My goal is to shed light on a specific issue that bothers people in Idlib, to stand by them and to express their concerns so that I can convey what they feel but cannot say," she added.

“I am grateful to my family who supported me. Without them, I would not have continued training to hone my talent in a society that believes women should not enter the world of politics and professions that bring trouble, such as caricature,” said Shaar.

Hayaat Tahrir al-Sham (HTS) controls the Idlib governorate, which is home to nearly 3 million people in northwestern Syria and to Islamist factions and less-influential opposition factions. Shaar’s caricatures seem to defy social restrictions and local authorities to varying degrees to highlight living-related crises such as the bread crisis and road accidents. Shaar also focuses on criticizing the Syrian regime on an ongoing basis.

Painter Salam Hamid, who lives in Jisr al-Shughur in the countryside of Idlib, told Al-Monitor, “There is no work, profession, or talent without obstacles and risks. Through my experience in drawing and my passion for caricature and drawing on walls, I found that this talent is very welcome, which helps overcome many obstacles.”

She added, “My talent for drawing started in my childhood, and I discovered it in elementary school. It stayed with me every step of the way until I developed a strong bond with it. After stopping my university education, I devoted myself to my talent and started working on developing it with personal effort. I now draw using several techniques, including mural painting, oil painting and caricatures.”

“Art is a global language and has a huge impact and important role. Art has a great ability to convey strong messages and clear facts to the world and contribute to making voices heard and showing the suffering of people such as detainees, displaced persons and forcibly displaced persons due to war,” Hamid said.

She added, “My drawings reflect social and political issues, satirical events and every influential event that revolves around them. Through these drawings, I try to shed light on the suffering of children and civilians and embody the violations committed by the Assad regime and Russia. The world must hear about our suffering, and caricatures and drawings in general are an important tool for making our voices heard."

“For me, drawing is an outlet and gives me a feeling of happiness when I practice it. I do not think that it is a difficult talent, especially for women. It is a tool and a means to express any feeling, and it is a gateway to oneself. I aspire to be a model for successful Syrian women,” Hamid said.

Cartoonist Amani al-Ali, who lives in Idlib, told Al-Monitor, “Caricature is a dangerous art in itself because its ideas are often satirical and directed against society or people in power. It is often heavy for the target to hear, as it criticizes sensitive aspects. Women cartoonists who live in war zones face double the risk. For me, caricature is an important tool for achieving change and freedom.”

The road seems bumpy for cartoonists. In mid-July 2021, Syrian activist and painter Hadeel Ismail who works with the Syrian Press Center was stabbed and robbed by unknown persons in the city of Azaz in the northern countryside of Aleppo.

In a previous incident, on June 19, 2021, Hadeel was threatened by unknown masked men regarding her drawing caricatures of the former head of the Syrian Opposition Coalition Nasr al-Hariri. The Enab Baladi website quoted the director of the Syrian Press Center, Akram al-Ahmad, who said, “If you ever draw Nasr [al-]Hariri again, you will not like what you will see.”