This week Israel arrested Hamas member of parliament Samira Halaika in an attempt to pressure Hamas into a prisoner exchange deal. 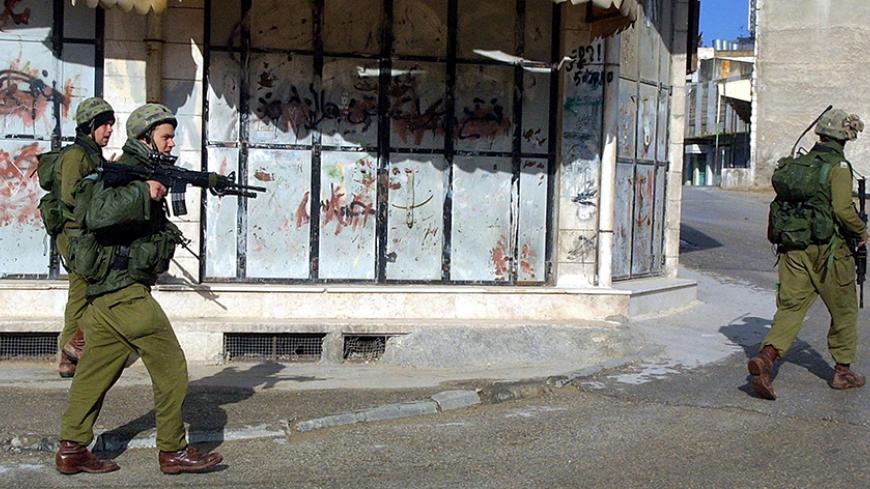 The Israel Defense Forces (IDF) arrested on March 9 Samira Halaika, a Hamas delegate to the Palestinian parliament from the West Bank town of Hebron. Reports of her detention emerged only after the Hamas Change and Reform Party issued an announcement saying Israeli soldiers had raided her home in the early morning hours near Hebron, searched the premises and took her with them when they left.

On March 6, IDF troops raided the homes of and then arrested two other Hamas parliament delegates, Khaled Tafesh and Anwar Zboun, residents of the town of Bethlehem. The three joined a fourth Hamas member of parliament from the Ramallah area, Hussein Abu Kuweik, who was arrested in August 2016.

The IDF didn’t release any statements explaining the arrests, but a Palestinian security source, who spoke on condition of anonymity, told Al-Monitor that the Palestinian Authority’s (PA) security services believe there’s no real reason for the move because the detained parliament members are not linked to the armed wing of Hamas. In his assessment, the arrests were a tool in the psychological warfare Israel is waging against Hamas to force it to return the bodies of two Israeli soldiers killed in the Gaza Strip in 2014 — Hadar Goldin and Oron Shaul — as well as Israeli civilians being held in Gaza.

The members of Hamas' Change and Reform Party were elected in the last PA elections, which took place more than a decade ago, in January 2006. But the parliament has been inactive since the 2007 takeover of the Gaza Strip by the Hamas military wing, and Hamas and Fatah have each set up alternative, temporary bodies.

Since then, despite many protests by the Palestinian public, no additional elections have been held. All the claims about the illegality of the regime headed by President Mahmoud Abbas and the disabling of the elected parliament have been useless.

In this anomalous situation, those representing the organizations elected to the now-defunct parliament continue to bear the title of “member of parliament” despite being elected more than 10 years ago and serving in the Palestinian legislature barely a year.

In the absence of new elections, Israel, too, continues to view these delegates as the senior members of the various political movements. And, as far as Hamas goes, its delegates also serve as pressure points on the organization. Israel assumes that Hamas leaders in the Gaza Strip — the senior echelons of the armed wing and of the political department — will be affected by the detention of their representatives. But such steps, which have been attempted more than once in the past, not only did not yield the hoped-for result for Israel, they had the complete opposite effect.

Hamas has never realigned its position following its people’s detention. A wave of arrests usually led to an entrenchment by Hamas and an escalation of violence between Hamas and Israel. In other words, not only are the senior Hamas figures not pressured by waves of Israeli arrests, they react through their military wing to moves they perceive as Israeli threats or provocations.

The latest arrests of the Hamas parliament members took place even as fury at Israel and the PA was simmering over the March 6 killing by the IDF of Basel al-Araj, a Palestinian resident of Bethlehem wanted by the Israelis. Angry protests were held in Bethlehem and in the northern West Bank town of Nablus by Palestinians against the backdrop of Araj’s killing, demanding that the PA stop its security coordination with the Israelis at once. Araj, a pharmacist known in intellectual circles for the articles and essays he wrote, was considered a harsh critic of Palestinian coordination with Israel. His killing, as well as the arrests of the parliament members, raises tension levels in the West Bank.

“You people never learn,” said a Fatah member from the Bethlehem area, where the two Hamas delegates, Tafesh and Zboun, were arrested. “The anger and fury on the ground, not just among Hamas supporters in Bethlehem and the West Bank, consumes everyone — even those in Fatah who regard Hamas as a hostile group,” he told Al-Monitor on condition of anonymity.

According to this source, the detention or killing by the IDF of a wanted Palestinian stirs up anger, but when the IDF detains elected parliament members who appear to have no connection to military activity, the anger is even greater. He said that such activity by Israel causes irreparable damage to Palestinian public opinion, which is no longer willing to put up with the PA’s security coordination with Israel. “Mahmoud Abbas cannot go on ignoring the protest against him for much longer, you’re killing him,” he said.

Beyond the public protests against the detentions, the arrests could also lead to an escalation of violence, which neither side really wants. The last Israeli attempt to pressure Hamas snowballed into the 2014 Operation Protective Edge in Gaza.

During the years preceding the operation, Israel arrested several West Bank-based Hamas parliament members. It was operating on a flawed assumption that did not prove itself, that such arrests would deter Hamas from attacking Israeli targets. In 2014, Israel also rearrested some 50 Palestinians freed in a 2011 prisoner exchange deal with Hamas. The Hamas military wing, Izz ad-Din al-Qassam Brigades, responded by firing rockets at Israel, and Israel retaliated by bombing targets in Gaza. The grim results of that military operation came in for harsh criticism of the government in a recent report by the Israeli state comptroller.

It would appear that Israel has truly failed to learn its lesson. The detention of Hamas representatives will not result in any deal with Hamas, and its leadership will not budge an inch from its entrenched positions, but it could lead both sides to an additional round of violence in which neither is interested.