A Fatah delegation is in Cairo to discuss reconciliation with Hamas, carrying a broad mandate from Palestinian President Mahmoud Abbas to compromise on control of security forces in Gaza. 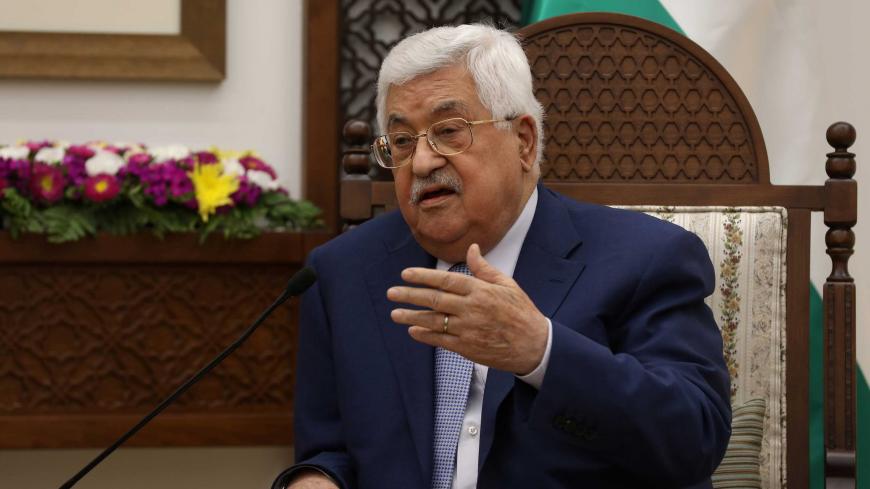 A Fatah delegation led by PLO Executive Committee member Azzam al-Ahmad, the movement's chief negotiator with Hamas, arrived in Cairo on July 29. Its mission is to discuss the statement of principles prepared by Egyptian intelligence on ending the split between the two rival movements. A senior Fatah source told Al-Monitor that the delegation will respond favorably to most of the proposals and that a deal is likely to be sealed within the coming weeks unless new obstacles emerge or Hamas reconsiders its acceptance.

The main point of contention that has thus far precluded agreement between the sides is control of the security forces in the Hamas-ruled Gaza Strip. Fatah chief and Palestinian President Mahmoud Abbas has in the past adamantly refused to countenance a Hezbollah-type Lebanese model that would allow Hamas to maintain an armed militia in Gaza while Abbas exerts control only over Gaza's civilian affairs. Abbas has refused to conduct a dialogue with Hamas for almost a year, since October 2017, for as long as it has refused to compromise on the matter of security control and to disarm its armed wing. The Palestinian source said Abbas has given the go-ahead for the Fatah delegation to agree to the Egyptian document in principle, without preconditions, and to now delay resolution of the security issue to a later date.

According to the senior Fatah source, who spoke on condition of anonymity, Abbas has agreed to have a committee headed by Majid Faraj, intelligence chief for the Palestinian Authority (PA), and Tewfiq Abu Naim of Hamas to discuss the implications of gradually transferring security control to “the sovereign source of the Palestinian Authority on the ground.” In other words, control of the security forces in Gaza would gradually be handed over to the PA, or commanded jointly, as trust between the two sides is rebuilt, patching up the bitter and violent split that erupted in 2006.

Hamas has already endorsed the plan. A source in Gaza confirmed that the movement’s leaders had responded two weeks ago in the affirmative to the road map drafted by Gen. Kamal Abbas, the new head of Egyptian intelligence, and are awaiting Fatah’s response.

After much deliberation and soul searching, Abbas has given his team sufficient room to maneuver that will, senior Fatah officials believe, allow for an immediate deal. “Most of the hurdles have been removed, and with the issue of security forces set aside, we can go ahead,” said the senior Fatah source.

The catalyst for the surprising decision by Abbas is his desire to step down in the coming months, the source added. Abbas seems intent on announcing his retirement once the “Palestinian people are reunited under one authority.” Interestingly, “one authority, one weapon,” the motto minted by Abbas himself, will be set aside until a later date, if ever.

Abbas appears to be operating according to his own, personal goal, unwilling to end his 18-year term without bringing an end to the Israeli occupation of the West Bank and the internal Palestinian split. Having despaired of reaching an agreement with the Israelis, his only feasible goal is to end the rift between the West Bank and Gaza, even at the cost of a very painful compromise.

The Egyptian proposal does not contain any magic bullets omitted from the previous draft proposals that failed to achieve the hoped-for reconciliation. Hamas is willing to immediately hand the PA full control over all economic matters in Gaza, such as tax collection and energy sources. This is nothing new. Hamas' leaders are more than happy to let the PA deal with these “headaches.” Let the PA find ways to supply Gaza’s 2 million residents with power, fuel and gas. Let it figure out how to collect taxes with half of Gaza’s residents unemployed and its traders and merchants barely managing to stay afloat.

After all, Hamas' leader in Gaza, Yahya Sinwar, announced publicly in December 2017 that his movement was ceding civilian control of the territory and would not take it back. “This is a strategic decision,” he said at the time, hoping to persuade Abbas to assume the reins. Abbas declined, until his personal interests aligned with the complex web of Palestinian interests.

Regarding control of the security forces, Hamas had agreed in the past that once it joins the Palestine Liberation Organization (PLO) and its various institutions and becomes part of the political Palestinian wing, its armed forces would be subject to PLO control. Such reasoning reflects part of an attempt by Hamas to outmaneuver Fatah. Hamas hopes to gain eventual control of the Palestinian umbrella organizations, or at least become the leading force within PLO institutions, which would allow it to regain control over the security apparatus. In any case, that issue has been shelved, for now.

This is the source of the optimism displayed by top Fatah officials, who are convinced that by the end of the summer, work will have been completed on forming a Fatah-Hamas unity government. The future government will comprise not only technocrats, as previous short-lived ones did, but also senior representatives of both sides. The two camps remain undecided about the identity of the future prime minister, however, and will have to compromise on a candidate.

Senior Fatah officials privy to the negotiations are already setting a timetable for Abbas’ retirement. According to the senior Fatah source, Abbas would like to see the appointed ministers move into their offices in Gaza in mid-September if the understandings are formalized and a unity government is sworn in. A month later, if the reconciliation is working, and the rift has been healed, Abbas will announce his resignation and prepare for PA elections.

The timetable sounds highly optimistic. The Egyptian mediators are taking advantage of both Hamas and Abbas being exhausted and desperate and of the organizational and personal interests driving them toward an inevitable reconciliation with which neither is wholeheartedly pleased.

What should worry all sides, however, is that rather than arriving at a true reconciliation, the resolution of core issues is being postponed. This is somewhat reminiscent of the 1993 Oslo Accord between Israel and the PLO that left key issues to be resolved at a later date, with ensuing tragic repercussions.