The Palestinian reconciliation deal appears to be moving ahead, with Hamas and Fatah agreeing to return the presidential guards to the Rafah border crossing with Egypt. 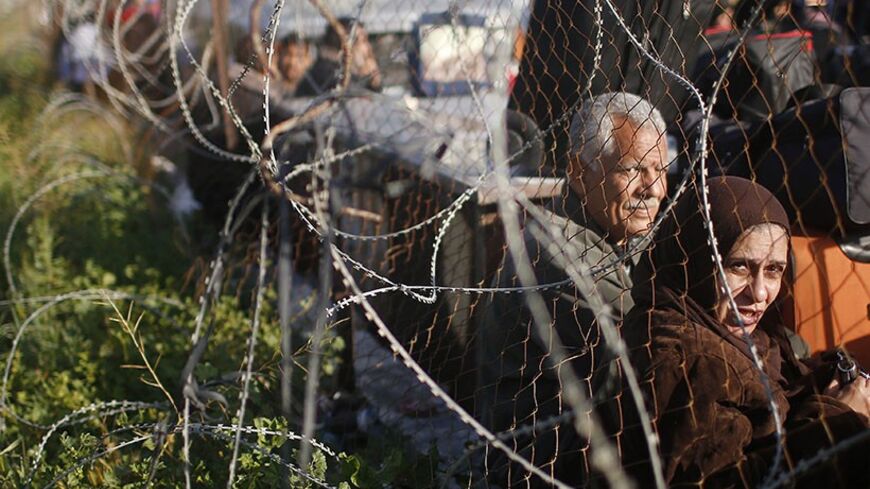 Palestinians hoping to cross into Egypt wait behind a barbed wire fence at the Rafah crossing between Egypt and the southern Gaza Strip, March 29, 2014. - REUTERS/Mohammed Salem

GAZA CITY, Gaza Strip — The reconciliation agreement between Hamas and Fatah appears to be moving ahead, despite clear challenges. The deal appears more serious concerning the implementation of reconciliation than previous agreements, especially following the receding political and on-the-ground horizons of the two Palestinian rivals in the West Bank and Gaza Strip.

Al-Monitor spoke with a Hamas source who participated in the meetings that took place between the delegations of Hamas and the Palestine Liberation Organization (PLO), in the house of vice chairman of Hamas’ political bureau, Ismail Haniyeh, in the Shati refugee camp, west of Gaza City. The source said that the two delegations were able to draft the major part of the new agreement in the first session, which lasted until 2 a.m. The rest of the points were completed the next day, when the agreement was announced.

Azzam al-Ahmad from Fatah and Mahmoud al-Zahar from Hamas participated in writing the terms of the agreement, with the help of Taher al-Nunu, Haniyeh's media adviser. Zahar demonstrated “unexpected flexibility,” as described by a well-informed source in the Fatah movement. Hamas leaders Khalil al-Hayya and Haniyeh interfered to resolve any point of contention in the process of drafting the statement.

The same Hamas source revealed that the agreement was not only the result of the meetings held in the Gaza Strip, but was preceded by multiple contacts between the two parties. The turning point was contact between the head of the delegation, Fatah leader Azzam al-Ahmad, and Hamas leader Mohammed Nasr, who is based in Qatar. This was followed by other contacts that led to the arrival of the delegation to the Gaza Strip, and then the signing of the agreement.

The same source, speaking on condition of anonymity, revealed that Hamas had called on Ahmad to ensure that Mousa Abu Marzouk, a leader in the movement residing in Cairo, be part of the Hamas delegation in the Gaza Strip, given that he is the head of the reconciliation dossier and the most informed about its details.

“We wanted to examine the position of Egypt, the sponsor of previous agreements, by [seeing their stance regarding] allowing Abu Marzouk to come to Gaza. [If they allowed him to come,] this would infer Egypt’s tacit acceptance of what may be reached. And this is what actually happened, as it gave the Hamas leaders the feeling that Egypt wants the Palestinian parties to reach an agreement and put an end to the state of division,” the source added.

Hamas’ motives for achieving reconciliation with its ​​political rival, Fatah, are no less important than those of Palestinian President Mahmoud Abbas and his Fatah movement. Abbas now sees the Gaza Strip divided between Hamas and Fatah leader Mohammed Dahlan, according to the Fatah source who spoke to Al-Monitor on condition of anonymity.

“Abu Mazen [Abbas] is now empty-handed after the failure of US efforts in the peace process with Israel, the continuation of the division and the growing strength of Dahlan both in Gaza and abroad. This made his position tend toward reconciliation more than ever before,” the source added.

Abbas has seemingly made a concession about Hamas’ participation in the PLO and its institutions. This had long been an obstacle to the implementation of all the previous agreements, which prompted Hamas to waive the participation of any of its members or close associates in the next — likely technocrat — government.

The Hamas source said, “The reconciliation agreement cannot succeed without the activation of the PLO and Hamas' participation in it. This is a clear and explicit condition to Hamas, and this is what was signed in previous agreements and emphasized in the latest agreement.”

According to the Hamas and Fatah sources, the two parties agreed that the proportion of the upcoming parliamentary elections should reflect the representation of each faction in the National Council of the PLO, especially in areas where the organization will not be able to hold elections, such as Jordan and Syria. There might be elections in Lebanon, and this will be agreed upon at a later stage through consultation with the countries hosting Palestinian refugees.

Ahmad tried to push the date of the parliamentary and presidential elections to a year after the formation of the government, contrary to what was determined in the Cairo Agreement. Fatah and Hamas reached a middle ground, provided that the elections will be held at least after the formation of a unity government, according to the “Gaza Declaration.” This technically means, according to the source, that the date of the elections will not be announced for another six months.

During the discussions in the Gaza Strip, the previous agreements between the two parties were reconfirmed. Hamas would keep controlling the security forces in Gaza without any change or amendment, and a deputy interior minister from Gaza would be appointed in the new government to take charge of these forces.

“The security forces and weapons will remain under Hamas control, and no radical changes will take place in its structure, at least during the first year. Only 3,000 police and civil defense members from among the previous government employees will return [to Gaza],” the Hamas source said.

“We know that Hamas has a pronounced security grip and influence in the Gaza Strip, and that protecting the border will remain among the responsibilities of security forces, which Hamas is in charge of. We do not want to take responsibility for the clashes with other Palestinian factions that might launch missiles on Israel,” the Fatah source noted.

According to the two sources, the two parties agreed on the return of the public prosecution staff and the judges who receive their paychecks from the Palestinian Authority (PA) to their work places. This would reduce the huge burdens weighing down the judiciary and the public prosecution that are currently fully managed by Hamas.

Moreover, the presidential security apparatus will return to its former role of protecting the Rafah border crossing with light weapons, following huge popular pressure on Hamas after the Egyptian side of the crossing was closed in the wake of Egyptian President Mohammed Morsi's ouster. The current police, which manages the Passport Department, will remain in place. There will be changes in the staff of different ministries, such as the Foreign Ministry, Health Ministry and others, based on the concept of a technocratic government.

The two sources from Fatah and Hamas confirmed that the employees of the ministries will no longer be a large burden after the return of the PA employees to work. Hamas appointed more than 20,000 civil employees after taking over Gaza. There will be a specialized committee to study the retirement of employees. Both parties had previously agreed on the terms of retirement and confirmed them in Gaza. They set the retirement age at 55, provided that the employees who want to retire as of the age of 50 be paid their dues in advance. This would reduce the number of employees.

Both parties hope that the Arab states will form a financial security network to pay the dues of Palestinian employees, in addition to the financial compensation to the families of the victims of both parties who died during the fighting between 2006 and 2007.

The Hamas source indicated that Hamas might contribute to paying up to 40% of the dues of retired employees, which would be a major cost for the movement. This would be equivalent to just over the amount of salaries for one month of its current employees in Gaza.

The experience of the Muslim Brotherhood-affiliated Ennahda movement led by Sheikh Rashid al-Ghannouchi in Tunisia pushed Hamas toward reconciliation with Fatah and encouraged it to make huge concessions to protect its gains under the regional changes, according to the Hamas source.

“Ghannouchi strongly pushed for the internal Palestinian reconciliation and considered it the optimal way to rise above the current crises,” the source noted.

The conflicting parties, Fatah and Hamas, succeeded in their latest agreement despite the concessions involved for both. However, the issue of the PLO and its actual activation will remain the toughest part in the battle to enforce the new agreement. The Palestinians are afraid that this agreement will be added to the list of old unimplemented agreements.