Switzerland gets active on Palestinian reconciliation

After the Swiss Paper in 2014, Switzerland gets active on the Palestinian reconciliation in an attempt to solve some of the outstanding issues between Fatah and Hamas, most notably the issue of Gaza’s employees. 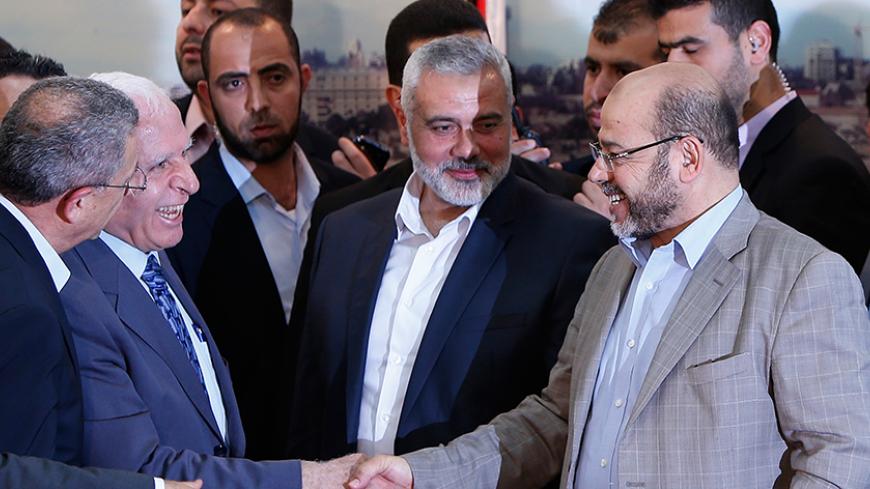 RAMALLAH, West Bank — Paul Garnier, the Swiss ambassador to Palestine, visited the Gaza Strip through the Beit Hanoun (Erez) crossing, which is controlled by Israel, twice in a short period. The first visit was on April 6, and the second on May 9. These visits attest to the Swiss’ intensified action regarding reconciliation between Hamas and Fatah, hoping to overcome the division that has plagued the Palestinian scene since 2007.

The issue of the Gaza Strip’s employees is considered one of the main disputes impeding reconciliation. It began when Hamas appointed about 40,000 employees to government ministries in Gaza after 2007 to replace previous employees, who are demanding to be employed on a full-time basis in the Palestinian Authority (PA). Switzerland is hoping to find solutions to this and other complex issues.

Within the scope of these efforts, Garnier met with Ismail Haniyeh, the deputy chairman of Hamas' political bureau, on May 10 and confirmed his country's intention to hold a conference on the Palestinian reconciliation.

Ahmed Youssef, a former political adviser to Haniyeh, told Al-Monitor, “Although the final date or form of this conference were not determined, Garnier told Haniyeh about his country’s intention to achieve reconciliation and find a solution for the issue of employees. He also offered to put forward Hamas’ point of view through a speech given by a chosen delegate or through a video conference, without an invitation being sent to Hamas to visit Switzerland and attend the conference.”

Youssef said, “Europeans and especially the Swiss are seeking to achieve Palestinian reconciliation because it is easier for them to deal with one Palestinian party on the political level, instead of two, in order to ensure a unified political representation when it comes to the peace process with Israel, within the scope of their efforts to achieve the two-state solution.”

It is not unusual for Switzerland to push for the reconciliation. It had already launched in October 2014 a complete plan to address the Gaza employees’ salaries crisis under international supervision and with the approval of the PA. This plan was known as the Swiss Paper, but it was not implemented. The expected conference will be focusing on this crisis.

Reconciliation is linked to several issues, namely the formation of a national unity government that would pave the way for presidential and legislative elections and a National Council six months after its formation, in addition to achieving community reconciliation and holding a PLO leadership meeting that could effect change.

Youssef said, “The conference in Switzerland aims to end the division and discuss the outstanding issues between Fatah and Hamas that the international community may help resolve, such as the Gaza’s employees crisis, by ensuring the provision of financial liquidity from Arab and international parties."

Nabil Shaath, a member of the Fatah Central Committee, told Al-Monitor, “The Swiss action focuses on the issue of the employees, which has been impeding the completion of the reconciliation agreement so far, especially since October 2014. Switzerland submitted a plan to solve this problem, but it never saw the light because Hamas required the inclusion of a large number of its employees.”

On the Swiss motives behind this move, Shaath said, “Switzerland is a neutral country that abides by international humanitarian law and has no political or economic ambitions in the region. It is acting to help us rebuild our political system and achieve unity. Switzerland also aims to strengthen its international standing, which is highly esteemed.”

It should be noted that Fatah and Hamas have been holding meetings in Doha, Qatar, to reach reconciliation. These meetings started in secret and away from the media in December and were disclosed Jan. 17. However, they are currently stalled due to bickering between the two movements and an exchange of accusations following the death of three children whose home was set ablaze in Gaza; each movement accuses the other of not being ready to sign the final reconciliation agreement.

These meetings aim to complement the April 2014 reconciliation agreement between Fatah and Hamas — known as the Shati Agreement (Beach Refugee Camp Agreement), signed in the Beach refugee camp — in order to head toward the formation of a national unity government and start preparations for holding presidential and legislative elections and the elections of the PLO National Council.

Azzam al-Ahmad, Fatah leader and official in charge of the reconciliation talks with Hamas, told Al-Monitor, “The meetings in Doha are currently suspended. We are still waiting for the third and final round, which is supposed to be crowned … with a meeting between President Mahmoud Abbas and the chairman of the political bureau of Hamas, Khaled Meshaal, but this session is not scheduled yet since Hamas is not ready.”

He added, "We have informed Qatar that we are ready to participate in the third session, but Hamas is not ready yet. The Doha talks are not a substitute for the Egyptian role and are limited to the agreement on only two points — the formation of the national unity government with full authority and subject to the PLO program and the agreement to hold elections after six months of the formation of the government.”

Youssef confirmed that the Swiss efforts do not conflict with the reconciliation efforts of Egypt and Doha, saying, “The Swiss met with the leadership of Hamas’ political bureau in Qatar and briefed the Qatari officials on their efforts to find solutions to the complex issues impeding reconciliation.”

He said that in 2014, Qatar and Switzerland through their diplomatic relations promoted ideas within the international community to provide aid and pay the salaries of the Gaza Strip employees.

Ahmad Jamil Azem, professor of international relations at Birzeit University, told Al-Monitor, “Switzerland’s involvement in the reconciliation is not new, and it might be aimed at organizing the Palestinian internal situation on the one hand, and to keep Hamas on its side on the other hand so that it does not hinder the effort aimed to reactivate the peace process, whether through the French initiative or that of Egyptian President Abdel Fattah al-Sisi.”

As of the end of the war on the Gaza Strip, Gaza has become vulnerable to external political projects. Azem explained, “The international efforts in the Gaza Strip, including those related to the Turkish-Israeli negotiations, [former British Prime Minister] Tony Blair’s plan opposed by the PA and the efforts of former US President Jimmy Carter, as well as the Swiss efforts, suggest that the international efforts fall within the scope of an attempt to prevent the explosion of Gaza and express the world’s unwillingness to see a new war in the Strip.”

He said, “The proposed international initiatives and efforts are rejected by Israel, which is trying to freeze the conflict and contain it rather than solving it, as it continues to suffocate the Gaza Strip. This situation is convenient for Israel since it leads to a rift in the Palestinian political representation and separates Gaza from the West Bank.”

Hamas and Fatah have yet to end their divide, now in its ninth year despite dozens of initiatives and hundreds of meetings, which indicates that the circumstances are not yet ripe for the Palestinian parties to achieve unity, especially if the reasons that have prevented the success of all previous agreements persist.