The release of Hamas official Muhammad Abu Tir and the ensuing calm could signal that Israel and Hamas are creeping toward an arrangement. 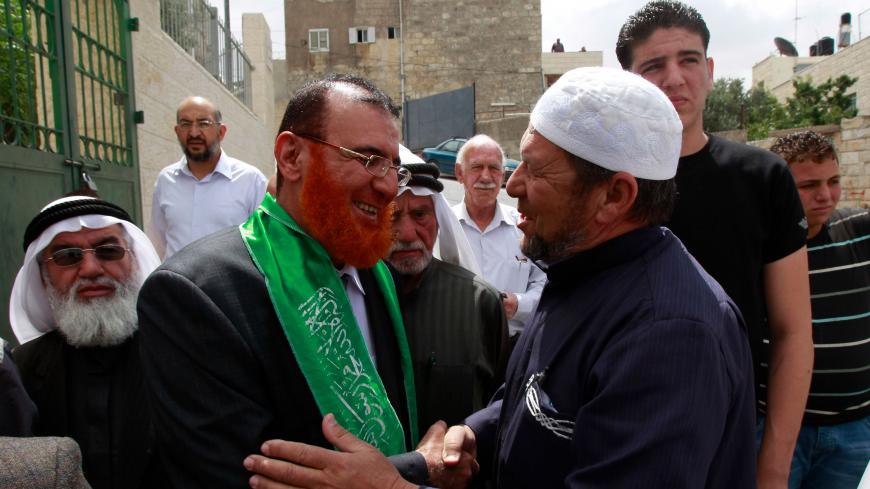 Hamas lawmaker Muhammad Abu Tir (2nd L) is greeted after his release from Israeli prison at his house in East Jerusalem, May 20, 2010. - REUTERS/Baz Ratner

On Oct. 10, Israel freed senior Hamas member Muhammad Abu Tir from administrative detention. Abu Tir, who serves as Hamas' representative in the Palestinian parliament, had been arrested by Israel on several occasions since 2006. The last time he was detained, this past March, the Israel Defense Forces arrested him on suspicion of involvement in terror activity. He was arrested at his home in the the Umm al-Shrait neighborhood near the Palestinian Authority capital of Ramallah. He had moved there after Israel revoked his permanent residency permit, forcing him to relocate from his home in the East Jerusalem neighborhood of Umm Tuba. He has been detained off and on over the years and brought to court multiple times for repeatedly violating the ban on him entering Jerusalem.

Abu Tir, 67, has spent 37 years of his life in Israeli jails. Upon his release, he told Al-Monitor, “I don’t know why I was detained and no one told me what I am accused of.” He added that he had spent the past seven months in the Ofer military prison and was not allowed to meet with a lawyer.

Abu Tir did not know when he would be freed, as the Israeli authorities often do not charge those under administrative detention with specific offenses, making it impossible for them to defend themselves. In addition, any evidence against suspects presented to military courts is usually classified. “That is why I don’t know the reason for the detention, nor the reason for the release,” Abu Tir said. During the interview, which was conducted over the phone, dozens of friends and neighbors — some of whom he barely knew due to his frequent incarcerations — came to his house to congratulate him on his surprise release.

A Palestinian security source told Al-Monitor that Abu Tir’s release was yet another sign of progress in contacts between Israel and Hamas over a long-term deal in the Gaza Strip. According to the source, the movement’s leadership understands it has been playing with fire ever since Israel threatened a widespread offensive against Gaza in the wake of the rocket fired Sept. 11 from the enclave at the town of Ashdod during Prime Minister Benjamin Netanyahu’s election rally. Under Egyptian mediation and following warnings to Hamas leaders, the sides renewed talks on the understandings they had reached in the past, resulting in an easing of Israeli restrictions and restoration of a measure of calm. A relative lull ensued on the Israel-Gaza border in recent weeks.

I first met Abu Tir at his home in Umm Tuba when he was running on the Hamas Change and Reform list, which scored a sweeping victory in the January 2006 parliamentary elections. In the interview, he claimed that the movement’s political leaders were not linked in any way to its military wing and had no knowledge of its planned attacks, since the political wing was tasked with strengthening ties with voters and building political infrastructure “to benefit the Palestinian people.”

Hamas' efforts to build political infrastructure are likely the reason Israel repeatedly detains the movement's political leaders in the West Bank — to prevent the movement from threatening the leadership of the rival Fatah movement in the PA. At the same time, Palestinian security forces take a tough line on Hamas activity in PA territory. Thus, both Israel and the PA, though not necessarily in coordination, are eager to crush any Hamas political organization in the West Bank before it solidifies. As far as they are concerned, the Gaza precedent — when Hamas overpowered Fatah and seized control of the enclave in 2007 — will not repeat itself in the West Bank.

Unlike the military wing, known as the Izz ad-Din al-Qassam Brigades, whose leaders live in hiding, the political activists are easy to apprehend. Leading Hamas political figures in the West Bank such as Abu Tir, Aziz Dweik, Hassan Yussuf and Nasser al-Din al-Shaer live normal lives with predictable routines.

Israel arrested Abu Tir along with dozens of West Bank Hamas activists and leaders following the 2006 abduction of Israeli soldier Gilad Shalit. But the arrests did not pressure Hamas to free him. Israel arrested additional activists in March 2009, claiming they were the Hamas leadership in the territories, where they were rebuilding the movement’s organizational infrastructure. Abu Tir was freed from an Israeli prison in 2010, but his residency in Israel was revoked and he was forced to leave Jerusalem. Shortly after, he was arrested once again for violating his ban on entering the city.

In June 2014, following the kidnapping and murder of three Israeli youths in the West Bank Etzion settlement bloc, all the movement’s leaders in the West Bank were rounded up along with dozens of Hamas activists released in the 2011 exchange deal for Shalit. Then, too, the mass detentions of political activists and leaders were designed to pressure the movement but had the opposite effect. The detention of Hamas legislative council members and of those freed in the Shalit deal was a decisive factor in the escalation that ensued and resulted in a 51-day war with Gaza codenamed Operation Protective Edge. At that point, Abu Tir had been in detention for over two years. He was freed in July 2015, telling Ynet correspondent Elior Levi upon his release: “I am in favor of calm in Gaza and even in the West Bank because it will benefit the Palestinian people’s human dignity.”

Back at home in October 2019, he told Al-Monitor, “I have spent more than half my life in Israeli jails. I am very tired, but am not broken. When they told me I was being freed, I did not ask questions — in any case, I would not have received any answers.”

Was he detained due to suspected terror activity, or to undermine once again the political strengthening of Hamas in the West Bank as Palestinian President Mahmoud Abbas weakened and PA suffered an economic crisis? We do not know, since Israel’s security agencies did not divulge the reasons for his detention and release.

Abu Tir does not know if there Egyptian-mediated understandings between Israel and the Hamas leadership in Gaza led to his release. Either way, one fact is irrefutable: This past month has been the quietest on the Gaza border in a very long time. Following the rocket fired during Netanyahu's speech in Ashdod, the Egyptians made it clear to the Hamas leadership that Israel would not stand for any additional provocation. The next time a rocket is launched into its territory, the Egyptians warned, they would not be able to stop Israel from sending forces into Gaza and possibly ending Hamas’ 12-year rule of the enclave. The warning was also directed at Islamic Jihad, to which most of the rocket attacks on Israel in recent months are attributed.

Hamas got the message and increased the number of its so-called “restraining forces” deployed along the border with Israel. This force has prevented several attempts by rogue elements in recent weeks to fire mortars at Israeli army patrols along the border. It also stops protesters seeking to confront Israeli troops at the weekly border fence demonstrations.

Israel and Hamas have yet to reach permanent understandings, but the sides appear to be advancing toward an arrangement and providing goodwill gestures — until the next snag.