A group of Palestinian teachers are protesting the Palestinian Authority's policy of imposing a political litmus test when hiring public school teachers, Linah Alsaafin reports from the West Bank. 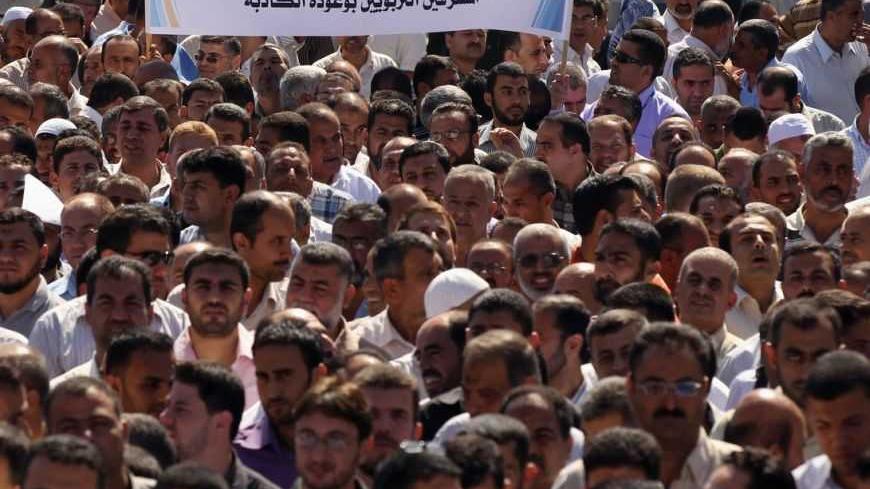 When 26-year-old Ayman Qawariq found a job as a substitute mathematics teacher in 2009 shortly after graduating, he never thought he would be dismissed barely a week later by the Palestinian Authority's Ministry of Education. The reason, they said, was due to Qawariq failing a security background check.

Ayman, a Hamas supporter, studied mathematics at the An-Najah University in Nablus and was not impervious to arrests. Along with his brothers Amjad, Majdi and Mahmoud, he was arrested several times by PA security forces on the back of his political affiliation. Two years ago, his brother Muhammad was killed by the Israeli army.

For the next three years after his suspension, Ayman tried in vain to find a job as a teacher, but was unsuccessful.

"Once you get suspended for security reasons," he said, "the Ministry of Education by policy does not rehire you."

As a last resort, Ayman went to Saudi Arabia in September 2012 to work as a teacher. Although the salary was “as meager as the one in the West Bank," he wanted to break out of the unemployment ring. While in Saudi, he heard that teachers who were suspended from Palestinian Authority government schools were getting reinstated.

When he returned to the West Bank and found that there was no truth to this rumor, he decided to take matters into his own hands. Gathering a small group of other suspended teachers and substitutes, Ayman held an open ended sit-in outside Prime Minister Salam Fayyad's office. The round-the-clock protest lasted from Dec. 4 until Dec. 13, with Ayman on hunger strike for the entire duration, resulting in seven trips to the hospital.

This is not the first time that Fayyad’s office has witnessed a protest. September saw widespread protests against Fayyad’s government in the West Bank due to the high costs of living and rising unemployment, with figures indicating that 127,000 people were unable to find work. Unemployment rates in the West Bank and Gaza Strip are as high as 21%, and with reconciliation talks between Hamas and Fatah stalled again, the economic woes remain prevalent despite the separate circumstances in the two territories.

Getting employed by the government, however, is not only based on academic and vocational qualifications, but also on the political background of the candidate.

Regarding the teachers in government schools, Ayman Qawariq indicated that the problems also lie within the terminology, and who the PA deems as ‘suspended’ or not.

The protest ended with a meeting with one of Fayyad's top advisers, Mohammed Jarar. A verbal agreement was reached and included the following:

However, contrary to the agreement, the Ministry of Education that same week issued a decree that promised to reinstate some of the suspended teachers, not immediately, but in May. The ministry also decreed that all suspended teachers had to retake the ministerial exam. In response, 20 to 30 protesters resumed their demonstration in front of the Council of Ministers again on Dec. 24, and went on hunger strike until Dec. 27.

Yasser Salah, a lawyer from the Independent Commission for Human Rights, pointed out that the system of hiring government employees based on security checks has been in place for years. It is also practiced by the Hamas government in the Gaza Strip in addition to the PA in the West Bank.

“The division in 2007 has only served to highlight these policies,” Salah said. “Government jobs are not open to everyone, and are given to people who have the correct political affiliation.”

The Palestinian Authority has over 22 ministries ranging from Ministry of Women’s Affairs to Ministry of Transportation. After Hamas wrenched control of Gaza from Fatah after bloody infighting in 2007, many Hamas supporters in the West Bank were fired from their jobs because of their affiliation.

The official number for teachers that are suspended based on their political backgrounds, which are masqueraded under the pretense of security concerns, is 563. Ayman Qawariq, however, estimates that the number is as high as 650.

“In November, the High Court released a verdict to cancel the policy of hiring people based on security reasons,” Salah said. “The act is illegal under law, but so far the Palestinian Authority has ignored the decree.”

The second sit-in, which lasted only four days, faced trouble from the police at the onset. Police would frequently try to break up the protests, bundling demonstrators in groups of three into vans, and dropping them off in remote areas far from the Council of Ministers, such as Birzeit on the outskirts of Ramallah.

“This is clearly violating an individual’s freedom,” Salah stated. “The police technically have no authority in obstructing a person’s right to peacefully protest.”

Another meeting was held on Dec. 30 with another adviser of Fayyad, Khalil Assaf.

The same agreement that was reached in the first meeting was again discussed and approved. But Ayman and the protesting teachers remain skeptical, saying they will wait until Sunday to see if it will be put into effect.

“If the agreement is not executed and we still failed to get our rights back,” Ayman said, “we won’t protest in front of the Council of Ministers anymore. This time, we’ll be taking escalating direct action instead.”