The Palestinian village of Beit Iksa lies on the Palestinian side of the Israeli separation wall, and its residents feel trapped in a large prison surrounded by Israeli settlements. 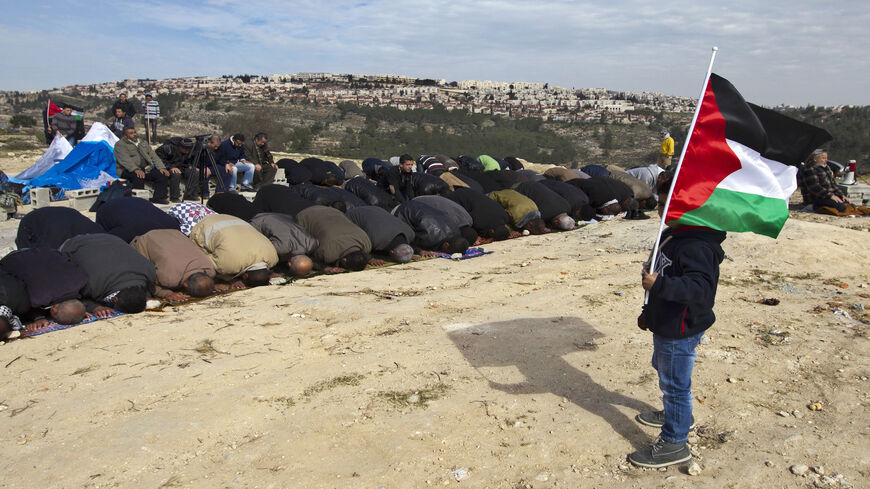 A young boy holds a flag as people pray during a protest of Palestinian activists over confiscated lands by the Israeli army in Beit Iksa, West Bank, Jan. 25, 2013. - Ahmad Gharabli/AFP via Getty Images

The Palestinian village of Beit Iksa is located 9 kilometers (5.5 miles) northwest of Jerusalem, and rises 670 meters (2,200 feet) above sea level. It links the city of Ramallah to Jerusalem, and is bordered by five Palestinian villages — namely, Biddu, Beit Surik, Nabi Samwil, Lifta and Qalunya — and is only 200 meters (656 feet) from the lands Israel occupied in 1948, which are now inside the Green Line. Its residents feel trapped in a large prison surrounded by Israeli settlements.

According to an article published in 2009 by the Israeli Haaretz newspaper, the Israeli government decided in 2006 to keep the village of Beit Iksa on the Palestinian side of the separation wall, even though according to the original route of the wall, the village is supposed to be on the Israeli side.

He said, “Since its occupation in 1967, the village has turned into a large prison isolated from Jerusalem and the cities of the West Bank and surrounded by the settlements of Ramot Alon, Mafi Sirte, Nitzfi Tafouh, Har Samuel and Atarot. Ever since, its residents started to migrate to neighboring areas. The number of people who migrated reached 35,000."

Kiswani noted, “The [Israeli] occupation controls the movement of residents entering and leaving the village through an Israeli checkpoint that is set up at the only entrance to the village, where residents are thoroughly inspected and their identity cards checked; the checkpoint gates close at 10 p.m.”

Kiswani added that in the event residents from other areas of the West Bank enter the village, such entry must be first coordinated with the village council. Visitors are required to leave their ID at the checkpoint until they leave.

The village council member noted, “The Israeli restrictions are not limited to residents, as they also apply to commercial activity. Merchants are prevented from entering the village, and the [Israeli] occupation only allows in 40 gas cylinders per week for domestic use. There is only one health center in the village that is open until 2 p.m., so if a resident requires treatment in the evening hours, they must wait at the Israeli checkpoint to be given permission for treatment outside the village. There are also two schools in the village, one for male students and one for females.”

Kiswani said, “The village is famous for its cultivation of legumes, fruits, grapes and olives due to the fertility of its lands. Most of its residents work in agriculture. However, the racist Israeli measures have led many farmers to leave their lands because 700 dunams [173 acres] are located in Area B of the West Bank and more than 7,000 dunams [1,730 acres] in Area C, which is subject to full Israeli security and administrative control.”

He noted, “The Israeli occupation erected a permanent military checkpoint at the entrance to the village in 2010, and residents are forced to travel to Ramallah and then to Qalandia checkpoint to get to Jerusalem on a two-hour journey to a city that is only 10 minutes away.”

Kiswani added, “Settlers and the occupation forces deliberately prevent farmers from reaching their lands. They uproot hundreds of olive trees, continuously confiscate village lands to expand the surrounding settlements and force residents to leave such lands. Settlers also make farmers wait for long hours at the only Israeli checkpoint in the village to reach their lands. The army forces farmers to stand 20 meters [65 feet] away from the checkpoint until they are allowed to pass.”

He stressed that “the Israeli measures affect all commercial, health and educational aspects of life in the village, as they also prevent teachers living outside the village from entering and in many cases delay their arrival to school. These are racist measures primarily aimed at displacing the remaining residents of the village.”

Nasser al-Hadmi, head of the Jerusalem Committee for Resisting Displacement, told Al-Monitor, “As far as the occupation is concerned, the strategic importance of Beit Iksa lies in the fact that it is located close to the Jerusalem municipality borders and is surrounded by many Israeli settlements, which facilitates the seizure of large areas of its empty lands.”

He said, “The [separation wall] has blocked the village of Beit Iksa from all other cities in the West Bank and Jerusalem, and this has led residents to suffer deplorable economic and humanitarian conditions amid restricted movement to and from the village. In addition, a number of agricultural areas have been turned into settlement outposts.”

Hadmi added, “The occupation is exploiting the so-called Absentee Property Law to control the Palestinian lands and properties abandoned after 1967. It is a law that made it easy for the occupation authorities to control these lands and properties under the pretext of protecting and preserving them until the return of their owners. However, the occupation has not returned a single land to its owners, as it has rather seized and transferred such lands to settlement organizations.”

He stressed that “the Israeli settlers do not settle for seizing a specific Palestinian village or city. The Israeli army has controlled large lands of the town of Issawiya in Jerusalem, as its residents struggle to obtain building permits for the construction of new houses.”