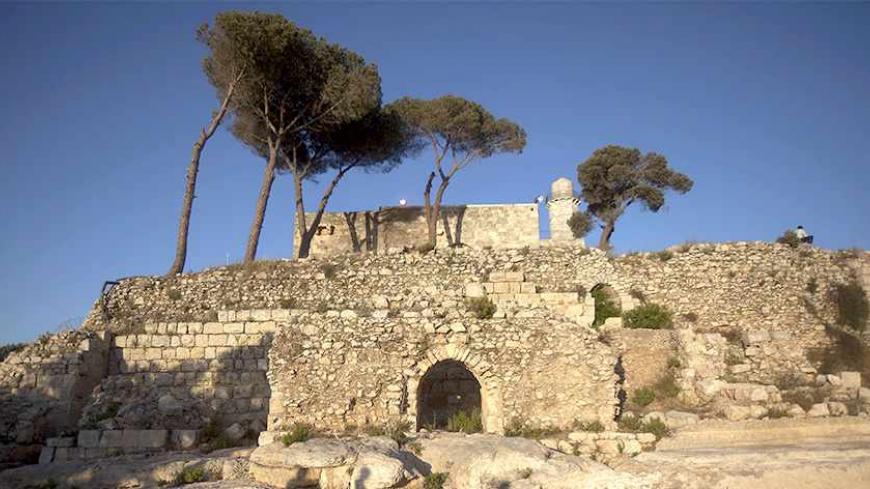 Trees surround Samuel's Tomb on the outskirts of Jerusalem, May 12, 2010. - MENAHEM KAHANA/AFP/Getty Images

Act One: Early morning in November. Dozens of people have congregated outside the doors of the Interior Ministry in Jerusalem. Security guards at the entrance to the building, which lies in the heart of the city’s western half, are surprised by the large numbers of Palestinians who want to participate in the Regional Planning and Construction Committee’s meeting. Only lawyers are allowed into the hall, where opposition to the creation of the “Slopes of Mount Scopus National Park” on the outskirts of the villages of Issawiya and a-Tur will be discussed. A veteran activist from Issawiya is demanding that the meeting be postponed until he and his friends are allowed access to the room, where the future of their lands will be decided. A police officer warns the man that he will be kept out if he doesn’t shut up.

The first person to speak is a representative of the Israeli Nature and Parks Authority, which initiated the project. He surprises all the attendees by telling them that his superior, Minister of Environmental Protection Amir Peretz, instructed him to request that the discussion be halted, now that he has been convinced that there is nothing of natural value in the region that is particularly sensitive. Though the minister’s position had been released earlier, it isn’t every day that the person behind the initiative asks to freeze his own plan. For the residents, who were eventually allowed access to the hall, it seemed for just a moment as if this was the end of the national park project, which would have prevented the expansion of the two Palestinian neighborhoods northeast of the city. But their hopes were gradually dashed. Most of the motions to oppose were rejected, and shortly before midnight, after 10 hours of debate, representatives of the Ministry of the Interior could notify Minister Gideon Sa’ar that the plan was on its way to be implemented. One hand erects ugly concrete walls around Jerusalem, while the other hand surrounds Palestinian neighborhoods with green parks. A few days earlier the prime minister had signed the release of 26 Palestinian prisoners. Now the minister of the interior was signing a plan to compensate the enraged right wing.

Act Two: The breathtaking view from the summit of Nebi Samwil, on the outskirts of the capital, 886 meters [2,907 feet] above sea level. More than a thousand people lived in this village when war broke out in June 1967. Most of them fled during the fighting. Israel demolished the village in 1971, and allowed the few remaining residents to relocate to the adjacent hilltop. Some 250 people now live there. They have since learned that the love Israelis have for green spaces knows no boundaries. In 1995, 3,500 dunams [865 acres] in the area were declared to be a national park. The space encompasses an impressive fortress and various antiquities, spread out over just 30 dunams [7.4 acres], as well as the alternative homes of the locals and most of the land that belongs to them.

The separation fence, built almost a decade ago, cuts through the park leaving a scar on the landscape. On the other hand, because of the threat posed to the natural environment, inspectors are quick to issue demolition notices for every home that the villagers dare to build, and orders to uproot any trees that they planted. A giant antenna with a cluster of remote controlled cameras on keeps tabs on everyone coming and going. The residents, who are officially defined as subjects of the West Bank, are forbidden to enter neighboring Jerusalem. On the other hand, their relatives who live on land under the jurisdiction of the Palestinian Authority are denied access to the village because it lies on the Israeli side of the separation fence.

Last week, the Superior Planning Committee of the Civil Administration discussed the local residents’ motions to oppose the general zoning plans. These plans completely ignore the current village and deal exclusively with the development of the tourist attraction situated on the site where the village once stood. The state representative went so far as to claim that the village doesn’t exist. In response, the villagers’ lawyer instructed them to walk out of the meeting with him. The committee’s decision has yet to be released, but based on past experiences, it isn’t hard to guess what it will be.

Act Three: South of Hebron. Residents of the local settlements greet the audience that has come to see their audiovisual presentation at the national heritage site, located right in the heart of the Occupied Territories. By national heritage, they mean Jewish heritage, of course. The revenue is intended exclusively as income for the Masters of the Land, who live on lands belonging to the inhabitants of the Palestinian village of Susiyeh, which appeared in Mandate-era maps dating from 1917. These lands were confiscated in 1986 for “public use,” declared an “archaeological site,” and later added to the jurisdiction of the young settlement of Susya, which was established nearby three years earlier. Needless to say, Palestinians who lived there in the past are forbidden to enter the site. After being expelled from their homes, they settled in caves and tin shacks they put up some 500 meters [546 yards] from the site. Since then, these residents have been expelled again on two separate occasions (in 1990 and 2001). The threat of being expelled yet again hovers over them. They tried to eliminate this threat by submitting five alternatives to the zoning plan to the Civilian Administration’s Planning and Licensing Subcommittee. A month ago their plans were all rejected.

And so, in the name of “national heritage” and love of nature, the handful of Palestinians stuck in land that is part of Area C (bordering the Green Line) have been shoved into one of the 165 isolated islands scattered throughout 40% of the West Bank, most of them in Area B (under Palestinian civil control), though a handful are in Area A (under Palestinian civil and security control). In a Report published in May of last year, the European Union described Israeli policy in Area C as “the forced transfer of the indigenous population.” If these plans were not realistic, they could be the basis of an absurdist play called The Diplomatic Process. The actors on stage (or what Minister of Justice Tzipi Livni calls “the room”) are the Israeli stars of negotiations, alongside the Palestinian representatives. This week the senior director, US Secretary of State John Kerry, will be arriving from the United States to see how the actors are doing. Inevitably, he will not have time to meet with the audience sitting in the back rows in Issawiya, Nabi Samwil and Susiyeh. While they are right in the midst of discussing permanent borders in the West Bank and Jerusalem, government planning committees sketch out new borders with national parks and archaeological sites. Who knows? Maybe when peace breaks out, the children of Issawiya will be able to play with the children of the Jerusalem neighborhood Givat HaMivtar in the binational park that is part of Jerusalem, the capital of Israel and Palestine. Happy is the believer.