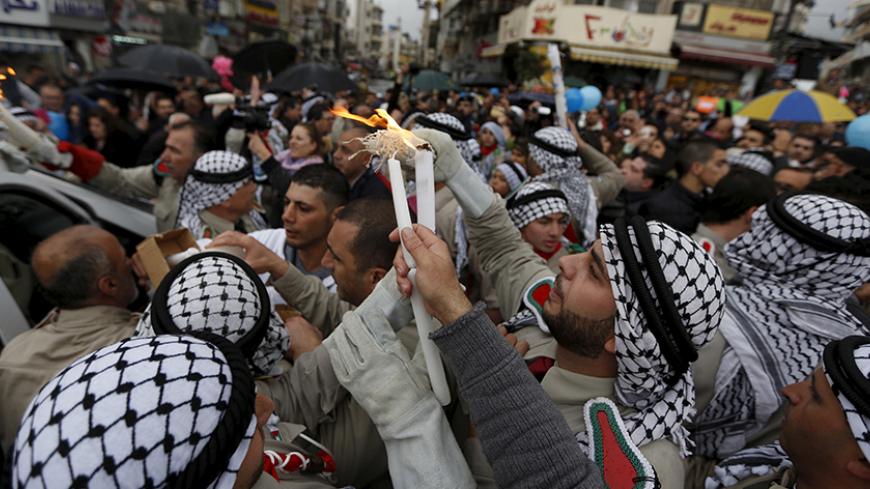 Palestinian Orthodox Christians light candles as they celebrate the arrival of the "Holy Fire" from Jerusalem's Holy Sepulchre in the occupied West Bank city of Ramallah, April 11, 2015. - REUTERS/Mohamad Torokman

Some members of Jerusalem's small Palestinian Christian community were worried for a while this summer by what appeared to be threat from Islamic State sympathizers ordering them to vacate East Jerusalem or be killed. The threat turned out to be nothing but hot air.

Concern began to emerge June 28, when leaflets bearing IS' insignia appeared in the Jerusalem neighborhood of Beit Hanina, calling on Christians to leave the city during Ramadan or be massacred on the first day of Eid al-Fitr, the feast at the conclusion of the holy month of fasting.

The Tarazi family has been part of the Greek Orthodox Church for centuries. Margo Tarazi, who works in a family-run tour agency in Jerusalem, told Al-Monitor that she was never much worried by the threat. “We Palestinians are united and aware, and this kind of thing doesn’t shake us,” she said.

The Palestinian leadership seemed to have reached a similar conclusion. In the weekly cabinet meeting held June 30, the government emphasized the unity of the Palestinian people. It did not stoop to mention the threatening leaflet itself, but the press statement issued after the session denounced the “dubious announcement seeking to harm the unity of the people and to incite a struggle in the holy city."

Hanan Ashrawi, a member of the Palestine Liberation Organization's Executive Committee, told Al-Monitor that the leaflet was most likely “planted,” arguing that more than 93% of Palestinians are opposed to IS. In an email exchange with Al-Monitor, she stated, “There are those who would like to exploit such a hateful phenomenon for their own ends: raising the spectre of sectarianism in Palestine — a place that has always been pluralistic, inclusive and tolerant — creating a sense of insecurity and fear among Palestinian Christians, particularly in Jerusalem, as a means for the further ethnic cleansing of the city.”

Ashrawi also noted, “So long as the cause of Palestine remains unresolved and the Israeli occupation and oppression of Palestine and its people persists, there will be many extremist and violent groups who will attempt to exploit it for their own ends.” On June 27, popular Orthodox Bishop Atallah Hanna denounced the leaflets as “dangerous, abusive and suspect.”

The well-respected Palestinian cartoonist Khalil Abu Arafeh said he did not feel the need to address the affair in his daily cartoons. “I know that the issue was rejected by a strong united national position,” he told Al-Monitor by email. “As far as I am concerned, I believe that it is my responsibility and that of others to fight against the spread of such diseases and not to underestimate these calls for division, expiation and sedition.”

It is not clear who was behind the leaflet. “Some blame the Israelis for doing this in order to sow seeds of division among the Palestinian people,” Abu Arafeh noted. Some Palestinian Christian leaders, however, suggested that the leaflets might have been genuine. “They might be sympathizers of IS who wanted to test the reaction,” a US-educated Palestinian from the Bethlehem area told Al-Monitor on condition of anonymity.

Although IS has no known public supporters in Jerusalem or the rest of the West Bank, one Islamic group felt the need to distance itself from the leaflets. The leaders of Hizb ut-Tahrir invited Palestinians from Bethlehem to a July 16 dinner in the largely Christian town of Beit Jala to celebrate the end of the Ramadan fast. After the dinner, leftist, secular Palestinians of Christian and Muslim backgrounds discussed Hizb ut-Tahrir's ideology, which includes establishing a caliphate.

A report by the journalist Najeeb Farraj summarized parts of the discussion and concluded that the meeting had been positive and reassuring in regard to the unity of the Palestinians. Farraj noted that Hassan Abdel Jawwad, a leftist politician, had wanted to know how Hizb ut-Tahrir views pluralism and diversity, while Bethlehem City Council member Antone Salman remarked how Palestine has seen Christians and Muslims living together for generations and that this religious diversity should be considered sacred by all.

Maher Jaabari, a Hizb ut-Tahrir ideologue, told the critical audience, “An Islamic state is a principle for people, and not just Muslims, and that the caliphate is human and not godly. Muslims and non-Muslims can live sharing the country’s resources.” Another Islamic ideologue, Musab Abu Arqoub, asserted, “Islam came to liberate people from slavery and worship of idols," and "Its rule must guarantee happiness and justice for the people.”

Regardless of whether the leaflet was distributed by a credible group, the worry among Palestinian Christians was unnecessary. During Eid al-Fitr festivities in Jerusalem, hundreds of thousands of Muslims visited the Old City of Jerusalem and prayed in Al-Aqsa Mosque. Not a single instance of a problem for the Palestinian Christian community was recorded. As Tarazi suspected, the threat against them was nothing more than a “bubble.”