Muslim and Catholic religious leaders observed the eighth centenary of St. Francis' pilgrimage to Jerusalem by visiting Al-Aqsa Mosque, illustrating what appears to be a golden age of relations between the religions. 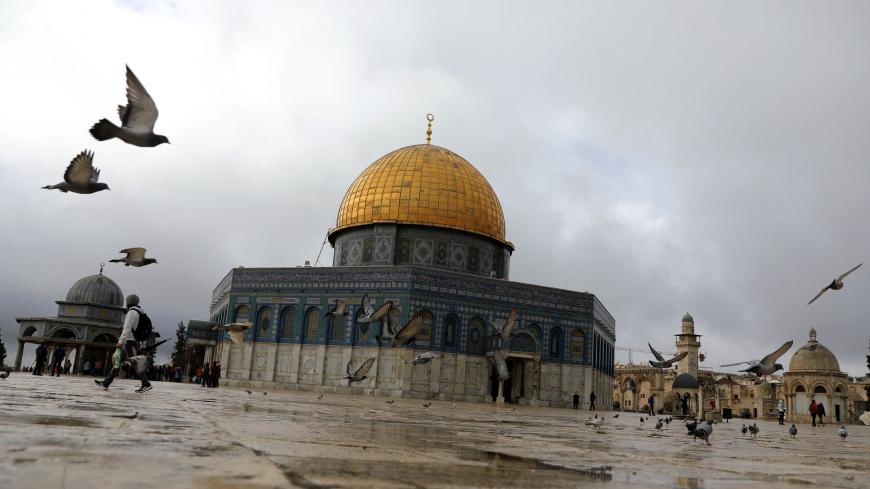 People walk near Al-Aqsa Mosque at the compound known to Jews as the Temple Mount and to Muslims as the Noble Sanctuary, in Jerusalem's Old City, March 14, 2019. - REUTERS/Ammar Awad

Catholic-Muslim communications appear to be experiencing a positive resurgence, as demonstrated recently by the visit of high-level Vatican representatives to Jerusalem’s Al-Aqsa Mosque.

Eight hundred years after St. Francis of Assisi visited Jerusalem, Cardinal Leonardo Sandri, prefect of the Congregation for the Oriental Churches, along with Rev. Francesco Patton, custodian of the Holy Land of the Franciscan Order, visited Al-Aqsa Mosque on Oct. 3 and met with the Islamic Waqf (Endowment) Council.

Both sides issued a seven-point statement that deals with the Hashemite (Jordanian royal family) custodianship of holy places in Jerusalem, the importance of preserving the status quo and support for the two-state solution.

Rev. Rifat Bader, a Jordanian priest and head of the Catholic Center for Studies and Media in Amman, told Al-Monitor that relations between Catholics and Muslims vastly improved following the Second Vatican Council (1962-1965) and the important decisions made regarding Catholic relations with others faiths, especially Islam and Judaism.

Previously, "No institutional follow-up of dialogue existed. All popes since have encouraged and supported interreligious dialogue between the Vatican and Islam,” he said. A member of the Latin Patriarchate in Jordan, Bader noted that Jordan was a pioneer in hosting dialogue meetings in the 1980s; Prince Hassan bin Talal often led them on the Jordanian side. The meetings alternated between Jordan and the Vatican.

Bader, also chief editor of the Catholic website Abouna.org, had focused his doctoral dissertation at Lebanese University on Catholic-Islamic relations. He noted that relations have at times been rocky. “The first [modern] challenge to Catholic-Islamic relations occurred in 1993 when the Vatican announced diplomatic relations with Israel and in 1994 signed a stable and official relationship agreement with Palestinians, and later a declaration of principles with the PLO in 2000, and a recognition of the state of Palestine in 2016. It also began official diplomatic relations with Jordan in 1994, which until then were at the level of an apostolic mission,” Bader said.

But Catholic-Islamic relations were much more severely tested in 2006 when Pope Benedict XVI quoted a 14th-century Christian emperor as saying the Prophet Muhammad had introduced only “evil and inhuman” ideas to the world.

The visiting cardinal didn’t refer to this incident but made reference to the Crusades. “Of course, no one would have thought of crusading today. In the year 2000, the Holy Father John Paul II asked for forgiveness for the Crusades,” Cardinal Sandri told Muslim leaders in Jerusalem at a press conference following the tour of Al-Aqsa.

Historian Mahdi Abdul Hadi, a member of the Islamic Waqf Council in Jerusalem, told Al-Monitor, “For 1,400 years … Jerusalem has been a model of Christian-Muslim coexistence. This was most recently confirmed with the Hashemite support for the reconstruction of the Church of the Holy Sepulchre in Jerusalem and the Church of the Nativity in Bethlehem, as well as the protection of 400 Palestinian Christian homes in the Old City [of Jerusalem].” Abdul Hadi praised Catholics for the schools they enshrined, where Muslim and Christian students have been studying together.

But Hanna Issa, head of the Islamic Christian Committee for Jerusalem and the Holy Sites, told Al-Monitor that Catholic-Islamic relations have not matured enough yet. “Hard-line Islamic ideology has not yet grown to accept Catholicism in a clear way. We still lack a language that truly accepts the other. While Catholics are not opposed to conversions — which their faith sees as part of the religious freedom of the individual — Muslims can’t accept that a Muslim can become a Christian," said Issa.

Bader concedes that dialogue alone is not enough to break centuries-old ideologies. “There were no major breakthroughs in dialogue meetings, but these meetings did help create a better environment,” he said.

Bader would like to see more concrete results. “We should not confine ourselves to dialogue meetings, but we should work on the ground, and this is what's happening under Pope Francis’ [interreligious dialogue]. Pope Francis is working with the poor and creating a much more powerful environment that has had discernible results in Christian-Islamic relations," he said.

"Every papal visit in our region has always included a visit to a mosque, and successive popes have been actively holding interreligious meetings as well as serious meetings with political leaders in Jordan and Palestine,” Bader noted.

Catholic-Islamic relations appear to be moving in the right direction. While such visits help create a more positive atmosphere, more courageous positions to bring about concrete breakthroughs that people of both faiths can appreciate are still needed.