The restoration works of the Church of the Holy Sepulchre were completed earlier this week, thanks to an agreement between the three main churches in Jerusalem. 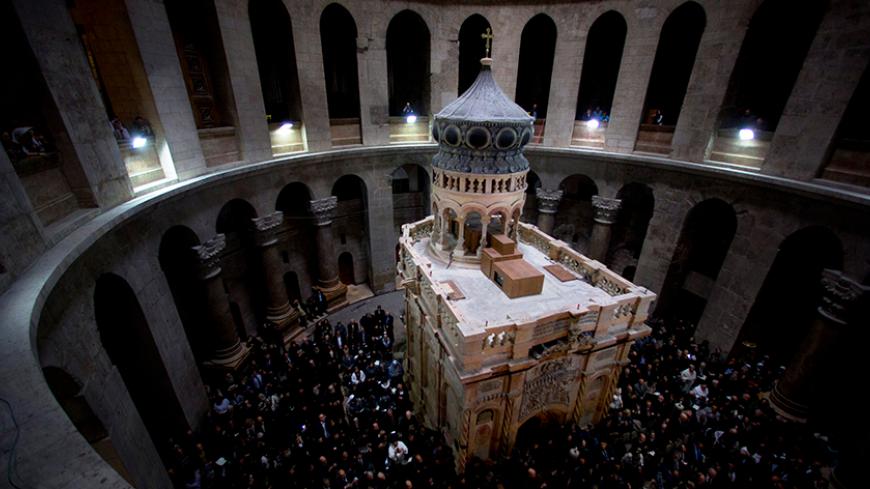 The restored Edicule is seen during a ceremony marking the end of restoration work on the site of Jesus' tomb in the Church of the Holy Sepulchre in Jerusalem's Old City, March 22, 2017. - REUTERS/Sebastian Scheiner

Amid turmoil, violence and occupation, something truly unique occurred in Jerusalem. Three churches, which claim direct ownership and control over the location where Christians believe Jesus Christ was buried and rose from the dead, worked closely together. The Greek Orthodox Church along with the Catholic Franciscans and the Armenian Apostolic Church all agreed to allow experts to restore the most holy site in all of Christianity. The result of this effort was unveiled March 23. The project, costing $3.4 million, was funded equally by the three churches, as well as by personal contributions from King Abdullah II of Jordan and Palestinian President Mahmoud Abbas, in addition to support from international foundations.

The division over the Church of the Holy Sepulchre goes back centuries. Unable to find common ground, the church's keys were deposited with Jerusalem's leading Muslim families. The Joudeh and Nuseibeh families are responsible for opening and closing the church every day, and they have been doing so for decades. The Status Quo Agreement was codified by way of a firman (decree) by Ottoman Sultan Osman III in the 18th century. The Status Quo document continues to be accepted by all the churches and governing powers.

Historians and church leaders say that it has been 200 years since the holy grave was restored. Hanna Issa, a Palestinian Christian historian and the head of the Islamic-Christian Commission in Support of Jerusalem and Holy Sites, told Al-Monitor that a combination of factors made it possible for the churches to agree. "There were many reasons why they agreed. The deterioration has reached a dangerous level that required treatment and the recent moves between Catholics and Orthodox, which were reflected in the historic meeting in February 2016 between the Pope and the [Russian] Orthodox Patriarch, also helped."

Bonnie Burnham, the former president of the World Monuments Fund, a New York-based nonprofit organization that helped raise funds for the project, told international news site UPI March 23 that this restoration was critical to save the site. "I would venture to say that if this intervention hadn't happened now, there was a very great risk that there could have been a collapse," she said.

The project, led by the National Technical University of Athens, began physically in May 2016. It was declared complete on March 22. Press reports from Jerusalem say the restoration team removed hundreds of years of candle soot, as well as marble slabs encasing a stone bench where believers say Jesus' body was placed after his crucifixion and death. Reports by the restoration team note that one slab was installed by Emperor Constantine the Great when the first church on the site was built; another was from the late-Crusader era in the 14th century. The marble slabs were put back in place.

Issa said the churches insisted that Israel stay out of the process from the start of the restoration works. He noted that a special agreement between Abdullah and Abbas signed in April 2013 confirmed Jordanian custodianship of Islamic and Christian holy sites in Jerusalem. The agreement also confirms Palestinian sovereignty in Jerusalem as the capital of the Palestinian state, he noted.

Jordan, which signed a peace treaty with Israel in 1994, has administered the Muslim holy sites in Jerusalem since 1967 through its Ministry of Endowments (Waqf Ministry). Jordan's role in deciding the permanent future of Jerusalem is stated in Article 9 of the Israeli-Jordanian peace agreement.

Wasfi Kilani, the executive director of the Hashemite Fund for the Restoration of Al-Aqsa Mosque, told Al-Monitor that the king's contribution toward the restoration of the church opened up for others to support the project. "What is more important, however, is the fact that the issue of the Hashemite custodianship of both Muslim and Christian holy places ensured that all obstacles toward the actual restoration were resolved."

Restoring an old church is nothing new. But when the church is the one and only church of the Holy Sepulchre and when the Christian leaders have been fighting for hundreds of years over who owns what wall or ladder or chapel, the restoration becomes a major news story. The people of Jerusalem, as well as Christians from near and far, celebrated this week a rare event that many said would be a miracle if it happened. For the Holy Land, miracles are not uncommon.