Turkish President Erdogan's ambition was not subtle as he stumped for himself at the Organization of Islamic States summit. 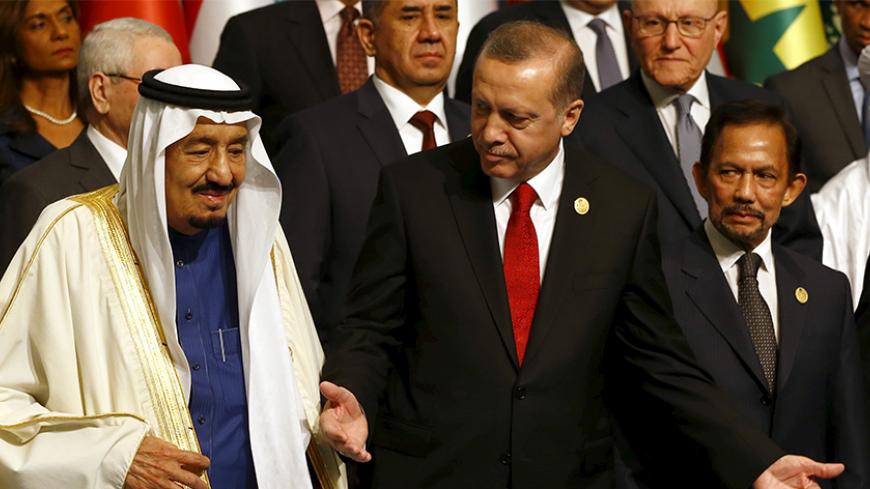 Erdogan hosted the OIC, which bills itself as the "Collective Voice of the Islamic World," in Istanbul for the April 14-15 summit. He used his opening address to blast the West again and to call on the Islamic world to unite to solve its own problems rather than relying on outsiders, who he said are only pursuing their own energy interests.

The gathering took place against a backdrop of sectarian violence in the Middle East that has resulted in bitter rivalry between Saudi Arabia and Iran, which was visible at the summit.

Diplomatic analysts were also quick to pick up on the message Turkey projected via the lineup in the traditional pre-summit portrait.

Erdogan, who is at the center of the picture, has Saudi King Salman bin Abdul-Aziz Al Saud to his right, while Iranian President Hassan Rouhani stands four down to his left, thus appearing to reflect the close ties Ankara is developing with Riyadh and its distance from Iran on various regional issues.

Erdogan's choice not to be flanked by Rouhani in the photo appeared to contradict the goodwill between Sunnis and Shiites he exhorted in his opening address later.

In his speech to more than 30 leaders — with the notable absentees being Egyptian President Abdel Fattah al-Sisi and Jordan’s King Abdullah, who are critical of Turkey’s role in the Middle East — Erdogan pointed to the urgent need to surmount sectarianism among Islamic countries.

Sectarian divisions were also apparent during the summit when Iran lashed out at Saudi Arabia for executing prominent cleric Nimr al-Nimr and other Shiite activists in January. In the final communique adopted at the end of the summit, Iran in turn was condemned for interfering in its neighbor’s affairs and for supporting terrorist groups.

The warm body language between Salman and Erdogan also played into the hands of those who argue that Turkey is turning its back on the West and increasingly looking to the Sunni world for new allies.

The OIC summit came just as the European Parliament issued a scathing report underlining that Ankara has not just slowed down the democratic reform process it committed itself to as part of its bid for European Union membership, but is backpedaling on reforms it had already enacted, particularly in areas such as freedom of the press and freedom of expression.

In his opening address, Erdogan did not waste the opportunity to blast the West, which seems to be his obsession. Pointing to the recent Nuclear Security Summit in Washington, Erdogan said the speakers there had referred to the terror attacks in Paris and Brussels but made no mention of similar attacks in Ankara, Istanbul or Lahore, although hundreds died in those attacks.

“This ambivalence is upsetting for us,” Erdogan said, going on to question why, as Islamic countries, they were expecting assistance from others (meaning the West) to solve conflicts and fight terrorism.

“If we don’t act, others do. But when they do, they do so for the sake of the oil there, not to bring harmony among us,” he added, calling for an Islamic arbitration organization and an Islamic version of Interpol to be established in Istanbul.

Erdogan also brought up another of his pet topics and railed at the composition of the United Nations Security Council, where he said there is not one permanent member to represent the Islamic world.

“It is essential for the UN to be reformed. It is our right to expect this if we want a just world,” Erdogan said. “It is not possible for a system that is based on injustice to contribute to global justice."

Erdogan’s address was noted for his references to “justice,” while making hardly any mention of democracy or the rights embodied in the UN’s Universal Declaration of Human Rights. His remarks were widely interpreted as referring to Islamic justice.

In their totality, Erdogan’s words to the OIC, whose presidency Turkey is taking over for two years, were taken as a pitch for the leadership of the Islamic world, a view supported and encouraged by the pro-government media in Turkey.

Journalist Kemal Ozturk, arguing in his column against what he said is a mistaken belief that unity cannot be secured in the Islamic world, said this view is “based on preconceptions that are usually bogged down under concepts such as treachery, ignorance, misery and sectarianism.”

Ozturk, a columnist for daily Yeni Safak, which supports Erdogan, pointed to the collective assets of Islamic countries that could be harnessed under strong leadership and indicated that this is a task for Turkey to fulfill.

“We must not forget that Turkey is the largest OIC country, its natural leader and older brother. Therefore, the task of reviving the unity of this organization and strengthening it falls foremost on Turkey,” Ozturk wrote.

It remains an open question, of course, whether all the countries in the Islamic world are supportive of the idea of Turkish leadership.

Political scientist and columnist Nuray Mert, an acerbic Erdogan critic, is pessimistic about the potential of the Islamic world, at least as represented by the OIC, for positive change that is in tune with the modern world.

In her critique of the OIC summit, Mert pointed out that “any claim to political legitimacy with reference to a religion is problematic.”

“It is the political power elite that defines and manipulates ‘Islam’ in terms of their interests. Political manipulation of religious legitimacy hinders criticism and accountability,” Mert argued. She noted that almost all OIC members are authoritarian states ranking low in human rights and high in corruption.

“Although they pose as if they are fighting against violence and radicalism, the religious political power of Saudi Arabia and the Gulf states is legitimized by radical and exclusionist interpretations of Islam [and] their support of radical Islamist groups for their respective interests,” Mert said.