Some Turks express a fierce desire for the United States to suffer through another civil war, which they see as likely or even imminent. 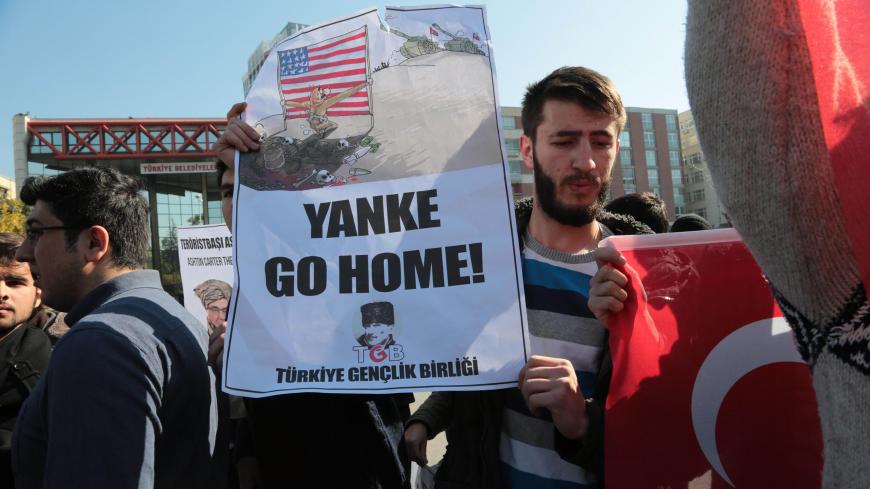 Members of the Youth Union of Turkey (Turkiye Genclik Birligi, TGB) hold signs and Turkish flags as they stage an anti-US protest outside the Parliament before a visit by the US Secretary of Defence in Ankara, Turkey, Oct. 21, 2016. - ADEM ALTAN/AFP/Getty Images

As much of the world watched anger spiraling out of control Aug. 11-12 in Charlottesville, Virginia, some Turks were rather pleased with the events. Even before US President Donald Trump fully indulged white supremacists with his words and before US media outlets mentioned fears of a possible civil war, several pro-government voices in the Turkish media said they were certain the United States is destined for a civil war or is even on the brink of one.

In the pro-government Turks' commentaries, three features are evident. First, most of these statements are brewing with a rather new type of anti-Americanism, rejoicing in the possibility of American suffering. Second, the statements reflect limited knowledge of US politics, and that knowledge sometimes is intentionally distorted. Last, the comments don't mention white supremacists’ hatred of Islam or Turkish-Americans; rather, the focus has been mostly on the supremacists' slogan “Jews will not replace us.”

Here are a few examples:

The most provocative piece came Aug. 14 from Hilal Kaplan, a columnist for the pro-government Sabah daily. The piece, titled “To the privileged, equality is torture,” claims that white supremacists are similar to “White Turks.” White Turk was a term coined by a journalist in the early 1990s to define the rich, secular ruling elite of Turkey. On the other side, then, are Gray or Black Turks, who are the poor, pious Muslim majority. In her piece, Kaplan struggles to explain how the White Turks and American white supremacists resemble each other, as she further claims white supremacists are middle or lower class — therefore logically more like Gray Turks of the 1990s. Then she says they are also WASPs, branding white, Anglo-Saxon Protestants as racists.

Kaplan writes in sound bites, posing a series of questions highlighting white privilege. She claims the United States has not been this close to civil war since the civil rights movement during the 1950s and 1960s. Her conclusion is that, to overcome domestic tension, Trump may become more aggressive in the international arena. Her bitterness against the United States on the social level comes out, particularly toward white Americans. Hence, she announces the approaching civil war without any proof other than the events in Charlottesville.

Another interesting example is an Aug. 14 piece by columnist Melih Altinok, also writing for Sabah, asserting hypothetically that an attempt to overthrow Trump would result in a civil war. After offering a muddled explanation of US domestic politics, Altinok says the possibility of a US civil war doesn't bother him because the busier the United States is with internal matters, the less energy it will have to stage coups in places like Turkey. Altinok concludes, “I cannot help but say it is a good thing that Trump, not [Democratic presidential candidate] Hillary [Clinton], won the election.”

On the same day, the English version of Sabah published a piece from Ilnur Cevik, a senior adviser to Turkish President Recep Tayyip Erdogan. Cevik had made headlines in May for saying, “Turkey may hit US forces in Syria by accident.” Cevik now argues that US domestic problems such as Charlottesville arose as the United States meddled abroad, and because of what he says is US support for terror organizations. In a way, this piece was a softened version of several other columns expressing that the United States being on the brink of collapse would be a sort of heavenly justice. Cevik finishes his column, which was based solely on the rhetoric of extreme-right movements, by saying, “Those who preach high values in the US seem to be at a loss [regarding] the white supremacist movement.”

On Aug. 15, Islamic daily Yeni Akit featured a stunning headline — “Bells of Civil War in the US” — claiming that white supremacists are demanding a return to slavery. The report starts with the accusation that the United States has helped provocateurs in Venezuela and Pakistan turn their streets into war zones, and now it is being pulled into a civil war.

One Twitter account echoed a common sentiment among a determined, bitter group on the social media network. Replying to prominent columnist Umit Kivanc’s tweet highlighting the realities of the Ku Klux Klan, someone using what most likely was a troll Twitter account said, “We want civil war in the US, long live the racists, long live the resisting blacks, fight for your honor.”

Another message that was retweeted hundreds of times was about US Secretary of State Rex Tillerson’s comments on how Alevis are discriminated against in Turkey. The tweet said, “His country [US] is on the brink of civil war and division, still he is trying to divide Turkey. How many endless enemies we have [internally and externally].”

Another post that was retweeted more than 180 times said, “They [protesters] burned the US flag. We are waiting for a civil war and division of the US. We will give all our support [for that].”

Several social media users were in awe of the body armor and guns of the white supremacist groups, noting they are civilians. One wrote, “The US is ready for a civil war. God willing, they will start consuming each other ... I support the Yankees.”

In all of these posts we see a deep pleasure derived from US domestic problems. An expat American social scientist who has been living in various Turkish cities for the past two decades spoke to Al-Monitor on the condition of anonymity. He said: “For years, Pew [Research Center] polls indicated persistent anti-Americanism here; however, there is also another dimension. A few years ago it was mostly directed against US government policies. Now we see a more intense hatred toward the people of the US and this is, sadly, coming from mostly those who have lived in the US and who are still connected. They make special shopping trips seasonally or even go to the US to give birth, so that their kid can be a US citizen. But then you see them brewing with strong hatred against all things American in social media or during your daily interactions.”

Indeed, over the last year several Americans have mentioned similar encounters in Turkey from vendors or acquaintances.

The scholar continued: “They do not hide their wish and even prayers for the US to experience civil unrest or turmoil, if not an all-out civil war. One technocrat joked how fast the US is becoming Syria. He openly declared his wish to see Americans suffer. The vengeance is real and deep. Once I confronted him saying, ‘But look, your family [son and grandchildren] lives in the US.’ He shrugged his shoulders and said, 'Well, they will move to Canada or the UK — we have money.’ And indeed this is a common sentiment across the board. The US is an easy target and US bashing has no consequences.”

Until the Qatar crisis erupted in early June, pro-government media were careful not to direct their criticism toward Trump. But now, Turks see the United States as working with Saudi Arabia, Egypt and others against Qatar. Anything American has become fair game for blame in Turkey. In previous years, people would say, “Well, we criticize the American government, not the people.” But white supremacists make them feel justified in hating all Americans openly.