The motives behind Turkey's decision to reveal US military intel

Turkish anger over US weapons being used by the Kurdistan Workers Party against its soldiers may be the leading cause behind the leak by its state-run news agency. 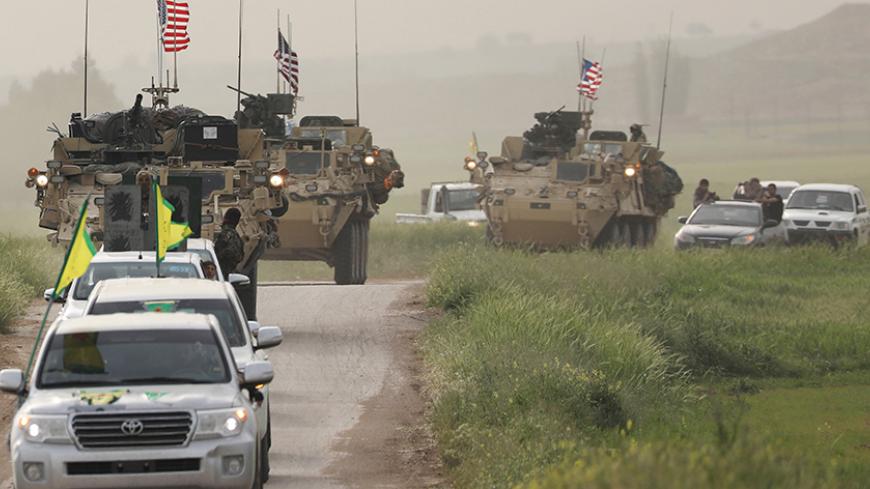 Kurdish fighters from the People’s Protection Units head a convoy of US military vehicles in the town of Darbasiya, Syria, April 28, 2017. - REUTERS/Rodi Said

On July 17, Turkey’s state-run Anadolu news agency (known as AA in Turkey) published an article prepared by three reporters titled “US increases military posts supporting PKK/PYD in Syria,” in reference to the Kurdistan Workers Party and the Kurdish Democratic Union Party. The report revealed crucial information on some of the US bases and on French and American soldiers in the region. The article and a detailed map appeared in AA’s English version on July 18. On July 19, the leak spread to international media outlets. The US military told the press that publishing such sensitive information was “professionally irresponsible.”

Ankara seems to have heard the Pentagon’s concerns. Interestingly, the AA story did not make it to the government’s social media trolls. Indeed, only a few short pieces can be found in Islamist media bragging about the leaks.

On July 20, Ibrahim Kalin, the spokesman for the president’s office, said the Turkish government was not involved in the publication of the specific news. Kalin added, “This is a report prepared by AA based on their own network,” indicating the report was prepared by the reporters exclusively. Since international pressure focused on endangering American and French soldiers’ lives through the exposure of the secret bases, Kalin commented that they had “no intention to risk the lives of any of our allies” and they expect reciprocity from all of their allies. Within an hour of Kalin’s speech, the English version of the story was taken off AA’s webpage. But the full piece can be found on other websites, and AA kept the Turkish version online.

So why did such sensitive information about US military bases appear in Turkey’s state-owned news agency, and why was it deleted after the Pentagon’s concerns were made public?

After Kalin informed the press that the Turkish government cannot be held responsible for AA’s reporting, Al-Monitor contacted senior government officials. All were in lockstep with Kalin. Still, their statements along with a few social media posts provided some clues to the background of the controversial reporting.

Al-Monitor talked with several Turkish reporters and seasoned journalists who have reported on Syria for decades. All were in agreement that such a report could not be prepared without support from military intelligence. The report itself is, indeed, one of the best presentations in AA’s recent history. The most pertinent question was, “Could AA publish any news without prior approval of the government?” Former AA employees, seasoned reporters and senior government officials could not confirm that was possible. There were exceptions, and this reporting could have been one that escaped proper state scrutiny prior to its publication, some sources said.

Still, reporters who are savvy enough to prepare such detailed graphics should have known that this information would be endangering the lives of allied troops in the fight against the Islamic State (IS). Indeed, Levent Tok, one of the reporters who prepared the story, told Bloomberg that the “United States should have thought about this before it cooperated with a terrorist organization,” highlighting the pent-up anger against the United States for its unwavering support of Kurdish militants.

American officials are well-aware of this and have gone on the record saying “Turkey is an ally” multiple times at different venues. The US struggle to balance the tensions between the Kurds and Turks in northern Syria is visible, as they have changed the name from the People's Protection Units (YPG) to the Syrian Democratic Forces (SDF). President Recep Tayyip Erdogan was not appreciative of this name change, either. He told reporters who asked about the matter, “Did anything change? We know well who is who. They [YPG and SDF] are both the same.” Erdogan added with confidence that Turkey knows where the SDF is operating.

A retired Turkish general who asked for anonymity told Al-Monitor, “The ostensible Turkish goal was to prevent an independent Kurdish state to emerge at its borders. Yet since the beginning of the Syrian civil war, Turkey lost several golden opportunities to gain the trust of regional and international players in Syria. The more erratic behavior Turkish politicians displayed, the more plausible an alliance with the Kurds appeared for the United States, as well as other players who joined forces against IS. Plus, the Turkish Armed Forces are demoralized, with its top ranks decimated.” In the last 12 months, the Turkish Armed Forces lost 40% of its generals and admirals due to purges.

The general added that the more Turkey lost in Syria, the angrier politicians and bureaucrats in Ankara became. The United States became an easy punching bag to rally public support. The loudest complaint in Ankara is the increasing US support for the SDF and the decreasing intelligence sharing with Ankara. One of the reasons for revenge was to prove to the United States that even if they do not share intelligence with Ankara, Ankara knows.

If this resentment and anger against the United States for cooperating with the Kurds is one reason, the second is Turkey’s growing anti-Americanism. On July 18, Abdulkadir Selvi, the most prominent pro-Justice and Development Party (AKP) columnist, penned a column titled “Unconventional approach in our relations with the USA,” which was based on confessions of a senior bureaucrat. He told Selvi what is echoed in private corners of Ankara: “We [the Turkish government] missed several opportunities, particularly when the Trump administration took over. We failed to convince them to work with us instead of the Kurds.” Anti-Americanism, strengthened with the age-old idea of “Euro-Asianism,” is gaining popularity in all government agencies.

According to Kadir Has University’s 2017 poll, anti-Americanism rose significantly last year. In 2016, the percentage of Turks viewing the United States as a threat to Turkey was 44.1%. In 2017, it went up to 66.5%. The United States ranks as the No. 1 threat in the eyes of the Turks. That is why it was quite interesting that the AKP did not exploit the news of exposing secret US bases in Syria into an opportunity to gain public approval.

Indeed, the English version of the news was removed from AA’s webpage, ostensibly on the recommendation of the Turkish Foreign Ministry. Pro-government figures on social media were either silent on the issue or struggled to downplay the matter. For example, Ragip Soylu, the Washington correspondent for the pro-government Turkish daily Sabah, initially acknowledged that the exposure seemed rather deliberate. He then deleted his tweets, as explained in Al-Monitor columnist Amberin Zaman’s article. On July 19, Soylu tweeted a map and wrote, “After Anadolu, German newspaper Bild exposed satellite pics of secret US airbase in YPG-held Syrian city Kobani. Seems very large.” Similarly, in Ankara, questions about the report were brushed off, saying there was no leak, that it was just sensational media attempts to blow the matter out of proportion. The information was claimed to be open source intelligence. However, there was no list of open source material provided to prepare this report.

Still, the struggle to cover the news indicates that Turkey is not ready to burn all its bridges with the United States. Yet, as long as these potent reasons for Turkey’s anger remain, the United States and other allies should expect rather unpleasant surprises.