Erdogan gets his wish from Trump in Syria, but now what? 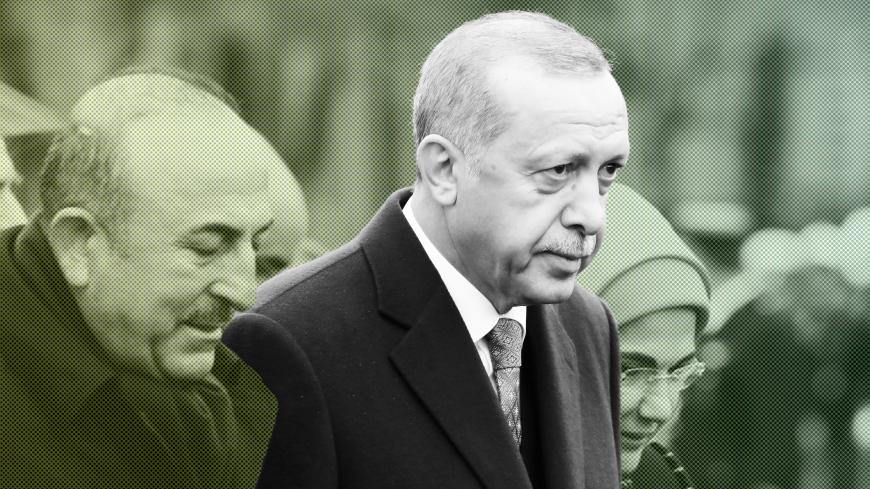 On Dec. 19, after the United States announced its troops will make a "full and rapid" withdrawal from Syria, initially jubilant voices rose in Ankara. Several observers were reminded of Turkish Foreign Minister Mevlut Cavusoglu's comments Dec. 16 at a Doha summit: “Trump is planning to exit Syria.” Ankara was informed prior to several other countries and even relevant US agencies. Turkish President Recep Tayyip Erdogan has often repeated his wish for the United States to withdraw.

Given all these facts, Turkey should be ready with its updated strategy for northern Syria.

Yet talk of a new strategy is nowhere to be found, even in the Turkish media. Rather, television shows and newspaper columns are focusing mainly on the United States: "What's the new US plan for Syria?" and “The US has been withdrawing from the Middle East for 27 years.”

A visible trend in the Turkish media is the lack of trust in America's commitment to "full and rapid" withdrawal. Yeni Safak in English, for example, published a piece Dec. 19 explaining how the United States is transporting Kurdish peshmerga (militia) to soften or halt Turkish strikes in strategic areas.

Al-Monitor spoke with retired and active military officials as well as senior bureaucrats and academics in Turkish intelligence and defense. Here we highlight four points as Ankara's most common and urgent concerns. Sources residing in Turkey requested anonymity.

First, Turkey loved the possibility (rather than the actuality) of US withdrawal from Syria. Since the beginning of the Syrian civil war in 2011, Turkey’s relations with the United States concerning Washington's involvement in the war have changed. Erdogan repeated called upon President Barack Obama to punish the Syrian regime, which had crossed Obama's "red line" by suspected chemical attacks.

During the Donald Trump presidency as well, Turkey welcomed US-led strikes on the forces of Syrian President Bashar al-Assad, and even asked for more rigorous attacks. Since the beginning of the Syrian war, Turkish demands on the US have oscillated between "Come in and topple the Assad regime" and "Get out and stop arming the Kurdish People’s Protection Units [YPG]." Once Turkey's government was convinced that a US presence wasn't sufficient to topple Assad, but rather was hurting Turkish security by providing logistics support to the YPG, Ankara started calling for the withdrawal of American forces. Erdogan says the YPG is affiliated with the Kurdistan Workers Party (PKK), which Turkey considers a terrorist group.

“Not believing the US withdrawal is really happening is easier than preparing the next step and trying to see who will provide air support, who will take over the US bases and how we will coordinate intelligence gathering and sharing. All these require new adjustments. Yet we're not even sure whom to work with as of now,” said a brigadier general.

Second, the US presence not only provided an excuse for failing to deal with the YPG, but also acted as a buffer between Turkey and all others. Since news broke in May 2017 that the United States was arming Kurds, Erdogan and his top echelons have not missed an opportunity to openly and harshly criticize the United States. Erdogan accused the United States of forming a Kurdish terror zone on Turkey's borders; he repeatedly asked what kind of an ally would do that.

Suat Kiniklioglu, a visiting scholar at the University of Oxford's Middle East Center and a former member of Turkey's parliament, said the US withdrawal isn't a clear-cut win for Turkey.

“The US presence allowed Erdogan to threaten war on the [Kurdish groups] without having to fight them. We may see increasing pressure on Erdogan to march into northeast Syria, which may help him in the local election in March — but it's not without risks, especially if it turns out to be a long-term affair,” he told Al-Monitor.

A security expert from Ankara said, “American presence in the region was a major force to limit Turkish military actions, but it also prevented a significant number of casualties in the Turkish armed forces. It helped solidify Erdogan’s alliance with ultranationalists here at home. As nationalistic feelings were pumped through pungent anti-Americanism, we also knew that Turkey couldn't do much more because it wouldn't want to militarily challenge the US. Now what will be the justification for not acting or, even worse, failure?”

Indeed, Turkey’s Kurdish problem and battle with the PKK has been lingering since 1984. "The US presence wasn't the cause of PKK terror, hence its withdrawal won't be the end of it," said a retired major general.

Despite the potential for quick victories against the YPG, the government's stated goal of eradicating terrorists, of wiping the area clean until the last terrorist is dead, isn't possible.

“We can weaken the YPG, but we can't get rid of the Kurdish problem without a political solution,” added the general.

For now, no one's sure what the next step will be, after hitting the YPG hard.

Third is the concern that the balance among Russia, Iran and Turkey will alter when the United States is out of the picture. So far, Turkey has been able to play Russia and the United States off each other. Deals to purchase Russian-made S-400s and US Patriot missiles simultaneously have been the most visible sign of Turkish oscillation between the two major powers.

“It's unclear whether Russia, Iran and the Syrian regime would be willing to give Turkey a free hand in northeast Syria," said Kiniklioglu. "Damascus would be eager to re-establish its sovereignty over the area rather than see it overrun by Turkey. This would place the issue into the laps of Moscow and Tehran. I suspect some hard bargaining will take place between Ankara, Moscow and Tehran in the coming days and weeks. Moscow may try to facilitate a deal between the PYD [Democratic Union Party] and Damascus." (The PYD is a US-supported, Kurdish nationalist group that Turkey considers the Syrian offshoot of the PKK, though the PYD denies this; the YPG is the PYD's armed wing.)

"Turkey is left alone with Tehran and Moscow, neither of which ever supported Turkish ambitions to get rid of the Assad regime," Kiniklioglu added.

Indeed, the US exit confirms the long-expected failure of Erdogan’s "Assad must go" demand.

The picture gets more complicated if one also contemplates how Saudi Arabia and Israel would like to contain Iran. Could Erdogan afford to challenge Israel and Saudi Arabia, and collaborate with Iran in Syria? Much of Turkey’s parameters now will be influenced by the other regional forces.

Last is the fear of new alliances and old troubles rekindled. For now, Turkey's big concern is a potential Kurdish alliance with Damascus. Although Cavusoglu has said there's a possibility Turkey might talk with the Assad regime, Erdogan has shown no inclination to do so.

“For decades, the PKK has thrived in Syria, and a similar setup is again possible if Kurds reach a deal [with Damascus]," said the security expert. "If Turkey invades and repeats its Afrin model, the Kurdish population would be pushed out. The population shifts would alter the precarious balance in the war-torn region and [could revive] the Islamic State or another radical militant group. Could the Turkish military handle a fight with all of these on its own at once?”

Imminent questions emerge, such as: Is Turkey's presence in the area welcomed or tolerated? How much more can Turkey expand in Syria and for how long? Will the Afrin model of population replacement be sufficient to create a secure zone between Syria and Turkey?

Turkish security vulnerabilities and fears are real and credible. Maybe that's precisely why most pro-government newspapers on Dec. 20 carried stories of alleged French support for YPG. If the United States really withdraws from Syria, Turkey could blame the YPG’s survival on other foreign powers.