Will US exit from Syria change terrain of Turkey's road map?

President Donald Trump's abrupt announcement that he will pull US troops out of Syria has Turkey reassessing the situation. 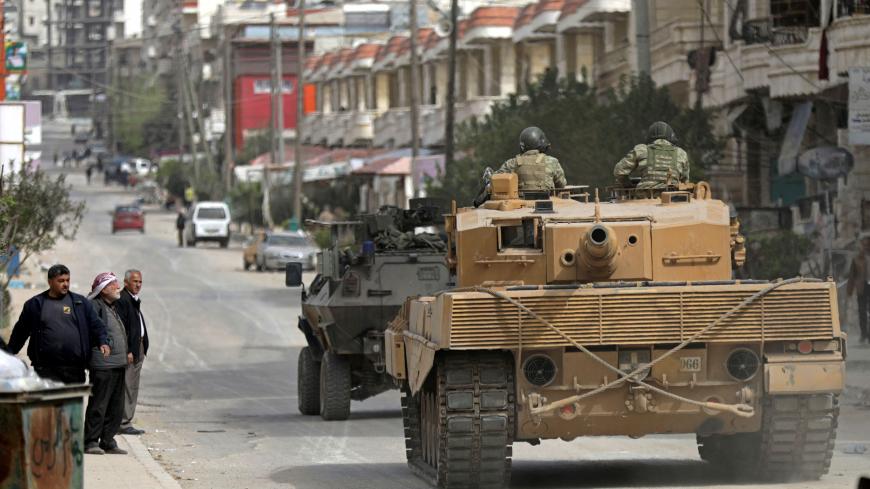 For almost four years, Ankara’s supreme priority in northern Syria has been to erode, if not totally eliminate, the military capacity of Kurdish militias it considers to be terrorists or terrorist-linked — specifically the Kurdistan Workers Party (PKK) and the People's Protection Units (YPG), which Turkey says is the PKK's Syrian offshoot.

The only barrier for Turkey appeared to be Washington, which has worked with the YPG in the fight against the Islamic State (IS). But now President Donald Trump has said he will withdraw US troops from northeast Syria. His Dec. 19 announcement not only surprised but also perplexed Ankara. A US exit could give Turkey the chance to grab a bigger piece of the northeast Syria pie — but many in Ankara are fully aware of the need for caution and prudence, because those who bite off more than they can chew can easily choke.

Trump's Twitter-based announcement is a novel contribution to the literature on exit strategy, and I don't know if military planners in Ankara are happy with this low-cost, low-risk approach. Now that Trump’s decision to withdraw has completely changed the operational picture on the ground, will they act on their wishes, or adopt a more realistic approach and act according to their actual capacity?

It's still not possible to explain what the full exit plan might be, if there even is one at this point. Also, nobody knows whether US Air Force elements currently controlling airspace over northeast Syria are withdrawing along with the ground elements, which would allow the Turkish air force to provide close air support for Ankara's anticipated military operation.

Military deterrence has three key components. The first component is to make sure your opponents are well-informed of your intentions. In a speech at the Turkish Defense Industry Summit held Dec. 12 in Ankara, President Recep Tayyip Erdogan had said, referring to the YPG: "We will start the operation east of the Euphrates in a few days to liberate it from the separatist terrorist organization. Turkey's target is never the US soldiers, but rather the members of the terror group."

After Erdogan made these remarks, which reflected Ankara’s decisiveness at the highest level, eyes turned to Turkish troop concentrations near YPG-controlled Manbij west of the Euphrates River; at Suruc, directly opposite Kobani; and Tell Abyad opposite Turkey’s Akcakale. For the past week, observers have been watching the border to detect when the operation might start. But Trump's announcement, which reportedly was made hastily during his Dec. 14 phone talk with Erdogan, changed the picture to the extent that, according to news reports, even Erdogan was baffled.

The Hurriyet report said the initial timetable for US withdrawal was between 30 and 60 days, which was later extended to as many as 100 days.

It's evident that such an abrupt withdrawal would leave YPG forces, the archenemy of Ankara in Syria, vulnerable to a possible Turkish military operation. Given the existing political picture, it's highly unlikely that the Democratic Union Party (PYD, the political arm of the YPG) could reach a deal with the regime of Syrian President Bashar al-Assad quickly enough to safeguard some Kurdish autonomy.

Many analysts both in Turkey and abroad think that as soon as the US military leaves, Turkey will immediately begin an air bombardment followed by a ground attack by elements of the Free Syrian Army (FSA) rebel group, supported by Turkish commando, special forces and armor units.

However, Al-Monitor gained insights in Ankara that seem to show just the opposite. First, one should note that neither pro-Erdogan media nor the elites among his ruling Justice and Development Party (AKP) in Turkey have attempted to sell Trump’s decision as an Erdogan diplomatic victory — which suggests cautious optimism, not euphoria, in Ankara.

We all know that the US security bureaucracy, or the "establishment," to use the Trumpian term, opposes a withdrawal. Ankara is now looking for answers to these questions: Will the security bureaucracy reconcile itself with Trump’s decision? Or might Trump change his mind at the last minute — under pressure from the establishment and European entities, particularly the UK and France — and preserve a military presence in northeast Syria?

The decision-makers in Ankara acknowledge that Turkey doesn't want the United States to abandon northeast Syria totally and immediately, as called for by Trump. It's likely that the emotional momentum that prevailed in Ankara before Trump’s decision has been replaced with more rational thinking. Turkish officials most likely are seeking to analyze the political climate in Washington, looking for confirmation that the United States will be on Turkey’s side in Syria, ready to help (at least in terms of airspace dominance, intelligence sharing and logistic support) and that the United States definitely has no long-term YPG plans anymore.

Ankara has thus announced it is suspending its anticipated operation for at least for a month to assess the new operational picture in northeast Syria to mitigate risks, consolidate diplomatic gains, monitor US sincerity and discuss this new strategic picture with Moscow and Tehran.

One should also note that top PYD officials in Europe (where the group opened diplomatic offices in April) are currently lobbying for a no-fly zone in northeast Syria and are trying to persuade policymakers in France and the UK not to withdraw their soldiers currently serving in the anti-IS coalition in northeast Syria.

The second component of deterrence is to deliver the message to the adversary strongly enough to change its strategic preferences. The Dec. 14 phone call between Trump and Erdogan, and Erdogan’s decisive message that Ankara expects the United States to cut ties with the YPG, seemed to fulfill the second component.

Third, after disclosing deterrence plans strongly and clearly, it's necessary to demonstrate the ability to carry out these plans. The next questions become, can Ankara still risk a military operation in northeast Syria? If so, what kind of operation can the Turkish Armed Forces (TSK) carry out after Trump’s decision to withdraw?

The Turkish military appears to be stretched thin, with its strongest units engaged in operations inside Turkey, as well as in northern Iraq, and northern and western Syria. Also, the Turkish air force continues its operational activities at a serious tempo. Because of this, it doesn’t look very feasible for Turkey to conduct corps-level operations that might require more than six months without redeploying troops from other fronts.