A Turkish state news agency revealed US troops' positions in Syria in what US officials see as further Turkish hostility over the US alliance with the Syrian Kurdish People's Protection Units. 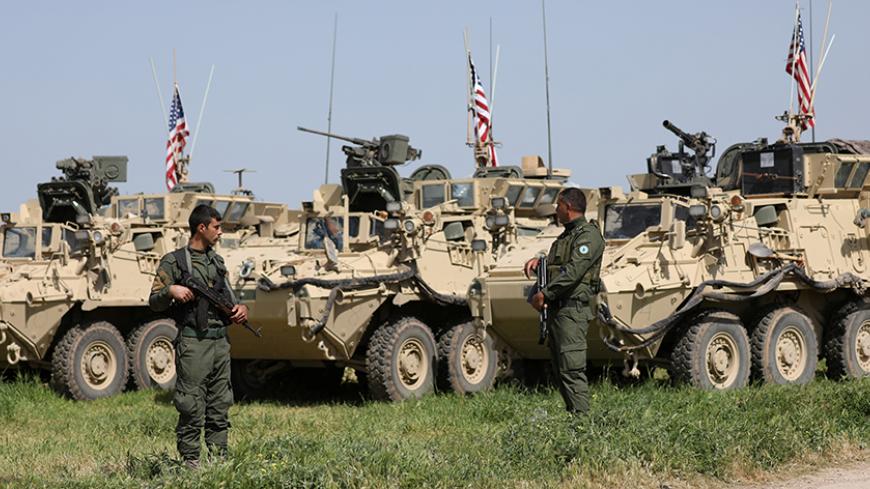 Kurdish fighters from the People's Protection Units stand near US military vehicles in the town of Darbasiya next to the Turkish border, Syria, April 29, 2017. - REUTERS/Rodi Said

Turkey’s state-run Anadolu news agency has revealed what it claims to be the locations of 10 US military bases in the Kurdish-controlled areas of northern Syria, a move that will likely put a further dent in the rocky relationship between the two NATO allies.  US officials told Al-Monitor that they had conveyed their concerns about the disclosure of sensitive information to Turkish authorities.

Anadolu dropped its bombshell complete with maps pinpointing the locations of US special forces in Kobani, Manbij and Rumeilan, among others, via its Turkish-language service this week. The story was picked up by local newspapers but generated remarkably little fuss considering the sensitive nature of its content. The report included the numbers of US troops in several locations and the presence of French forces as well who are working with the Syrian Kurdish People’s Protection Units (YPG) to combat the Islamic State.

Turkey is furious about the partnership, claiming that weapons provided to the YPG are winding up in the hands of the Kurdistan Workers Party, a Kurdish rebel faction that is waging war for self-rule inside Turkey. The claims were repeated at a meeting of the National Security Council on July 17, the day the Anadolu story first ran.

On July 18, Anadolu’s English-language service ran a translation, which was swiftly picked up by the Daily Beast and carried to an international audience.

Roy Gutman, who penned the Daily Beast piece, revealed the anger felt by the Pentagon. A spokesman for Operation Inherent Resolve, the US-led coalition fighting IS, asked Gutman not to share the information published by Anadolu, saying it would be “professionally irresponsible” and “put coalition lives in jeopardy.” A spokesman for the Central Command requested the same.

US officials regard Anadolu’s story as more churlishness from Turkey over the US-YPG alliance if not an outright hostile act. A spokesperson for Operation Inherent Resolve said that while they cannot independently verify the sources that contributed to the Anadolu story, "we would be very concerned if officials from a NATO ally would purposefully endanger our forces by releasing sensitive information.”

"We have conveyed these concerns to the Government of Turkey,” the spokesperson added.

To be sure, when paired with Turkey’s ongoing attacks against YPG forces in Afrin and its refusal to allow any humanitarian aid, not even baby formula, destined for Kurdish-controlled areas in Syria to pass through its borders, the story fits the broader pattern of Turkish attempts to torpedo the Syrian Kurds’ efforts to cement their newfound autonomy and any potential American support for it. The Anadolu story may well be intended as some kind of warning to the United States that it's watching its every move.

Ragip Soylu, the Washington correspondent for the pro-government Turkish daily Sabah, concurred in a (now deleted) tweet: "Exposing 'secret' US bases in Syria seems like a Turkish attempt to trouble the Pentagon for its cooperation with YPG that endangers Turkey."

In March, Turkey shuttered the Oregon-based Mercy Corps, which along with other Western humanitarian relief organizations delivering aid to Syria via Turkey became a target of a smear campaign by pro-government media outlets. The newspapers alleged that the outfits were staffed by spies and that their main beneficiaries were the YPG. As a result, all humanitarian relief supplies to Kurdish-controlled northern Syria are now being delivered via the Semelka border crossing in Kurdish-controlled northern Iraq.

A Turkish official speaking on condition of strict anonymity told Al-Monitor that a renewed request in June by the United States to allow aid through, including supplies for an estimated 200,000 Sunni Arab civilians displaced by the fighting in and around Raqqa, had been denied.

Geolocation experts contacted by Al-Monitor said military surveillance drones could have obtained the data in Anadolu’s story. Turkey is known to have many such drones flying over northern Syria. Some of the information could also be garnered through satellite imagery and even geolocation apps. The US government shares some coordinates with Turkey, if not at the level of specificity outlined by Anadolu, in order to deconflict their respective forces.

The need for deconfliction gained urgency after Turkish jets struck YPG targets in April near the northern Syrian town of Derik. US special forces were about 6 miles from the strikes and Turkey gave the United States less than an hour’s notice before carrying them out.

Editor’s note: July 19, 2017. This article has been updated to include a response from Operation Inherent Resolve.