The liberal voices among Turkey's conservatives, many of them women, will be the bellwethers of social change. 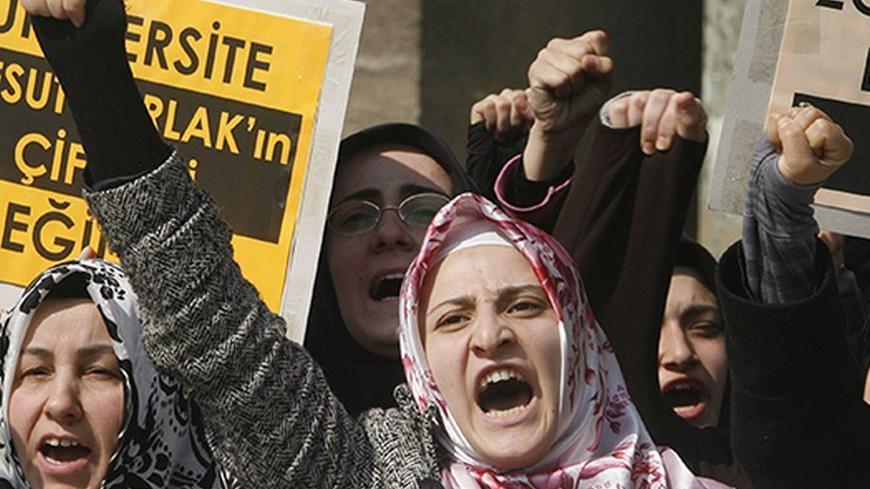 Demonstrators chant slogans during a protest in front of the Istanbul University in Istanbul, Feb. 29, 2008.

With the “democratization package” that Turkish Prime Minister Recep Tayyip Erdogan announced on Sept. 30, Turkey's observant, conservative women have gained the right to wear head scarves to work in state institutions. This means that such women, banned from the public space for almost a century, since Atatürk’s authoritarian cultural revolution, will now be able work in public sector jobs, such as teaching. For decades, Turkish secularists, as zealous defenders of a zealous from of laïcité — French-style secularism — have always feared and argued that covered heads automatically turn into closed minds. Does this latest development mean that Turkish society will become increasingly close-minded?

Well, not necessarily, if the women in question think like Turkan Yilmaz, who teaches at Istanbul’s Sabri Taskin Education and Application School, which serves children with learning disabilities. Yilmaz used to wear an Islamic headscarf everywhere except her job — until Erdogan’s reform set her free. Now she not only enjoys her newly gained freedom, but also advocates freedom for those who have ways of life very different from hers. In an Oct. 10 interview with Radikal, she said, “When we were struggling with the ban on the headscarf, many non-veiled women gave us support. So, [individual] choices should be respected. People can wear miniskirts or shorts if they want to. The decision about who should wear what should be made not by the state, but the individual.”

This unmistakably liberal view, which defends individual choice against official or collective mores, is shared by other observant Muslims in Turkey, some of whom, like Yilmaz, wear the traditional headscarf. One such Muslim is Fatma Bostan Unsal, a political scientist and one of the 64 founding members of the governing Justice and Development Party (AKP). In an interview with Taraf on Oct. 14, Unsal criticized AKP Speaker Hüseyin Çelik's comments on the “décolletage” of a television host that led to her scandalous firing.

“Discrimination against a woman who wears décolletage [a low-cut neckline] is discrimination against me as well,” Unsal said. She then went on to discuss an issue that many conservatives consider taboo — the rights of lesbians, gays, bisexuals and transgenders (LGBT). Unsal, in full Islamic attire, said, “All human rights are valid for them as well — the right to life, the right to own property. But they are being driven from their homes. What a shame! The new legal protection against hate crimes should cover them as well. In fact, they are the number one targets of hate crimes. They are more threatened than those [of us] who wear the headscarf.”

Moreover, in a manner similar to Pope Francis’ welcoming messages to gays, Unsal invited members of the LGBT community to the mosque. “They should be able to join the mosque community. If they feel uncomfortable and thus want to form another line [during prayer] we should tolerate this, too. When you exclude them, you don’t help them … Closing those doors [to the faith] will only displease God.”

Such liberal Islamic voices are numerous in Turkey, especially among veiled women, who have been the object of the fears and contempt of the secularists. One such prominent name is Hidayet Sefkatli Tuksal, an academic whose books include Traces of Misogynist Discourse in the Islamic Tradition. Widely respected as an “Islamic feminist,” Tuksal has been opposing authoritarianism in its secular and Islamic forms. During an Oct. 14 appearance on CNN Turk, she again opposed state intrusion in “different ways of life” and argued for the protection of individual freedoms.

It is not an accident that most of the Islamic liberals in Turkey are women. Having been oppressed by the secular state — which prohibited them from wearing their headscarves — they came to the conclusion that all dictates by the state, including, for example, Saudi or Iranian decrees forcing women to wear veils and headscarves, are wrong. Many of them also have reformist views of Islamic tradition. In other words, although their faith in the Quran and the prophetic tradition is unshakable, they believe that these basic sources of Islam should be (re)interpreted in the light of the modern age.

To be sure, not all religious conservatives in Turkey share the views of these Islamic liberals. Some are prone to imposing the “Islamic way of life” as they understand it. Many others agree with the basic idea of freedom, but still have reservations about its “limits.” In other words, Turkey’s religious conservatives are not a monolithic bloc that holds the same authoritarian view as the secularists sometimes perceive them. The liberal Islamic voices are also not just “good cops” covering for the “bad cops,” as conspiratorial-minded secularists sometimes think. Rather there is a real diversity of opinion, and the liberal Islamic voice serves as a vanguard for progress.

No wonder the governing AKP, which acts as an umbrella for conservatives as well as mainstream center-right voters, can reflect all these different tones in Turkish Islam, including the liberal one. For example, Bulent Arinc, vice prime minister and second in the AKP after Erdogan, delivered a reportedly pretty liberal message on women's dress in a speech on Oct. 16, during Eid al-Adha (Feast of the Sacrifice), asserting, “We [the AKP] do not interfere with [the lifestyle of] any lady. Her choice is our choice. The pressure in Iran to cover the head is wrong, as is the pressure to uncover the head. We have rejected both.”

Therefore, those who hope for a more liberal Turkey would be making a strategic mistake to consider all religious conservatives an obstacle to their goal. In fact, the liberal voices among the conservatives are perhaps a key asset that will help pave the way for a better Turkey, in which every voice and every lifestyle can be truly and fully free.

Mustafa Akyol is a columnist for Al-Monitor's Turkey Pulse and a columnist for the Turkish Hurriyet Daily News and Star. His articles have also appeared in Foreign Affairs, Newsweek, The New York Times, The Washington Post, The Wall Street Journal and The Guardian. He is the author of Islam Without Extremes: A Muslim Case for Liberty. On Twitter: @AkyolinEnglish