Who Are We? Iraq Struggles With Its National Identity

Iraq is struggling to establish a modernized national identity, a problem which is most readily apparent in debates over public school and university curricula. 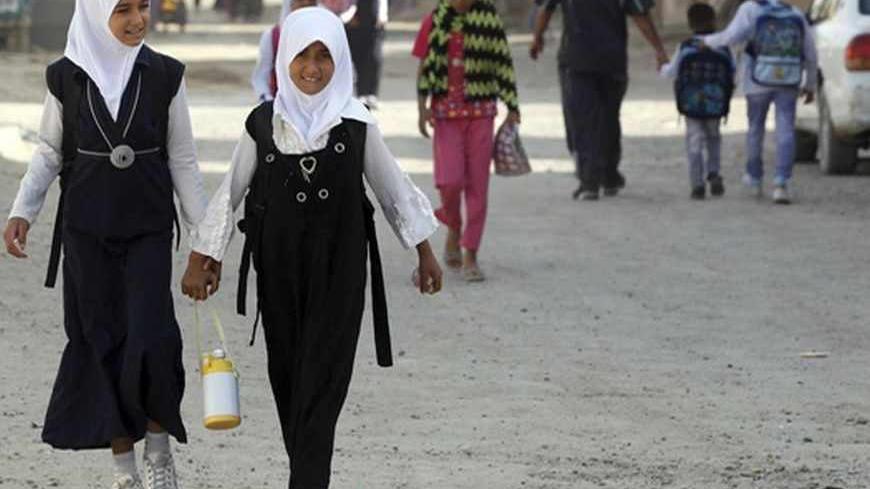 Students walk to class on the first day of the new school term in Baghdad's Sadr City, Sept. 23, 2012. - REUTERS/Mohammed Ameen

Iraqi Minister of Higher Education Ali al-Adeeb, who's also a leading member of the Islamic Dawa Party, took part in a frank television interview with the Al Baghdadia channel Aug. 4.

Among the questions asked of him pertained to the lack of focus on Iraq’s pre-Muslim history in school and university curricula. It's interesting because this time period is not the subject of dispute. It reflects Iraq’s unique civilization and identity, and may, in fact, be an adequate substitute for the subject of the country’s Muslim history, which is rife with sectarian and religious divisions and disagreements. In his answer, Adeeb did not seem enthused by the proposition, affirming instead that the correct alternative lay in teaching Islam in an open and unprejudiced manner that accepts not one but all interpretations of Islam and Muslim history. The minister’s answer did not come as a surprise considering his Islamic background as one of the few Iraqi politicians who has given the issue personal attention. He even published a book this year about humanities curricula in schools and universities.

In his book titled Humanities Curricula, Adeeb reaffirmed that one of the flaws found in the curricula adopted in the preceding Iraqi era was that its sole religious focus was limited to “presenting a solitary interpretation, to the exclusion of others. One voice was heard, while all others were left out completely.” As for history books, Adeeb said that they lacked “alternate views of historical events,” and did not recognize the existence of “others.” It is clear that the minister’s criticism is particularly directed at the manner by which school curricula were established during the rule of the Baath Party, whose main focus was to instill ideologies that revolved around pan-Arab nationalism, and whose interpretation of religion and history was Sunni-biased.

Adeeb added that the Baath Party invalidated “all naturally occurring identities, among which of course was the identity of Iraq itself. Meanwhile, it maintained and forcefully imposed the identity of the Baath Party upon all Iraqis.” To overcome this exclusionary legacy, Adeeb stressed the need to allow students access to more than one account about history and religion, without damaging “basic national principles.”

The debate about the relationship between identity and school curricula is not new to Iraq. It is as old as the Iraqi state. Since the issue of identity has always been at the core of the process to build the Iraqi nation, it is only natural that the matter of school curricula evolve into a contentious political one. The country’s prevailing sociopolitical conflict has mainly revolved around defining what it means to be Iraqi and its relations with other identities: Arab, Kurdish, Islamic, Sunni and Shiite.

One of the most famous controversies relating to this subject saw Sati al-Husri, who was in charge of education and curricula during the 1930s, disagreeing with a US committee that visited Iraq to assess the country’s school curricula of the time. The committee concluded that Iraqi school curricula were highly centralized, static, did not take into consideration social needs as well as were ignorant of social diversity and local specificities. These remarks did not sit well with Husri who had nationalist tendencies and wanted to use curricula to instill secular pan-Arab nationalist ideologies in students. Husri also believed that school curricula were an important means by which “to spread nationalist sentiments and faith in the unity of the Arab nation.” He was therefore of the opinion that concentrating on local and cultural specificities would not serve his integrative nationalist agenda.

As a result, since that date, teaching curricula in Iraq have been dominated by Husri’s school of thought, which reached its apogee during the Baath Party’s rule. From here stems Adeeb’s criticism of these curricula and his calls for the adoption of a new philosophy built upon “pluralism without negating the role of religion.”

There are two major problems, however, in this regard. First, the difficulty of establishing a pluralistic curriculum, which encompasses religious and historical issues that, themselves, are part and parcel of the ideological conflict that rages between Shiites and Sunnis, while, at the same time, emphasizing national unity. Second is the difficulty of completing such a task at a time when Iraq is the victim of a sharp sectarian conflict replete with religious, historical and mythological symbols that are used for sectarian mobilization.

Since 2003, this problem has emerged as one of the most contentious issues, around which revolved many accusations and suspicions. For since the Islamic-Shiite leadership figure, Khodair al-Khozaei, assumed the reigns at the Ministry of Education, Sunnis have objected to his attempts aimed at spreading “Shiism” and “to change Iraq’s history.”

Adeeb has endured similar critiques, among them accusations that he is sponsoring an ideological cleansing operation being undertaken in Iraqi universities, particularly through his strict commitment to de-Baathification.

Some Sunni accusations have even reached the point of inferring the presence of coordination with Iran to rewrite school curricula. This, in turn, compelled the Ministry of Higher Education to issue a statement denying the accusations.

Furthermore, some objections have arisen about history books lacking any reference to important eras and events that occurred in Iraqi history, particularly during the Baath Party’s rule, and the Iraq-Iran war, which many Sunnis still believe was a just national war.

In contrast, the Shiites are also not content because they feel that the curricula were not changed enough. Some movements within the Shiite religious establishment have voiced their opinion that curricula must be completely changed to break away from the Baath era, and that Shiites have the right to teach their community’s ideologies, which the former regime had repressed.

There are also objections about the continued use of Baathist terminologies and concepts in school books, especially their focus on Iraq being part of the “Arab homeland,” instead of viewing it as a country with its own distinct identity.

Yet, amid the torrent of accusations and suspicions, the school curricula department at the Ministry of Education continued — in cooperation with UNESCO — to strive toward changing the curricula, promising to complete the process next year.

However, it remains clear that the important thorny questions pertaining to the subject of identity and sectarian conflict remain open. Curricula still lack a clear direction in dealing with contentious issues and events, which, most of the time, have been ignored — such as the Baath Party rule after 1968 and the US occupation and its aftermath. That is to be expected considering that the Iraqi parliament has so far failed to adopt a new flag and national anthem, despite all the proposals in this regard.

The 1930s dispute between Husri and the US committee remains unresolved, because it is tied to a broader political debate about which curricula must be used to build the Iraqi nation. The dispute though has grown more complex, because the debate is no longer a purely intellectual one but one having to do with contrasting narratives pertaining to the definitions of identity and the Iraqi nation.