Although Iraqi political forces disagree about many common issues, there are also ideological divides based on exaggerated religious disputes. 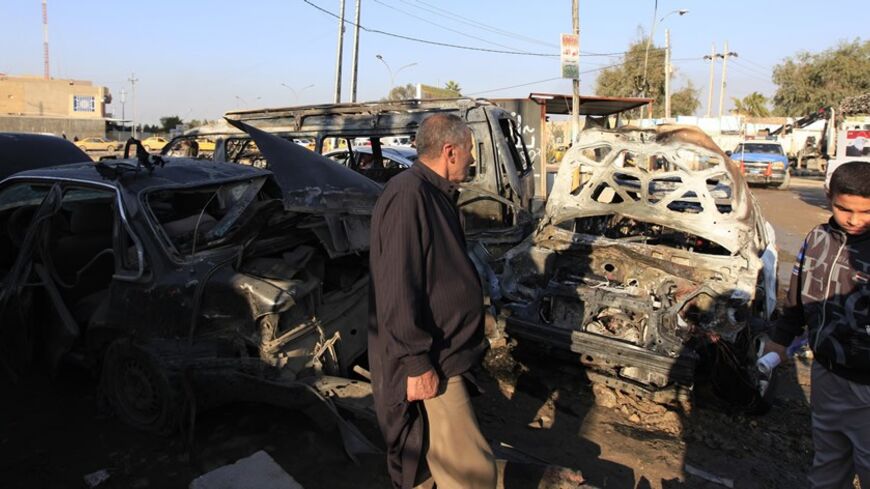 People look at the site of a car bombing in the mainly Shiite Abu Dsheer district in southern Baghdad on Jan. 20, 2014, a day that saw seven bombings kill at least 26 people in the capital as security forces battled Sunni militants in Anbar province. - REUTERS/Ahmed Saad

Besides the real causes behind the disputes in Iraq, there are a great number of conflicts revolving around figments of the imagination in the collective mindsets of the country's sects. These illusions have a great impact on the ground and feed the conflict, adding fuel to the fire of the hell taking place in Iraq.

The fighters of this war resemble Don Quixote, who went out on an adventure to spread truth, justice and noble values, only to embark on a delusionary path to fight enemies who only existed in his mind.

Everyone knows that Iraqis do not agree on how the nation's economic wealth is distributed and how politicians are running the country, among other issues. Similar disputes also exist in other nations. However, what differentiates Iraq from other countries is that so many disagreements only exist in the historical and religious memory of its sects.

Religion and history have been exploited to a large extent. The warring parties are prolonging the religious conflict by invoking historical struggles linked to ancient religious figures forgotten by many.

Thus, the ongoing clashes do not reflect the current dilemma as much as they reflect underlying hatred and sectarian animosity. In this way, a series of fabricated dualities appears that does not represent the reality of the conflict, all the while fueling and torching it. The conflict then becomes another scene of the fight between Hussein ibn Ali and Yazid, which took place 14 centuries ago and was mentioned in the Dec. 23, 2013, speech of Iraqi Prime Minister Nouri al-Maliki.

This is also true of the speeches of Maliki’s opponents, such as the resigned Vice President Tariq al-Hashem, who is presenting the current situation in Iraq as a conflict between Safavid Shiites and Sunni Ottomans that ended four centuries ago, in various statements published on his official website.

The purpose of these historical approaches is to project them onto the current situation and depict the rivals as longtime enemies. Therefore, grudges accumulate and Iraqis begin to see the other as an enemy who not only is fighting them but who also fought their ancestors long ago. These attempts to revive historical disputes date back to the era of the former regime.

The former regime established the ideology of the Iraqi-Iranian conflict as part of a historical journey that goes back centuries and millennia, starting with the conflicts of ancient history up until the last Iranian-Iraqi war of 1980-1988.

The regime used educational systems and research centers to entrench this ideological stereotype. Hundreds of research studies about the conflicts of ancient history, which took place between Mesopotamians and neighboring peoples of the east, were issued with this false and fake image.

Nothing has changed in this ideologized reality charged with historical rancor and hatred following the fall of the regime in 2003. Instead, things have evolved and expanded in different forms and directions. The Sunni and Shiite parties fed this ideologized image with new fire, stemming from a religious heritage that was not initially linked to the real occurrences of today. The reason is that these parties were formed under the assumption that religion represents the status quo in all its dimensions and inclinations. Consequently, the status quo should be analyzed and understood in a religious historical context of old conflicts. This resembles the former regime’s assumption that the ideological image of Arab nationalism within the intellectual framework of the Baath Party represented the status quo of the country.

The huge symbolic role of each of the conflicting parties’ names represents the truth behind the virtual conflict and the massive power of religion and history in sparking wars in Iraq. The names of many historical figures and heroes in historical tales have been adopted again to designate people or groups participating in the current fight. Mukhtar al-Thaqafi (622-687), Zoroastrians and Iranian Safavids are on one side of the fight, versus Umar Bin Khattab (579-644), Khalid bin Walid (592-642) and Salah Eddine al-Ayoubi (1138-1193). The resulting image is distorted and random and reflects the imaginations of the conflicting groups.

Public speakers on behalf of both Sunni and Shiite sects feel obliged to create generalizations and identities that only exist in their “Don Quixote-esque” imaginations. Sunnis have turned into one unified entity facing Shiites, and the same applies to Arabs facing Iranians or the western region facing the southern provinces, not to mention other illusions that have nothing to do with the historical reality or the current situation of the country. These misapprehensions conceal the presence of a large Shiite group that opposes the government’s military operations in Sunni regions or condemns the government’s political and military accomplices in the military and security confrontations against the Sunni regions.

The conflict in Iraq has turned into a conflict between idealism and realism, between madness and rationality and between illusion and reality. All sides of this ideologized conflict are defying the initiators of realistic and pragmatic projects. Moderate people propose projects that aim at solving the crises, but they are not widely welcomed. The loud voices of extremists of both sects have been drowning them out.