The history of Iraq and Iran goes back centuries, but looking at their relationship today through just that lens would be a mistake, argues Mustafa al-Kadhimi. 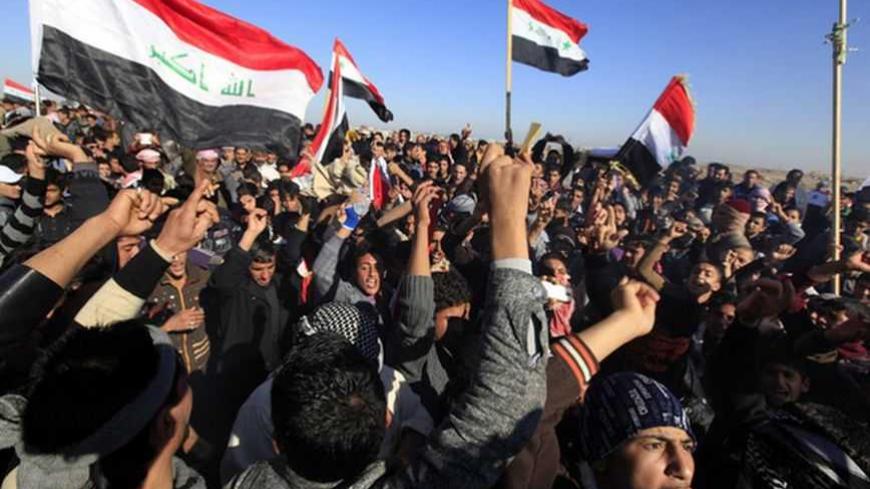 Iraqi Sunni Muslims wave Iraqi national flags during an anti-government demonstration in Falluja, 50 km (30 miles) west of Baghdad, on Dec. 28, 2012. Many Sunnis, whose community dominated Iraq until the fall of Saddam Hussein in 2003, accuse Maliki of refusing to share power and of favoring Shi'ite, non-Arab neighbour Iran. - REUTERS/Thaier Al-Sudani

One cannot understand Iraq’s modern relationship with Iran without looking at its historic roots, for its history is at the religious, social and psychological heart of the relationship, and is tied to highly complex geopolitics and demographic realities. However, examining the past alone will not bring one to any logical understanding of today’s reality, for one must always take into consideration the real-time factors of social mobility and advancing private interests that influence the political tack of nations.

The historical roots of the complex dynamics that pervade the relationship between these two countries and peoples run deep, all the way back to the Sassanid era. During this period, Mesopotamia was under the rule of an ancient empire that controlled the known world for a few thousand years. It selected Ctesiphon, not far from Baghdad, as its capital for centuries. However contributing geographic factors created a cultural conflict, stemming from the fact the lands of Iraq gave birth to civilizations and empires that influenced the value systems of that ancient world.

When the Muslim armies marched into Iraq, and subsequently annexed the Persian lands to their fledgling empire, the conflict began to take on different dimensions. Persian identity persisted within the Islamic civilization, but it transformed into an identity that mirrored and overlapped with Arab identity. Islamic culture could not acknowledge the struggle between the two competing identities, and preferred instead to blot out tribal identities with a unifying Islamic identity, exemplified in the famous phrase, "There is no difference between an Arab and a Persian, except in piety."

Iran officially became Shiite at the hands of Ismail the Safavid in the mid-15th century. He initiated a new phase of sectarian diversification within Islam. Since then, Iraq has been polarized between Safavid Shiite rulers and Sunni Ottomans, who considered themselves heirs of the Ottoman Empire. The power struggle often boiled over into bloody battles and wars in which the lands of Iraq carried strategic importance, and defending Iraq's Sunnis or its Shiites was the rallying cry for each of the rival factions.

Many political analysts and historians do not hesitate to use this historical period to frame the current relationship between Iraq and its neighbor to the east. At first glance, it seems like an ideal model to explain the Shiites’ historic inclination toward Iran and the Sunnis’ historic tendency toward Turkey and the Sunni Arab states. However, this framing is filled with systematic errors.

The identity claims of Arab nationalism have long distinguished Iraqi Shiites from their Iranian counterparts. In a similar manner, the religious identity that took root in Iraq, specifically in the city of Najaf, claimed religious authority over the Shiite world — in direct competition with the claims made by the Iranian city of Qom. The Iraqi school distinguished itself not by its national identity, but by its religious philosophy, insofar as it adopted the philosophy of religious moderation and the separation of the religious authorities from policymaking and governance. This approach came to be termed the “traditional Shiite theory,” whereas the religious authorities based in Qom embraced the “Providence of the Jurist” approach, which was later fully endorsed by Imam Khomeini during the Iranian Islamic revolution’s historic overthrow of the Shah in 1979.

In the midst of all these historical and intellectual upheavals, Iraqi Shiites maintained their unique identity. Perhaps it was this unique identity of theirs that allowed the dictatorial President Saddam Hussein — during the 1980-1988 war with Iran — to rally them to the nationalist cause and sustain the momentum of war. The main Shiite parties opposed Baath rule in Iraq throughout the 60s, 70s and 80s. Most prominent among them were the Islamic Dawa Party, the Supreme Council for the Islamic Revolution, as well as other groups, and they rejected the "blind" nationalism and "misleading" slogans Hussein was wont to promote. Many of them chose to live in exile in Iran, which in turn embraced them and provided them with much protection and support. This was at a time when Arab and international states tended to support Saddam's regime.

Iranian support for the Shiite parties, which in turn have grown and multiplied, continued until the fall of Saddam’s regime at the hands of the US military in 2003. This was despite the fact that Shiite parties, including the Dawa Party, had gradually been dispersed and divided and had left Iran for Syria and Europe.

Some analysts emphasize this historical period in order to explain the theory of "Shiite loyalty to Iran" during discussions regarding the "historic loyalty of Shiite parties to this country." These analysts succumb to other pitfalls due to their schools’ analytical dependence on a limited dialectical approach, which is no longer capable of explaining the realities of political developments.

Shiite parties have indisputably had a long history of connections with Iran, and these connections had a significant impact on post-2003 developments in Iraq. Iranian influence among these parties gave them ideal access to the Iraqi public.

But the assumption that Iran operates from a Shiite base in combination with ruling Iraqi parties is unfounded. Iran has equally significant historical ties with the main Kurdish socialist, nationalist and Islamist parties, even though the Kurds in Iraq are Sunnis and Iranian Kurds have been locked in a bloody, decades-long, nationalist struggle with the Iranian authorities.

On the other hand, Iran has equally significant relations with active Sunni parties such as the Iraqi Islamic Party and the Muslim Brotherhood, in addition to active Sunni figures such as Saadoun al-Dulaimi and Mahmoud al-Mashhadani.

It can be said that Iran authorizes the state’s stance in dealing with the changes in Iraq, despite having implemented flawed policies in this regard. What is not certain is if Iraq’s political groups control the state’s approach in dealing with Iran.

The defective aspect of this relationship is that Iran’s interests are clearly visible for all to see and are even announced outright. These interests belong to the political system and are not necessarily ideological, with personal and partisan interests often dictating many politicians’ stances regarding Iran.

The extremism manifest in the demand to be more hostile toward Iran is very similar to the extremism inherent in the demand that Iraq support all of Iran’s policies and form an alliance with it so as to divide the Middle East region along sectarian lines. Both demands display an obtuseness in their attempt to define the relationship with this important neighbor.

The truth is that it is improbable Iran will become Iraq’s enemy, just as it is unlikely to become an ally at the expense of Middle Eastern and international ties. Here lies the central question: Do Iraqis intend to form an unbreakable bond with their large next door neighbor whose politics have angered a large chunk of the world?

Indeed, those who turn to Iran in order to advance their political interests or to carve out a space for themselves on the map, realize that the volatile nature of the region means that no bond is ever unbreakable. Iran’s blessing is no longer an essential part of the Iraqi conflict. Moreover, economic pressures on Iran prevent it in the long-term from playing the same role it did in Iraq since 2003 and before. Thus, the experiment and the continuation of the experiment will flip the equation that determines Iraq’s political behavior. The state will impose its stance on political parties and individual figures. The dynamics of internal, regional and international conflicts will largely determine the type of relationship the two sides will share in the future, which will certainly differ from that of 2003-2013.

It is most likely that Iraq’s political center will be compelled to adopt balanced regional policies, as the nature of Iraqi society and its regional divisions offer them no other option. Moreover, this approach is clearly gaining popularity in Iraqi political circles. This is especially the case with the Shiites, who acknowledge that both history and the facts on the ground mandate this approach.

But adopting this approach as a long-term strategy for Iraq requires that Iraqi decision-makers establish some necessary facts on the ground.

Most notable of which is convincing Iran that a strong, coexisting and cohesive Iraq is the option that will best serve Iran’s long term interests. However this cannot occur until the regional and international parties that consider Iraq nothing more than Iran’s backyard are convinced otherwise by the enactment of more independent policies.

When considering the current state of Iraq, in which the “balanced” approach exists at the theoretical level but is still absent at the strategic level, it is of course easy to heap the blame on the Arab states that withdrew from the Iraqi arena, accusing Iraqi politicians of treason and collaboration. Likewise it is easy to blame the United States for neglecting to develop long-term civil movements and nationalist cohesion in Iraqi society. This provided space for sectarian and ethnic polarization to take root, resulting in an emergent political class that possesses weapons of the past and not of the future.

A dialogue about an Iraqi–Iranian relationship based on two independent, sovereign nations engaged in mutually beneficial cooperation, void of rivalry or subordination, is the only dialogue available with any kind of future. It is the only path available to the two countries if they are to avoid the trappings of both permanent and temporary bonds.