Al-Azhar curricula is being updated following accusations of extremism, which has caused controversy among religious thinkers and authorities. 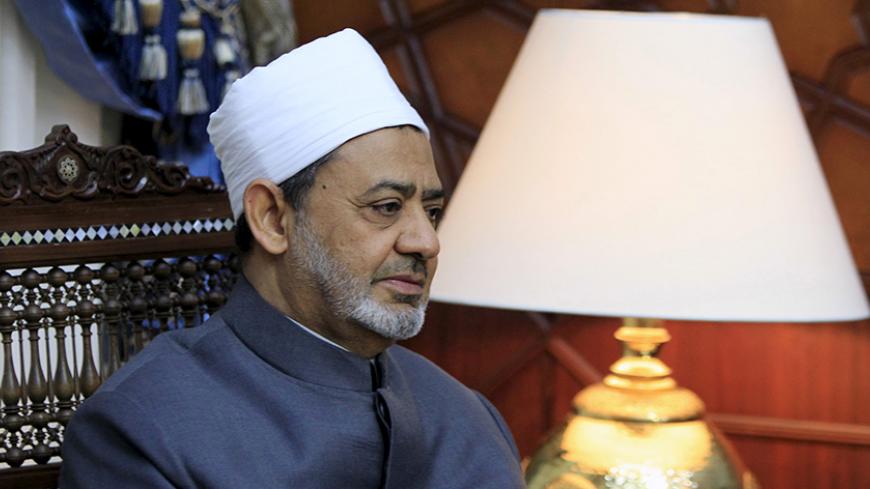 CAIRO — Egyptian President Abdel Fattah al-Sisi received Sheikh Ahmed el-Tayeb, the current Grand Imam of Al-Azhar, to discuss Al-Azhar’s efforts to counter extremism on May 27. Following the meeting, the Egyptian presidency issued a statement that same day that read, “President Sisi stresses the need for Al-Azhar to continue to play its role in straightening out the religious rhetoric and eliminating any misconception to fight terrorism and extremism.”

The statement also stipulated, “Tayeb discussed the steps that Al-Azhar has introduced to reform its educational curricula, and to keep them updated.”

The meeting between Tayeb and Sisi opened the door once more to the debate on Al-Azhar’s curricula and whether or not they are up to date for the current times, and whether they include materials that could promote radical ideas.

This is not something new. Egyptian pro-regime journalists have stated on many occasions that Al-Azhar’s curricula promotes terrorism.

Among these journalists is Ibrahim Issa who said that Al-Azhar provides an environment conducive to terrorism. His colleague Youssef al-Houssaini concurred, saying that Boko Haram members are Al-Azhar graduates.

Ahmed Zarea, spokesperson for Al-Azhar University, spoke to Al-Monitor and denied these claims of terrorism. “Al-Azhar’s teachings are not supportive of terrorism. These curricula have been taught for over 1,000 years, while terrorism emerged only recently,” he said.

“Claims that Al-Azhar’s teachings include terrorist ideas are nothing but media campaigns to downplay Al-Azhar’s role, and even Islam itself. This is especially true since world leaders and thinkers studied Al-Azhar teachings when they were students,” he added.

Zarea pointed out that current Iraqi President Fouad Massoum and the late Egyptian novelist Taha Hussein are both Al-Azhar graduates.

As for the need to update Al-Azhar teachings, Zarea said, “This would be done to make the curricula compatible with the latest discoveries, not because [the curricula] include terrorist ideas, and to highlight Al-Azhar’s views on modern sciences.” He stressed that the update “is related to the technique and educational tools and not to the essence of the teachings.”

Zarea did not deny the fact that some of Al-Azhar’s materials are out of date. “Heritage accounts and stories do not belong to the current times, and we do not need to integrate them in the curricula.”

Kamal Mugheeth, an educational expert and researcher at the National Center for Educational Research in Cairo, does not share Zarea’s opinion. “Al-Azhar’s doctrines were not originally put forth to be part of the educational curricula; many of those [doctrines] were written in central Asia and Iraq and aren’t fit for present times,” he said.

“Official educational curricula ought to be updated and taught according to the state’s national objectives, which is what Al-Azhar’s teachings lack,” he added.

Vice president of Al-Azhar University's Tanta branch, Ahmed Hosny, told Al-Monitor that Al-Azhar has several branches in most Arab countries but they all teach the same curriculum.

Zarea stressed that Al-Azhar’s materials indeed include ideas on extremism and terrorism. “The late Al-Azhar sheikh, Mohammed Sayed Tantawi, adopted a textbook he had authored titled 'Jurisprudence and its Principles,' rejecting any notion of terrorism. However, the book was removed from the syllabus by Tayeb upon Tantawi’s death, while teaching resumed with books upholding radical ideas,” he said.

Mugheeth considered that it was unlikely that any change to Al-Azhar’s curricula would have a positive outcome. “These [specific teachings that incite terrorist ideas] have been met with lack of action for a long time, which helped spawn extremists.”

Zarea rebuked such claims, saying, “Terrorist groups reject and do not recognize Al-Azhar in the first place, so how would it be possible to describe it as an extremist institution?” He also stressed that most terrorists who are arrested belong to non-Azhar institutions.

Salafist preacher Mohamed Abd el-Maksoud, known to be a supporter of the Muslim Brotherhood, said in a televised interview on El-Sharq TV that Tayeb is “ignorant and is here to secularize Al-Azhar.”

It should be noted that in October 2007, Tantawi decided to cancel a course on jurisprudence of the four imams at the elementary and secondary levels across Egypt and to stick to the jurisprudence rules only, which he wrote. This stirred much controversy and rejection on the part of Islamic movements. Muslim Brotherhood member of parliament Ali Laban described the decision as a "blatant interference into Al-Azhar’s curriculum." However, Al-Azhar considered it a reformist step to put ideological differences aside.

Saad al-Din al-Hilali is a professor of comparative jurisprudence at the faculty of Sharia and law at Al-Azhar University and a member of the National Specialized Councils Committee affiliated with the Egyptian presidency since 2006.

He told Al-Monitor, “I was required to look into the said book back when Tantawi was still alive. I commented that although the book was reformist [on the whole], it did contain doctrines that don’t belong to current times.”

Al-Azhar first announced that it was going to start modernizing its curricula in January 2014. Meetings to that effect continued to take place but were too spaced out. In March 2015, Al-Azhar announced it had reviewed curricula for all pre-university levels of education. A new phase of updates at the university level is expected to happen as a result of the meeting between Sisi and Tayeb.

Hilali believes that the current crisis of Al-Azhar curricula is caused by the failure to follow regulations providing for updating educational curricula every five years, which ought to be an automatic measure.

He added that Al-Azhar’s current updating process will have many gaps because it is being done hastily and under media pressure.

“Had we followed specific rules and regulations from the beginning, we wouldn’t have reached this stalemate. But, some of Al-Azhar officials are lazy, which led to the accumulation of many materials that are outdated,” he said.

Calling for updating Al-Azhar’s curricula is not something new and was not the outcome of the meeting between Tayeb and Sisi.

At a press conference during his visit to Kuwait in January 2015, the Egyptian president said, “Change will take time. We seek to reform Al-Azhar and not destroy it. We also seek to build a religious rhetoric that is far away from extremism.”

For his part, Islamic thinker Kamal Habib does not believe that Al-Azhar’s teachings promote terrorism, stressing that terrorism is the result of nontolerance, and the rejection of others because of bad media.

“Al-Azhar has existed for 10 decades, while extremism emerges within a favorable context only. Al-Azhar people are the least inclined toward violence because of their education system, which makes students always hungry for more knowledge,” he said.

Habib added that extremism originates outside Al-Azhar as some people misinterpret religious textbooks, which produces violence and extremism.

He said, “Some materials need to be renewed so as to remove the old doctrinal differences. Moreover, Western philosophies ought to be taught as well, to broaden the knowledge of students.” Habib believes that the updating process will take time and strenuous effort to be completed.

He also said that amending Al-Azhar’s curricula has become inevitable in light of the ongoing media campaign against it, in addition to the official rhetoric calling for renewing the religious discourse. However, the method of amendment, what needs to be taken out or added, remains a matter of contention among experts and decision-makers.