After having reviewed and updated its religious curricula, Al-Azhar is now modernizing the katateeb, its well-known Quranic schools, but many question the institution’s ability to succeed in the endeavor. 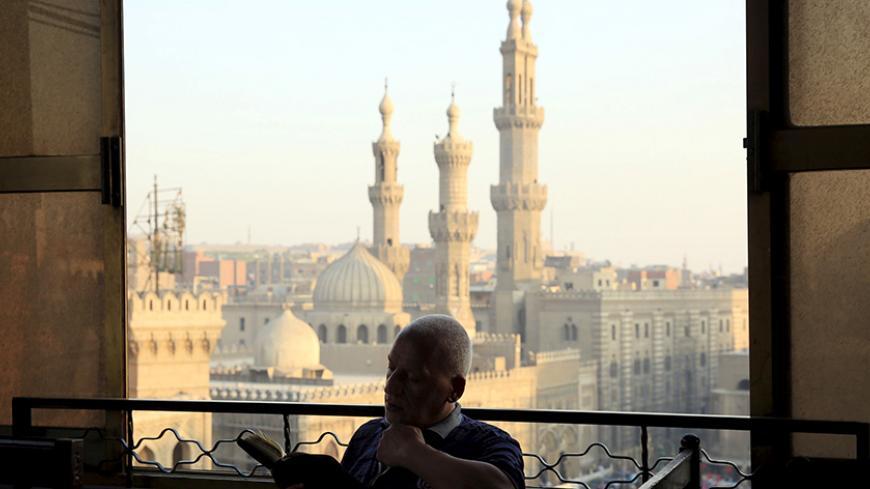 A man reads the Quran minutes before sunset as he waits to break his fast and have his iftar meal near Al-Azhar Mosque, in the old Islamic area of Cairo, July 9, 2015. - REUTERS/Amr Abdallah Dalsh

CAIRO — As a step toward restructuring its preaching and academic functions, Al-Azhar has decided to revamp and refocus on supporting the mosque's katateeb (Quranic schools). The move follows on the heels of the institution updating its religious curriculum, which is still a work in progress. Al-Azhar's "re-endorsement" of the schools appears to be part of the same plan to modernize the way Islam is taught. Many observers are skeptical, however, given the institution's outdated approaches to teaching religion and past fondness of Quranic books primarily for purposes of indoctrination. In this context, they wonder whether the institution's educational materials are up to date and question their potential to guide students toward moderation, rather than radical and extremist ideologies, and to develop their comprehension skills.

The katateeb served traditionally as educational platforms to help students memorize the Quran in addition to teaching them reading and writing. Mohammed Ali Pasha, the founder of modern Egypt, used the katateeb to revive Al-Azhar's role in education. Over the past few decades, however, interest in the katateeb has declined in cities as well as villages, mainly due to the financial situation of the Ministry of Awqaf leading to cuts in funding for the schools and the growth of public and private elementary schools.

Through its modernizing of the katateeb's teaching methods, it appears that Al-Azhar is seeking to contribute ideologically to the Ministry of Awqaf’s efforts to regain control of mosques in which the ideology of extremist Islamist groups had gained ground. Some sheikhs have complained that Salafists were taking control of the katateeb.

Mohammed Mhanna, a member of Al-Azhar's technical committee and supervisor of the mosque’s Sharia court, told Al-Monitor, “The decision to re-endorse the katateeb was based on the instructions of the grand imam of Al-Azhar, Ahmed el-Tayeb, to revive the institution’s ideological and preaching history and heritage.” He stressed the importance of such schools in promoting Al-Azhar’s moderate teachings. Mhanna also said that studying in the katateeb is not limited to people of certain ages, as it is open education, with elementary-, middle- and higher-level studies.

The re-endorsement of katateeb is part of a comprehensive plan that includes the establishment of curricula for teaching ideology and culture, regular seminars on issues raised in intellectual, cultural and social circles and a cultural salon, where hot topics, such as the relationship among religion and politics and globalization, are discussed.

One issue is whether the katateeb will be up to date with technological developments. “Modern teaching equipment is now being used, such as electronic white boards instead of chalk boards, while Sharia materials are being taught in foreign languages,” Mhanna said.

He stressed that Al-Azhar's mosque and Office of the Undersecretary are cooperating on monitoring the katateeb, with the undersecretariat taking the lead. “Every section in the institution will be supervised by a teacher who is carefully selected based on exams and tests results,” Mhanna said.

He also asserted that the purpose of the katateeb is not merely to have children memorize the Quran, but also to help them understand it. According to him, the schools are specialized in Quranic studies, modern science, jurisprudence, theology, the Arabic language as well as literature, thus offering an integrated education, not simply rote learning. Mhanna said the katateeb will not be limited to the mosque at Al-Azhar, but will become part of mosques throughout Egypt. The expansion will be undertaken in coordination with the Ministry of Awqaf.

Regardless, given that Al-Azhar's curriculum has in the past been viewed as based on indoctrination, some question the institution's ability to adopt a modern educational curricula. Iman Raslan, an education expert, said that Al-Azhar’s system of education is governed by Salafist and Wahhabi rhetoric. “Al-Azhar is not moderate, so how can it teach children about moderation. It is based on extremist ideology,” she told Al-Monitor.

Raslan also described an Al-Azhar education as being geared toward the poor in Egypt. “Poor people join Al-Azhar and are taught indoctrination, which is far from the true meaning of religion.” She also accused the institution of discrimination, because it does not accept Christian students.

Raslan considers the re-endorsement of the katateeb as a step in promoting religious rhetoric, not renewing it. “Al-Azhar, just like the Muslim Brotherhood, is recruiting children and instilling in them certain ideas and dogmas,” she said.

Gamal Qutb, a former head of the Al-Azhar Fatwa Committee, rejects the allegations that the katateeb are a means of promoting indoctrination. “Katateeb help [people] memorize the Quran and understand it, while excluding teachings that are in conflict with it,” he told Al-Monitor. He believes that with the proper education, students will be able to ask and discuss all kinds of issues. He also thinks that the changes taking place in Egypt will not hinder the goals of the Quranic schools. “On the contrary,” he said, “they will help young students be more productive.”

According to George Fahmi, a researcher at the Carnegie Middle East Center In Beirut, the re-endorsement of the katateeb will add nothing new to public education. “It could also be an attempt to make money without conveying any real message or an attempt to spread extremist ideas about religion,” he told Al-Monitor. Fahmi stressed the need to be extremely careful in choosing teachers and that thorough preparation courses for the imams are a necessity. Otherwise, he believes, the Quranic schools will remain traditional, based on indoctrination.

Al-Azhar’s decision to re-endorse the katateeb is part of an attempt to shift Islamic rhetoric and assert influence over mosques that had been infiltrated by the ideas and speeches of extremist groups. The institution's old educational approaches are out of sync with today’s generation, so finding success in renewing its religious rhetoric will depend on its ability to adapt and develop innovative ideas.