Egypt’s Ministry of Religious Endowments has opened an Islamic cultural center in each governorate to teach moderate Islam and fight radicalism; the volatile northern Sinai Peninsula, where the army fights religious fundamentalists, has three. 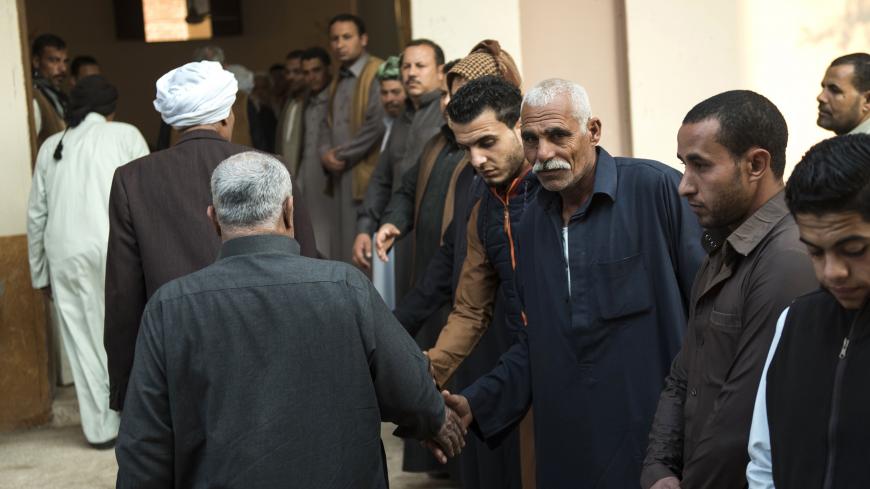 Egyptians attend the funeral of Fethy Ismail, the muadhin of Al-Rawda Mosque, who died in an attack by militants near the northern Sinai's provincial capital of el-Arish, Egypt, Nov. 26, 2017. - MOHAMED EL-SHAHED/AFP/Getty Images

Gaber Taye, head of the religion sector in the Ministry of Religious Endowments, told Al-Monitor that the opening of three Islamic cultural centers at the beginning of the school year was “an unprecedented step in North Sinai,” a governorate where the Egyptian army and security forces struggle to purge the area of the Islamic State and its affiliates.

“It is also the first time that three Islamic cultural centers open in a single governorate. The centers are located in the cities of el-Arish, Bir al-Abed and Hasna,” Taye said, adding that the ministry had planned for 30 students for each center. “But we have had [a total of ] 300 requests for enrollment in the governorate,” he added.

Northern Sinai is seen as a hub of violent religious extremist groups, which prompted the Ministry of Religious Endowments to open the Islamic cultural centers — also known as Awqaf centers — to offer a curriculum based on moderate Islamic teachings. The centers opened on Sept. 22, at the beginning of the school year. The opening of the three cultural centers — and promise of new ones — when there is only one center in each governorate shows the government’s intensified efforts to counter radicalism in northern Sinai. Classes at the centers are free of charge and admission is easier compared to the cultural centers in other governorates. The move comes at the same time as major development projects in the region and an intensified military operation.against terrorism.

Minister of Religious Endowments Mohamed Mokhtar Gomaa confirmed that the centers for Islamic culture in northern Sinai are in demand, underlining that this demonstrates the locals' rejection of religious extremism. In an Oct. 23 press statement, Gomaa said, “There has been a high turnout of people for the cultural centers since day one, which is further proof that life is returning back to normal in Sinai and that the residents renounce extremism, violence and terrorism. Scholars and imams from the ministry will instruct the students on the teachings of Islam.”

Taye noted, “Admission to the centers usually requires high academic credentials but we make an exception in northern Sinai where applicants with average grades are admitted. The students’ attendance of classes should not be less than 60%. Unlike centers in other governorates, people in northern Sinai are exempted from tuition fees.”

He said that the teachers are graduates from Al-Azhar University, the renowned seat of Islamic education. “They were selected among many applicants after taking different tests,” he noted.

Taye added that the centers are local alternatives to Al-Azhar University, since there are no branches of the university in northern Sinai. “It is a great opportunity for citizens to learn the basics of Sharia, Islamic jurisprudence and study the Al-Azhar curricula,” he said.

After two years of study, the center’s students — both male and female — will obtain a certificate, which would allow them to work as a religious leader in a mosque. Alternatively, according to Taye, they could use their acquired knowledge to educate family, friends and the younger generation.

Taye also stressed the role of the cultural centers in combating extremism, creating an open dialogue between students and teachers on Islam and reject radicalization of Islamic principles. He noted, “This [teaching of moderate Islam] is done through the curricula and direct contact with moderate Al-Azhar scholars, as well as through intellectual discussions that help refute terrorists’ ideas [that make use of Islam for their own means] and extremist rhetoric that does not accept pluralism.”

The idea of opening Islamic cultural centers was first introduced in 1989, with a large cultural center in Cairo and affiliated centers all over Egypt. The goal was to raise a new generation of imams and religious leaders who would address the public on the principles of Islam and provide guidance on daily issues.

There are presently 28 Islamic cultural centers in Egypt. The latest one opened Nov. 8 in Hurghada in the Red Sea governorate. Unlike the others, the center in Hurghada also admits foreigners who would like to learn the Islamic teachings, with courses taught in English, French and German.

Layla Mohammed, a second-year student at the Islamic cultural center in Giza governorate, told Al-Monitor that she is satisfied with the education and that the teachers are “excellent.” She said, “It is the first time I study Islamic studies.” Mohammed wants to work as a religious leader in the center, which has a section for female preachers.

Fatima al-Zahraa, who graduated from the center in Cairo, told Al-Monitor that she enrolled in classes because of her passion for the fundamentals of religion. However, she believes that two years is not enough for her to become a good preacher. She said that she does not want to preach, but instead would try to educate and influence her family and friends.

The Ministry of Religious Endowments has recently launched several other initiatives to combat radicalism. On Nov. 9, “Messenger of Humanity” was launched with the aim to spread the teachings of the Prophet Muhammad through sermons and lessons via satellite TV channels, public forums, workshops and book clubs. The project also aims to establish an international academy for training imams and preachers from different countries.

Another initiative, launched Oct 28, aims to create working groups with adherents and representatives of different religions in Egypt, who would discuss ways to combat prejudices and teach tolerance in their respective communities.

The ministry's "Homeland Without Addiction” campaign launched Oct. 6, which, according to Gomaa, aims to fight drug addiction and shed light on the link between the agriculture of substances used for drugs, terrorism and the recruitment of the youth.

Georges Fahmi, an Egyptian researcher at the European University Institute in Italy, praised the Ministry of Endowment’s efforts in combating extremism. But, speaking to Al-Monitor, he also underlined that the best way is not to wait for citizens to join such centers. Direct communication with the people must be ongoing, he said, stressing the need to use “local networks, in cooperation with imams, preachers, educational institutions and tribal leaders.”

He added, “This is why it is very important to train scholars and preachers in every area in the country, given the mindset and tribal composition in the country."