Egypt’s Ministry of Endowments opened an international academy to train preachers and imams with the aim of renewing religious discourse and eliminating extremism. 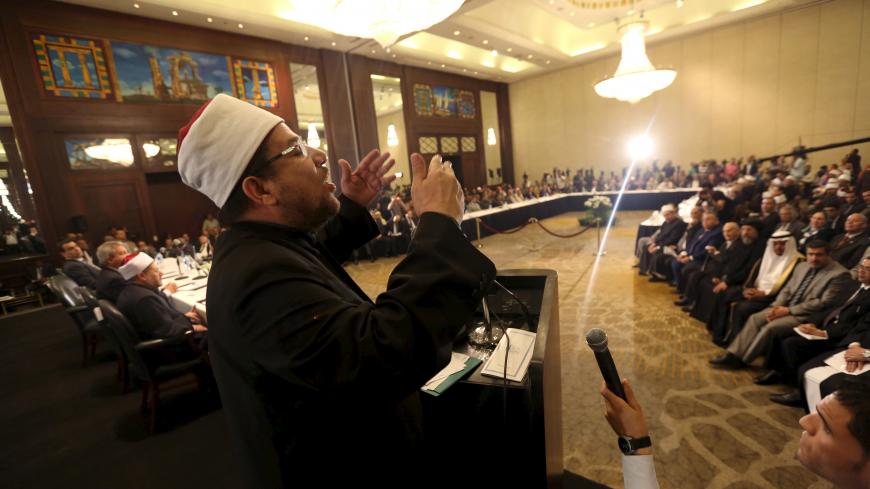 Gomaa said in his speech, “The IAA is a starting point toward moving forward with the call to renew Islamic discourse in order to face an intellectual stalemate and extremism.”

The IAA was built on an area of 11,000 square meters (2.7 acres) at a cost of 100 million Egyptian pounds ($5.6 million), funded by the Ministry of Endowments and fitted with modern equipment and foreign language labs, so imams can communicate with those in the West, as well as computer labs.

Among the international figures attending the inauguration was Saudi Minister of Islamic Affairs Sheikh Abdul Latif al-Sheikh. Sheikh said during the ceremony that the IAA is a great scientific foundation to establish the correct understanding of religion, and that the Saudi Institute of Imams and Preachers would launch training courses in cooperation with the IAA, although he did not specify whether these courses would be held in Saudi Arabia or Egypt.

Mohannad Khorshid, head of the Center of Islamic Theology at Munster University in Germany, said during his speech at the inauguration, “This is a very important step in support of Islamic enlightenment sponsored by Egypt. It will help spread moderate religious ideology and renew religious discourse. The IAA will train a large number of scholars and preachers from Germany and Western European countries.”

Sheikh Jaber Tayeh, official spokesman for the Ministry of Endowments and head of the ministry's religious department, told Al-Monitor, “The IAA consists of a number of buildings equipped to train both male and female preachers from inside and outside Egypt. They are trained by scholars from Al-Azhar who are known for their knowledge and mediation skills in order to raise the intellectual level of imams and preachers. The opening of the academy comes as part of the Ministry of Endowments' efforts to renew religious discourse in Egypt, an issue raised by President Abdel Fattah al-Sisi.”

He said, “What is new about the IAA is that it offers a six-month experience for imams that includes intensive training through an enlightened scientific curriculum that offers a moderate vision for renewing religious discourse and providing a new vision that will enhance the way they confront extremism and terrorism.”

Tayeh added, “This experience is a first in Egypt since it lasts [six months], unlike the ministry's regular trainings that last for no more than a week. It also provides good contact with imams from outside Egypt."

“When imams and preachers apply to the IAA, they are tested on their knowledge in religious sciences. After the imams are accepted, they are trained by university professors and experts in economy, politics and psychology,” Tayeh explained, noting that the training is comprehensive and not only limited to religion and imams are trained in different fields and taught foreign languages.

Tayeh said that the training is completely free, and that so far 130 imams have been accepted. The IAA can train 500 imams at the same time.

“It is difficult at this time to train all of the Ministry of Endowments’ preachers since there are over 54,000 imams and preachers, but eventually everyone will receive the training,” he added.

Tayeh said, “We hope that the IAA will respond to the demands of Sisi to renew the religious discourse in Egypt. It will attempt to clear up any misconceptions and teach Egyptian and foreign imams on how to improve the image of religion and refute any ideas that call for extremism and violence.”

Gomaa announced the opening of the world's largest academy for the training of preachers on Aug. 3, 2018. On Oct. 30, he said that he would head a board of trustees at the IAA, consisting of prominent Egyptian scholars, intellectuals and academics in various disciplines. The most prominent of these figures are Grand Mufti of Egypt Shawki Allam, head of Bibliotheca Alexandrina Mustafa el-Faki and former President of Al-Azhar University Ahmad Omar Hashem.

Meanwhile, Al-Azhar University opened Al-Azhar Academy for the training of imams and preachers on Jan. 16, just a few days before the Ministry of Endowments inaugurated its own academy. The objectives of both academies are almost identical, especially with regard to renewing religious discourse and responding to Sisi’s demands in this regard.

Acting Deputy Grand Imam of Al-Azhar Sheikh Saleh Abbas said in his speech during the opening of Al-Azhar Academy that it aims to serve the directives of Sisi to provide preachers with knowledge and train them to confront extremism.

Najjar, who is also a professor of Sharia and law at Al-Azhar University, added, “The IAA is an important step toward renewing the religious discourse with new tools and a balanced scientific approach. There is no duplication between the IAA and Al-Azhar Academy.”

He noted that “if every religious institution launched an academy to train preachers, it is certainly a gain and they would all have complementary roles, especially since Al-Azhar’s scholars are the ones who would train preachers at the IAA.”

Georges Fahmi, a research fellow at the European University Institute in Florence and an expert in religious reform affairs, told Al-Monitor, “Religious reform initiatives in Egypt are somewhat chaotic since there is a lot of conflict of interest and duplication between religious institutions. The proof is that Al-Azhar established a similar academy instead of joining efforts with the Ministry of Endowments.”

Fahmi said, “There is competition over who carries the banner of religious reform in Egypt without any real discussion about the meaning of the reform itself, its objectives and how to achieve it as well as the necessity of renewing religious discourse.”