Egypt's president is reportedly concerned that Al-Azhar's increasing international activity is working to insulate itself from the Egyptian government's control. 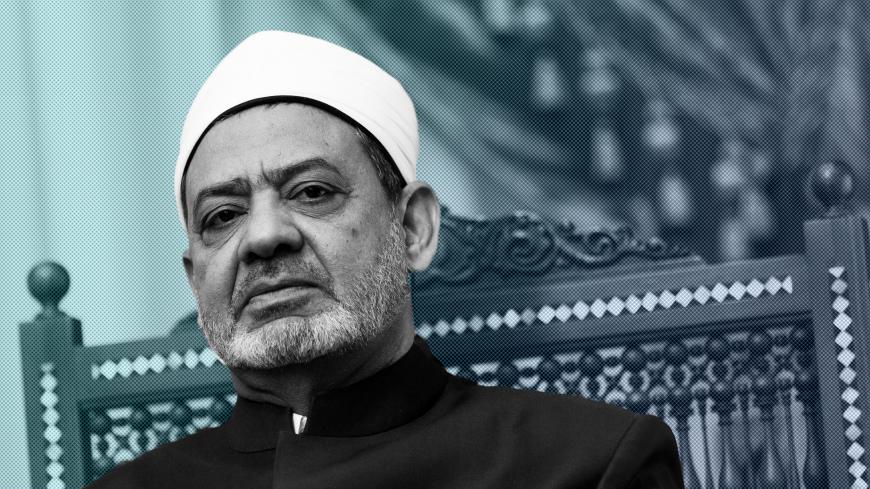 CAIRO — Egypt’s Al-Azhar has had a significant presence abroad in recent years, especially in its efforts to counter the effects of the Islamic State's rise in several countries. The Sunni religious and educational institution has undertaken joint programs to support Islamic countries' fight against extremism and participated in conferences held by international organizations.

All this activity, however, apparently has made President Abdel Fattah al-Sisi a bit suspicious of the motives behind it. He and Al-Azhar's Grand Imam Ahmed el-Tayeb have been known to vie for influence.

On April 2, Al-Azhar International Academy, which Tayeb established last year, began offering courses to train imams and preachers from 20 countries, including Iraq, Afghanistan and Nigeria. On its website, the academy says it shares with participants Al-Azhar's expertise in Islamic studies, "refining their skills and giving them modern experiences and methods that raise their scientific level and help them to deal with intellectual, jurisprudential and doctrinal issues."

In January, the Egyptian Ministry of Endowments (Awqaf) inaugurated the International Awqaf Academy, a training institute distinct from Tayeb's for imams and preachers in 6th of October City with the goal of drawing Egyptian and international figures together to renew Islamic discourse.

There are many branches of Al-Azhar-affiliated associations that work to strengthen its role of spreading moderate Islamic views.

In 2015, Tayeb established the Al-Azhar Observatory for Combating Extremism. Its website offers information in English, French, German, Spanish, Urdu, Swahili and Persian. Through its representatives, the observatory also participates in international forums on Muslim relations with non-Muslims.

Tariq Shaaban, head of the observatory, told Al-Monitor by phone, “We have forged several protocols of cooperation with governments of European countries and international organizations such as the United Nations and the European Union on the issue of terrorist groups and how they manage to attract and mobilize young people. We are also working to pinpoint the reasons behind the growing Islamophobia in Europe."

Shaaban said many collaboration protocols are in place between the observatory and Jordan’s Royal Institute For Inter-Faith Studies.

Commenting on Al-Azhar’s motives for collaborating with international agencies, Shaaban said, “Al-Azhar believes that this role is its national duty amid external circumstances and the noticeable rise of terrorist organizations. This, therefore, requires a greater presence of the most important and oldest Islamic institution to confront these fundamentalist ideas.”

He stressed that international agencies such as the UN and EU and the governments of most African and Arab countries, are keen to consider the views of Al-Azhar in this regard and benefit from its long history and the confidence of millions of Muslims in it.

Hamad al-Safti, a member of the World Organization for Al-Azhar Graduates, told Al-Monitor that the group has been working to establish 10 new branches in addition to the existing 18 branches around the world, which include ones in Chad, Libya and Kenya. The organization is a non-governmental institution headed by Tayeb.

Safti explained that in the past year, the graduates association has organized training courses for imams in Libya, Russia, Nigeria and other African countries. These efforts come within the framework of renewing religious discourse and honing imams' and preachers’ skills to help them rectify misconceptions about Islam. Safti was part of a delegation that visited Russia.

“We have also held debate sessions in coordination with the security authorities in several Arab countries, where people who espouse IS ideologies were invited to share their opinion. The goal was to try to dispel their misconception of Islam and provide them with correct Sharia material,” Safti said.

However, researcher Islam Barakat at the Egyptian Initiative for Personal Rights, an independent think tank, has a different view of Al-Azhar's recent efforts.

“I believe all this action abroad is part of Al-Azhar’s vision of itself as the guardian of Islam around the world and as a partner — rather than an affiliated institution — to the Egyptian state,” Barakat told Al-Monitor. “All these activities abroad immunize the institution to criticism from the Egyptian political authorities or efforts to isolate the grand imam, especially in light of the dispute between Tayeb and Sisi,” he added.

An undisclosed government source told independent Egyptian newspaper Mada Masr, “Sisi is not comfortable with the extent of independence that Al-Azhar is wielding, nor its role abroad. [The] grand imam is acting as though the institution does not operate under the umbrella of the Egyptian government. This is obviously an issue of discomfort for the president.”

In January, Sisi banned Tayeb from traveling on official trips without prior permission. But Barakat told Al-Monitor he doesn't expect Al-Azhar to slow down in its activities regardless of the restrictions.