Egypt seeks more influence in Mali through Al-Azhar, which is organizing a training program for a number of Malian imams in a bid to counter extremism. 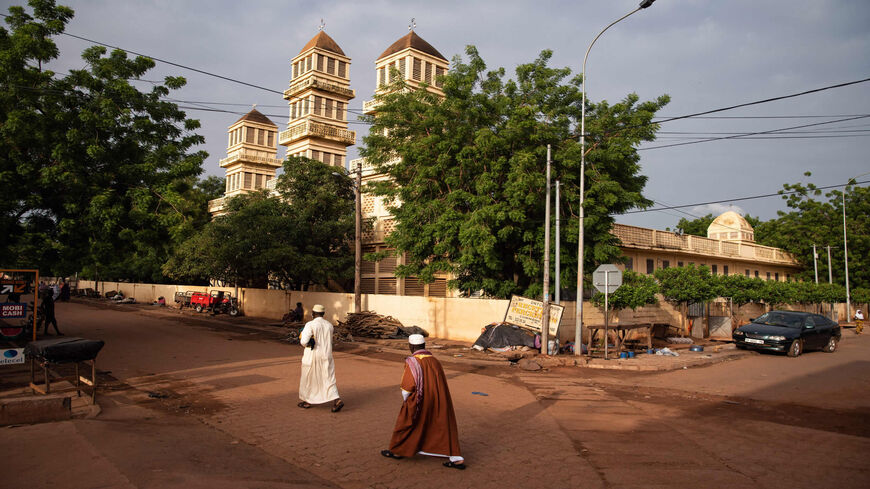 Muslim worshippers head to prayer in the Badalabougou neighborhood of Bamako during the Muslim holiday of Eid al-Adha, Mali, July 20, 2021. - Nicolas Remene/AFP via Getty Images

As Egypt steps up its efforts to boost its influence in the African continent, Al-Azhar announced Aug. 2 a training course for 23 imams and preachers from Mali to fight radicalism.

Hassan al-Saghir, chairman of Al-Azhar International Academy said in a statement, “The goal behind the training course is to enable Malian imams to correct the misconceptions and wrong ideas about Islam and to counter extremism.”

Mamadou Mangara, Mali’s ambassador to Cairo, said in a statement that his “country hopes that the trained imams can confront the ideas promoted by extremists.”

Al-Azhar has a strong presence in Mali. In a meeting with Mali’s Prime Minister Moussa Mara back in 2014, Al-Azhar Grand Imam Sheikh Ahmed el-Tayeb announced “the deployment of sheikhs and professors from Al-Azhar to work in Mali’s education sector so as to instill the values ​​of peace and moderation in the students’ hearts.”

Al-Azhar has also set up a branch of the World Association for Al-Azhar Graduates in Mali. The media center of Al-Azhar said in a statement in February 2019 that through its branches and programs in Mali and other African countries, the association aims to optimize Al-Azhar’s soft power via its graduates.

In March this year, Al-Azhar’s association and mission in Mali organized a religious conference dubbed “Moderation in Islam,” in one of Mali’s mosques, during which discussion was centered on the danger of extremism and fundamentalism and on the importance of instilling the values ​​of peace and peaceful coexistence in the community.

In cooperation with the World Association for Al-Azhar Graduates in Mali, the Al-Azhar mission, which consists of a number of Egyptian preachers in Mali, is keen to hold activities and seminars to battle extremism and spread moderate narratives.

During his visit to Cairo in May, Malian Foreign Minister Zeini Moulaye praised Al-Azhar’s role in promoting cultural ties between Egypt and Mali by spreading the tolerant teachings of Islam and countering extremist ideas. During a meeting with Moulaye, Egyptian Foreign Minister Sameh Shoukry stressed “the Egyptian role in countering terrorism and extremism through Al-Azhar by communicating the correct concepts of Islam in Mali.”

Al-Azhar’s role in Mali is not limited to advocacy, but also includes humanitarian aid. On Aug. 10, the World Association for Al-Azhar Graduates in Mali organized a series of charity activities focusing on the displaced people who were forced to flee their houses in northern Mali due to terrorist attacks. The association offered humanitarian aid in an attempt to ease the people’s suffering.

Moreover, Al-Azhar supports the Malian army in fighting extremist groups. In May 2020, the association praised the Malian army’s efforts in combating terrorist organizations, and stressed that these groups have nothing to do with Islam and have no respect or consideration neither to believers nor to any human soul and individual or public property.

The Egyptian efforts to boost its presence in Mali are not limited to Al-Azhar’s role, as bilateral relations also expand to diplomatic visits. During his May visit to Cairo, Moulaye met with Egyptian President Abdel Fattah al-Sisi who voiced Egypt’s keenness to help restore stability in Mali.

Sisi noted that Egypt is ready to cooperate with Mali in countering terrorism and extremism, and to jointly coordinate at the security and military levels.

At the economic level, bilateral trade between the two countries has been growing in the past years. A 2020 report issued by The Administration of African Countries and Organizations and the Common Market for Eastern and Southern Africa (COMESA) unit at the Trade Representation Authority indicated that trading volume between Egypt and Mali increased to $12.1 million in 2018, compared with $10.8 million in 2017.

The Egyptian efforts in the West African country comes as Turkish influence in Mali is growing. France’s Le Monde wrote Aug. 5 that Turkish Foreign Minister Mevlut Cavusoglu was the first foreign official to visit Mali since the 2020 coup in September last year.

“This visit is a sign pointing at Turkey’s support for the coup d’etat, which, itself, is an attack on the French interests,” Le Monde continued.

Sweden’s Nordic Monitor reported in a September 2020 report that “Cavusoglu visited Mali with the goal of installing a transitional phase in line with his government’s policies.”

On Aug. 18, 2020, a group of soldiers led a military coup in Mali, ousting President Ibrahim Boubacar Keita who was forced to resign and dissolve parliament and the government.

Although the Turkish goals in Mali have historically conflicted with the French influence there, the Egyptian efforts do not contradict with France’s interests in Mali, as revealed in a study by the Egyptian Center for Strategic Studies. The study, released in December 2020, found that there is significant convergence between the Egyptian and French visions to combat terrorism in the Sahel and Sahara region, including in Mali, and eliminating terrorism by countering radical ideas.

Tarek Fahmy, a professor of political sciences at Cairo University and a lecturer at the Malian Imams training program, told Al-Monitor, “Al-Azhar has a significant presence in Mali, and the training course is founded on educating imams and preachers and introducing moderate thought.”

Fahmy noted, “Egypt has resorted to Al-Azhar to consolidate its presence in Mali, which France may benefit from in light of the spread of radical groups in the African country. Hence, communicating a moderate ideology in the country is a French desire, and can only be done through a time-honored Egyptian institution, such as Al-Azhar.”

He concluded, “Turkey is trying to boost its present in Mali through loans and humanitarian aid, which Egypt is well aware of, which is why it is seeking to consolidate its role in Mali and in the Sahara and Sahel region.”