Does France’s failure in Mali spell a victory for Turkey?

Although claims regarding Turkish involvement in the Malian coup seem far-fetched, one can still see a conflict of interest between France and Turkey over Mali. 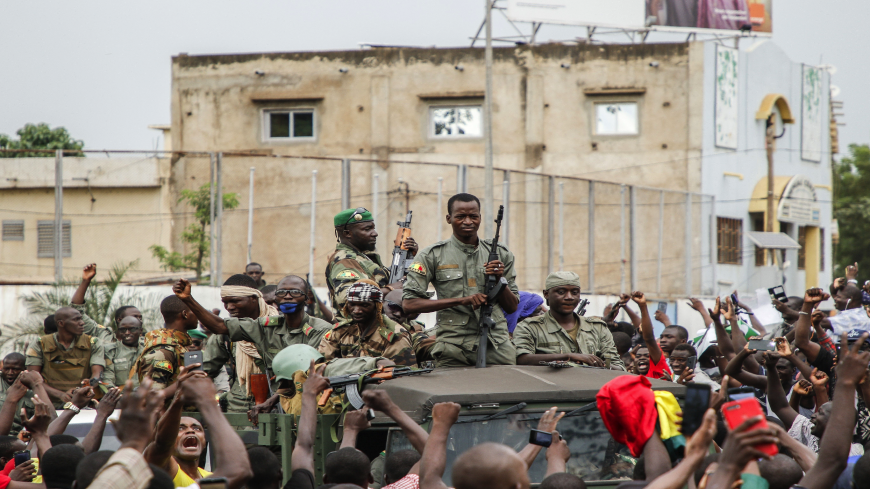 Armed members of the FAMA (Malian Armed Forces) are celebrated by the population as they parade at Independence Square in Bamako on Aug. 18, 2020, after rebel troops seized Malian President Ibrahim Boubacar Keita and Prime Minister Boubou Cisse in a dramatic escalation of a monthslong crisis. - STRINGER/AFP via Getty Images

Turkey’s swift outreach to the coup makers in Mali has fueled questions as to whether the ongoing rivalry between Turkey and France played a role in the Malian military coup that ousted the country’s embattled president in August.

Paying a visit to the former French colony on Sept. 10 before the dust of the Aug. 18 coup settled, Turkish Foreign Minister Mevlut Cavusoglu met with the members of the National Committee for the Salvation of the People set up by the putschists.

Protests that paved the way for the coup that deposed President Ibrahim Boubacar Keita and Prime Minister Boubou Cisse escalated after the controversial elections held last spring. Guided by Mahmoud Dicko, an influential imam, the Malian opposition groups joined forces and planned a massive rally to overthrow the government on Aug. 19. Yet acting early, the military junta seized power a day before the critical protest.

Regardless of their support for Turkey or opposition to France, the Malian people have had plenty of reasons to take to the streets, including ill governance, nepotism, corruption, poverty and mishandling of the coronavirus pandemic. The country has been struck with violence, with the northern provinces including Kindal, Gao and Timbuktu falling into control of separatists and turning to jihadi enclaves. The public distrust has grown further as the government failed to contain the insurgency. The country’s UN-sponsored war on terror that costs some $1 billion annually has failed, enabling violence to extend to the capital, Bamako. The reconciliation talks between the country’s Tuareg-led rebels and the government have also collapsed.

Malian opposition leader Soumaila Cisse was kidnapped ahead of the controversial elections in which the turnout rate remained at 35%. The country’s highest court announced the victory of 31 candidates who had reportedly lost the elections. Opposition groups joined forces under a united front to challenge the government.

Many Malians — including Dicko, who had previously supported France’s military interventions against the Islamists who seized control of the north — turned against Paris, blaming it for the deepening crisis in the country. Dicko accused France of trying to exploit the country's war against jihadists to recolonize the Western African nation, with many Malians considering Keita “France’s man in Bamako.” Dicko also believed that Cisse had been under the protection of Paris.

Yet Dicko’s hostility toward France doesn’t necessarily mean he is pro-Turkey, especially given his educational background in Saudi Arabia. Hailing from southeastern province of Timbuktu, the heart of African Sufism, the cleric studied religion at Islamic University of Madinah in Saudi Arabia. Despite his Wahhabi foundations, Dicko is positioning his religious position as a blend of the Malian national culture, traditional values and Sufism. Still, Paris considers him a Wahhabi who is in dialogue with jihadists.

Turkey has been drawn into the allegations surrounding the Malian coup through Dicko’s ties with Turkey. Dicko had reportedly helped Ankara to secure land in Bamako for a Turkish-sponsored mosque. The cleric has also had ties with Turkey’s Islamic National Outlook movement, from which Turkish President Recep Tayyip Erdogan hailed. Yet such nonorganizational ties between Islamic groups are not unusual, and the movement has had similar ties with other Islamist movements across the world. Thus, regarding these ties as an indication of possible Turkish involvement in the Malian coup seems far-fetched.

Furthermore, although arguing Mali’s historical ties with France have prevented Turkey from deepening its ties with the Western African nation as much as Ankara wants, Erdogan used to maintain good relations with Keita. Turkey opened its embassy to Mali in the capital Bamako in 2010. Erdogan paid his first trip to the country in 2018. Yet despite its efforts, Turkey has failed to gain enough influence within the Malian establishment and civic society to change the course of events, holding much less influence than France.

Moreover, there are no apparent ties between the Malian military coup leaders and Turkey. The leader of the junta, Col. Assimi Goita, received training from the Pentagon, Germany and France. When Goita had been kidnapped by militants in 2012, Dicko had been helpful in his release. Goita is reportedly one of Dicko’s proteges. Meanwhile, two other junta leaders, Sadio Camara and Malick Diaw, have reportedly strong ties with Russia. Camara is said to have taken a break from his training in Russia and returned back to his country just 15 days before the coup. Diaw also received training in Russia. Thus, some see Russian fingerprints in the coup. Retired Gen. Fanta Mady Dembele, who supported the coup, is said to have ties with Germany.

Turkey, in turn, doesn’t hold any sway over the country’s military, with its contribution to the country’s security limited to only two police officers. The number of UN peacekeepers in Mali is around 13,000, in addition to 5,100 soldiers dispatched by France.

However, one can still see a conflict of interest between France and Turkey over Mali. Erdogan has snapped at French colonialism in many of his speeches about Africa. In an interview last September, he lashed out at French President Emmanuel Macron for visiting Mali. “What business do you have in there?” he said, noting that 95% of the Malian population is Muslim.

The pro-AKP media, for its part, has spotlighted the large support of the coup and their criticism of ECOWAS — a regional economic alliance — for shutting their borders and suspending their trade ties with Mali. France’s condemnation of the coup and its call on the UN Security Council for an emergency meeting are fueling the claims that the riots and the coup have carried anti-French sentiments.

France had been the first country to reach out to the military leaders in Mali after the 2012 military coup. This time, it was Turkey. This may have two different explanations: Ankara views Malian actors opposing France as allies, or it simply doesn’t want to miss the opportunity to establish ties with the prospective Malian leaders.

Mali’s natural resources, including gold, copper, nickel, phosphate, manganese, uranium and lithium mines, are increasing the appetite of Turkey. Trade between the two countries, the worth of which has increased to $57 million from $5 million in 2003, is still below the desired level. Turkey is aiming to boost economic and political ties through humanitarian endeavors and active diplomacy.

Meanwhile, Cavusoglu’s meeting with the junta leaders can be seen as the legitimization of the military coup. During his visit, Cavusoglu stopped short of publicly reiterating Turkey’s “deep concerns,” which were expressed by the Turkish Foreign Ministry in the immediate aftermath of the coup. After his meeting with Goita, the Turkish minister said Turkey would help the Malian people return to civilian and constitutional order.

France’s responsibility in Mali’s descent into unrest might be creating a power vacuum, which Turkey is eager to fill. However, failed French policies that ignored the country's other problems for the sake of the war on terror for the past eight years do not secure Turkey’s success. Moreover, France would not risk its stakes in Mali and Sahel region. Indeed, the French ambassador’s meeting with the Malian military leaders only six days after the coup and the French Foreign Ministry’s statement expressing support for the Malian people indicate that Paris has already adjusted itself to the new situation in Mali without panicking much.