Based on recommendations by Egyptian President Abdel Fattah al-Sisi, Al-Azhar University in Cairo is taking steps toward updating the religious discourse it teaches to its students through revising curricula and minimizing references to distorted concepts of jihad and extremism. 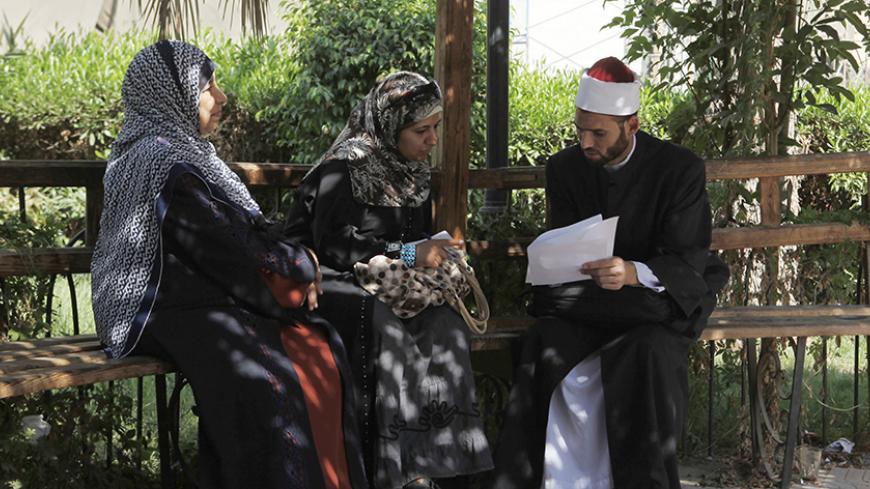 An Al-Azhar sheikh explains some papers in the courtyard of the Al-Azhar administrative building, in Cairo, Sept. 10, 2012. - REUTERS/Asmaa Waguih

The process starts with reviewing Al-Azhar’s curricula. Sisi had recommended in July 2014 that concepts of militancy be removed from Al-Azhar curricula and a number of religious books be confiscated, besides setting up advocacy groups targeting youth centers to confront the ideas of extremist groups. Azab is still fighting to strike lessons on slavery and jizya tax (the required per capita tax on non-Muslims under Islamic law) from textbooks. Jizya tax is being used by the Islamic State (IS) and other extremists to rob the people’s money. Azab said that Al-Azhar has nothing to do with spawning IS members who follow erroneous concepts of jihad, while the latter was historically legitimized in Islam to fend off attacks and not to be an act of hostility and aggression.

Azab, formerly the dean of the faculty of Sharia and law, ascended to school head last October, becoming the 13th president of the institution since its founding in 1961.

Al-Monitor:  Egyptian President Abdel Fattah al-Sisi tasked Al-Azhar with updating the religious discourse. What is the role of Al-Azhar University [in this regard]?

Azab:  The announcement made by President Sisi drew the attention of Al-Azhar, and we started implementing this objective immediately as a religious, social and cultural duty. Indeed, Al-Azhar institution has the tools to update the religious discourse through Al-Azhar University, one of the oldest and most prestigious universities in the world, with a [capacity to accommodate] about 450,000 students from various nationalities. Moreover, Al-Azhar institutes are spread across Egypt, and we have already started reviewing the curriculum and university books. We also launched advocacy groups across Egypt aiming to correct misconceptions. The advocacy campaign includes [establishing] youth centers in villages and remote areas to reach out to the largest group of young people, especially those who do not go to the mosque to listen to Al-Azhar’s sheikhs give the Friday sermons, which became one of the most important tools for spreading Islamic moderation and rectifying religious ideologies. We are targeting young people to prevent them from falling prey to the ideas of extremist groups. We are also currently working on a plan to develop all Al-Azhar curricula to provide easy courses combining the past and present and to include in lessons and lectures topics focusing on correct Islamic concepts to keep the students from following those seeking to recruit them to serve the purposes of terrorism and militancy.

Al-Monitor:  What are the results of this comprehensive review of Al-Azhar curricula, especially in lights of accusations that these curricula spread religious extremism and represent a reference for ideological extremism groups, particularly IS?

Azab:  Accusing Al-Azhar of breeding IS is an act of calumny and IS has nothing to do with breeding IS and other groups emerging under false jihad concepts and alleging that this is the true Islam. Jihad in Islam aims to fend off attacks and was not legitimized for acts of hostility and aggression. The question here is for all those who offended Al-Azhar by leveling this accusation. Is IS affiliated to Al-Azhar? No. It is rather a fabrication hostile to the Islamic nation, the Arab world, and the whole world. I would like to tell Turkey in particular to be well aware since terrorism has neither religion nor homeland. I say to the United States and Europe that if they want security for Israel and for Europe, we will provide security to the People of the Book [adherents of Abrahamic religions] and they have to deter those extremist groups.

With regard to the results of our review of Al-Azhar curricula, a number of books were confiscated while preserving the essence of Al-Azhar curricula. We undertake the teaching of values consecrating human moral righteousness. These few people [staff and faculty members] who are defaming Al-Azhar were let go. We also excluded all persons having militant and provocative or fanatic thoughts by dismissing 15 members of the teaching faculty. This was not out of confiscation of thoughts, but it is the right of Al-Azhar to intervene in what affects its prestigious mission, which it seeks to spread across the world. Updates also included graduation theses. Among the master’s and doctoral theses we examined only five included concepts advocating extremism and hostility to the world, and those had to be excluded.

Al-Monitor:  Did the university have a dialogue with the students affiliated to the Muslim Brotherhood to persuade them to refrain from organizing protests under the banner of Rabia Square?

Azab:  We have succeeded in facing this hostile line of thought by the students through student guidance campaigns aimed to face the violent demonstrations that the Brotherhood were orchestrating. To the Brotherhood I say: You must know that it is better in Islam to raise intellect than to raise armies. Regarding the Rabia Square, it is a slogan hostile to nations and fabricated to undermine the intellect.

Al-Monitor:  In April 2015, you stressed the need to remove the subjects of slavery and jizya tax from Al-Azhar curricula. This was described by some Al-Azhar sheikhs, including Khalid al-Jundi, as an abandonment of the fundamentals of religion, since you are removing concepts mentioned in the Holy Quran.

Azab:  I said that not all what is included in the Quran is currently applied on the ground. For example, the Quran spoke about slavery, and according to the doctrine, it is advisable and desirable to seek to free a slave from slavery, but IS and other extremist groups are demanding teaching the concept of slavery and to reapply it. This is why I demanded to make the curriculum immune to these matters, which are no longer in harmony with the current era. We do not make room for such subjects in the curricula and it is better to set priorities in accordance with what serves contemporary causes. There are also concepts regarding the jizya tax, which used to be a source of state income in Islam, but this source is no longer applied and there is no reason to keep reiterating this in our lessons.

Al-Monitor:  Turkey is upholding its opinion that an alternative religious university that would attract Muslim students from various countries [should be established], by arguing that Al-Azhar’s performance is declining and that it is failing to rectify the image of Islam. What is your take on this issue?

Azab:  Even if great buildings were constructed, they would not be able to simply buy a history such as that of Al-Azhar and its university, which currently teaches 70,000 expatriates from various countries around the world. It is known that Turkey’s role is based on racist Ottoman concepts and has a desire for new invasions but at an intellectual level; while Al-Azhar’s objective is not based on racism, but rather on the concepts of moderation and peaceful coexistence and the elevation of humanity.

Al-Monitor:  How does Al-Azhar deal with other Islamic sects such as Shiite and Ibadi ideologies?

Azab:  Although Al-Azhar embraces a moderate line of thought, it brings up its students to have opinions and respect others’ opinions. A student of Al-Azhar studies the doctrines of all religious sects, including the Ibadi sect. Al-Azhar also embraces the Shiite ideology in its Imamism or Zaidism branches. It does not show hostility to any particular ideology. We ask our students to live under the wing of Al-Azhar, away from fanaticism and racism and by [inviting them to] adopt the right concepts.