The decision to concede sovereignty of islands was poorly received by the Egyptian public. 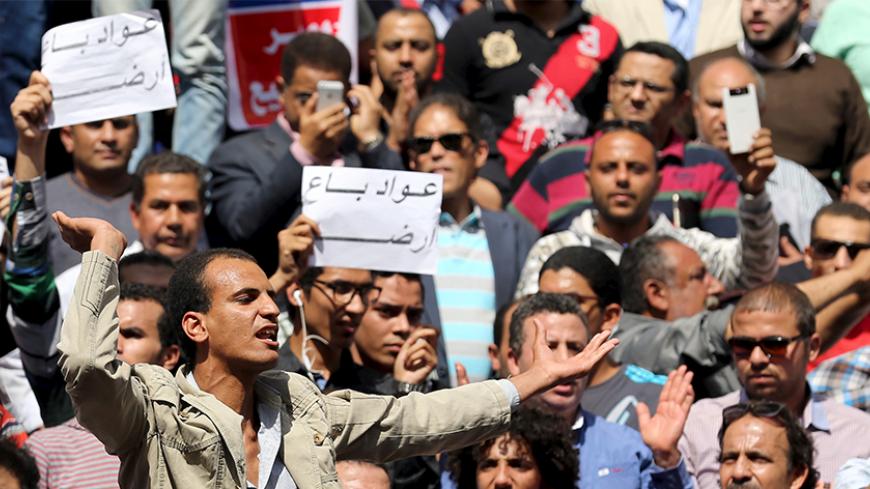 Egyptian activists shout slogans against President Abdel Fattah al-Sisi and his government during a demonstration protesting the decision to transfer two Red Sea islands to Saudi Arabia, in front of the Press Syndicate in Cairo, April 15, 2016. - REUTERS/Mohamed Abd El Ghany

On April 4, Egypt signed a maritime border agreement with Saudi Arabia in the presence of Egyptian President Abdel Fattah al-Sisi and Saudi King Salman bin Abdul-Aziz Al Saud. Six days later, the Egyptian Council of Ministers announced that the islands of Tiran and Sanafir, both located in the Red Sea, were Saudi territory based on surveys by the National Committee for Egyptian Maritime Border Demarcation and on 11 rounds of meetings held between the two sides over several months. The committee had worked for six years; a number of Egyptian politicians criticized the agreement. Former presidential candidate Hamdeen Sabahi called on Sisi and Salman to withdraw the agreement and consider it null and void. He denounced Saudi Arabia for putting itself in a suspicious position for exploiting Egypt's need, saying, "It is not worthy for Egypt to appear as complying because of need.”

Human rights lawyer Khaled Ali announced April 10 that he filed a lawsuit against what he described as "conceding" the islands of Tiran and Sanafir. He called for turning the popular anger into a demand for putting up the agreement to a referendum according to the Egyptian Constitution.

In the same vein, the head of the Strong Egypt Party and former presidential candidate Abdel Moneim Aboul Fotouh wrote in an April 9 tweet that the agreement threatens Egyptian national security and that the “Zionists” are the only beneficiaries.

The Egyptian government's decision to consider the two islands Saudi territory caused a stir on social media. Satirist Bassem Youssef, who led the criticism on social media, called the decision a "sale" and the Egyptian president “cheap.” He likened Sisi to Awad, a proverbial Egyptian farmer who sold his land to eat. He also said that the president’s legitimacy has been lost.

In the media, there was a lot of confusion and tumult between the agreement’s supporters and opponents. Then a former Egyptian armed forces commander poured oil on the fire. In a televised interview April 9, Maj. Gen. Abdel Moneim Said, the former operations chief of the armed forces and former governor of South Sinai, said that the islands were Egyptian.

Said pointed out that he worked on the island of Tiran in 1955 and that Egypt has two border demarcation points there, stressing that Tiran is only 8 kilometers (5 miles) away from Egyptian territory. But within 24 hours, Said withdrew his comments in a phone call with another Egyptian channel and stated that the two islands were Saudi.

On the other hand, official newspaper Al-Ahram refrained from publishing an article by the head of its board of directors Ahmed El-Naggar, who opposed the agreement on the two islands. So instead, Naggar published his article on Facebook April 17.

On April 13, Sisi met with a number of groups in a meeting attended by the intelligence chief, the defense minister, heads of parliamentary bodies and heads of professional associations. Sisi said that Egypt did not concede any territory but simply gave Saudi Arabia what rightfully belonged to it and asked the people to stop talking about this issue.

Sisi said he was happy to see the Egyptians care so much about their land, but that this caring must be pointed in the right direction and that the mass distrust, including against the state apparatus, must stop.

The president revealed that, before the agreement was made, he wanted the matter to remain under wraps in order to prevent stirring public opinion in Egypt and Saudi Arabia.

In a related development, Israeli newspaper Haaretz reported April 11 that Cairo had informed Tel Aviv in advance of its intention to waive its rights to the two islands, which are in the Gulf of Aqaba, to Saudi Arabia. The newspaper reported that during recent Egyptian-Israeli talks, Tel Aviv informed Cairo that it would not oppose handing over the islands to Saudi Arabia as long as Israeli ships can continue to navigate in the region.

On April 15, the criticism on social media moved to the streets. Cairo and several Egyptian provinces witnessed demonstrations by thousands of Egyptians from various political parties protesting the decision. The demonstrators called on overthrowing the regime and chanted slogans against Sisi, such as "The people want to overthrow the regime," "Just go" and "Awad sold his land." The demonstrations were called for by political figures and opposition forces, including the Muslim Brotherhood, and were held under the slogan "Land is Honor.”

In a statement obtained by Al-Monitor, the Egyptian Interior Ministry warned against what it called attempts to lawlessness, in reference to the protests. The security forces arrested a large number of demonstrators. At first, the general prosecutor decided to release them, but then he changed position and ordered them jailed until National Security completes its investigation. The defendants are being charged with demonstrating without notice, disrupting public transportation, blocking roads and threatening security and public order.

In a related event, the US-based global intelligence company Stratfor published a report in which the Egyptian Supreme Council of the Armed Forces warned about conceding the islands of Tiran and Sanafir to Saudi Arabia. According to Stratfor’s sources, the council advised Sisi to refrain from transferring sovereignty over the two islands to Saudi Arabia because it would hurt national pride and upset Egyptian public opinion given that the agreement’s timing and its coinciding with the announcement of Saudi investments would make the sovereignty transfer to look like a sale.

Some had called for mass demonstrations on April 25 — the anniversary of the Sinai Peninsula’s liberation — in an attempt to block the sovereignty transfer, yet a large-scale security crackdown led to a limited turnout. In the same regard, during a speech commemorating the 34th anniversary of Sinai’s liberation, Egyptian Defense Minister Sidqi Subhi called on the Egyptian people to unite their voices in order to uphold the nation’s interests, stressing that the armed forces will not tolerate those who try to spread chaos in the streets and will not be blackmailed or pressured.