How Cairo was able to stop April 25 protests

Although mass protests had been planned following Egyptian popular anger at an agreement to cede the Red Sea islands of Tiran and Sanafir to Saudi Arabia, efforts by the security forces seem to have thwarted major demonstrations. 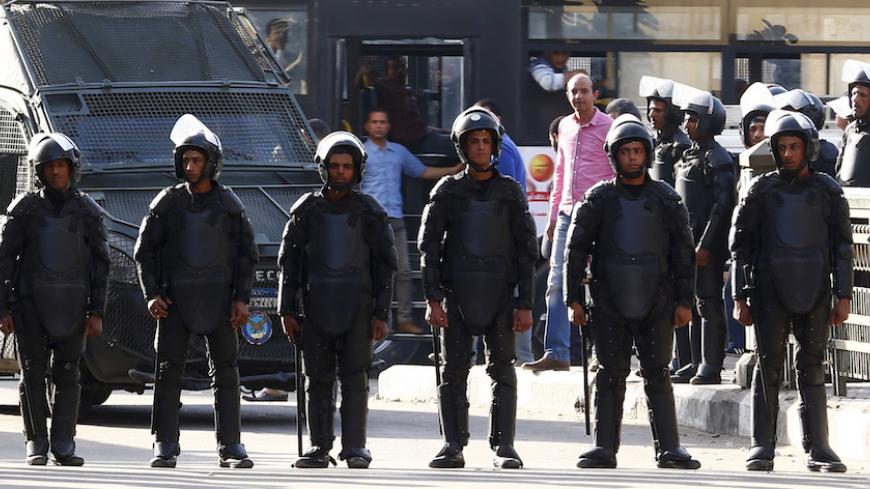 People look on from a bus behind riot police after security forces closed streets during a demonstration protesting the government's decision to transfer two Red Sea islands to Saudi Arabia, in front of the Press Syndicate in Cairo, Egypt, April 15, 2016. - REUTERS/Amr Abdallah Dalsh

CAIRO — The Egyptian security forces began an intense arrest campaign the evening of April 21 aimed at nipping in the bud the second wave of popular protests against the Egyptian government's ceding the islands of Tiran and Sanafir to Saudi Arabia.

On April 25, 16 human rights organizations — most notably the Egyptian Initiative for Personal Rights and the Cairo Institute for Human Rights — issued a statement denouncing the arrest campaign, stressing that police had arrested at least 100 people in eight provinces. The statement described the arrest campaign as an attempt to intimidate and thwart the protests planned for April 25.

In the same context, the Egyptian presidential office denied a story published in Al-Shorouk newspaper April 20 about a meeting where President Abdel Fattah al-Sisi said that he would not accept a repetition of the Land Friday demonstrations that took place April 15. During a speech commemorating the 34th anniversary of the Sinai Peninsula’s liberation, Sisi vowed to confront any attempt to break the law or compromise state institutions.

On April 25, upon touring the streets and squares of Cairo and Giza, Al-Monitor noted that a large number of police officers dressed in both civilian attire and official uniforms had sealed off the journalists' union headquarters and stepped up their presence in Tahrir Street in Dokki and in areas where the Egypt is Not for Sale campaign said that protests would be held. Police seemed ready to confront anyone they suspected of intending to protest.

“The intense state security alert led us to change the gathering’s location,” political activist Mustafa Raghib told Al-Monitor. He said that he and others were planning to converge at the Bohoos area on Tahrir Street, following a protest map, but that the heavy security presence forced them to move their gathering to the nearby Nahia area. However, security forces then used tear gas and buckshot to disperse dozens of protesters a few minutes after they gathered.

The Egyptian Interior Ministry announced in a statement issued on the evening of April 24 that it will “respond with the utmost firmness and decisiveness to any action that could disturb public security. Any attempt to harm vital or important installations or any police installations or facilities will be forcefully dealt with.”

Raghib stressed that he decided to protest despite the extensive arrest campaign, which had an impact on his colleagues before and during the protests. He stressed that street actions and continuous protests are the best way to send a message to the regime that there is opposition to its policies in the Egyptian street, similar to what happened when thousands of people demonstrated on Land Friday April 15.

The security services only allowed government supporters to be present in the streets such as at Tahrir Square and around the journalists' union. Government supporters went to the streets to commemorate Sinai’s liberation. They waved the Saudi Arabian flag and expressed their support for the decision by the Egyptian administration to cede the islands of Tiran and Sanafir to Saudi Arabia.

Raghed added, “Since when do Egyptians celebrate Sinai’s liberation in the streets? … I have no reason to doubt that those who gathered [for Sinai] were directed by certain pro-government forces.”

Ahmed Hussein, a university student in his 20s, told Al-Monitor that before going to demonstrate he learned that the security forces had closed off access points to the protest location and that there was a protest gathering at Masaha Square in Dokki.

“We aimed for about 500 protesters in Masaha Square,” said Hussein. He said the protesters, despite knowing that the security forces had surrounded the square, gathered and chanted “Bread … Freedom … These islands are Egyptian” (a variation of the common refrain from the January 25 Revolution “Bread … Freedom … Social Justice) and “The people want to overthrow the regime,” but then the security forces entered the square and broke up the gathering with tear gas.

Hussein said that he used one of the streets leading to the square to evade security forces and their helpers, whom he described as “thugs.” He said the security forces were able to detain dozens of protesters and trap more than 100 at Dignity Party headquarters overlooking the square. The security forces ended the siege after a number of political figures, most notably leftist leader George Isaac, intervened.

The Egyptian Interior Ministry announced that 270 protesters were detained in the governorates of Cairo and Giza on April 25. The Egyptian Demonstrators Defense Front published a list of 239 protesters detained, which included journalists, activists and members of political parties.

A young journalist named Assem Mohammed was detained twice by the security forces. The first was at the Great Sea Street in Giza on the eve of the protest, and the second was at Ramses Square in central Cairo the afternoon of April 25.

Assem told Al-Monitor that he was beaten the first time despite his showing the detaining officers his journalist identity card. They searched his mobile phone and checked what he published on his personal Facebook account before being released, he said.

When they detained Assem the second time, he was taken to a prison bus. He noted that they checked his criminal record and confiscated his mobile phone, but a major in the national security agency cleared him. Assem was given back his identity card and phone after his journalist colleagues intervened.

The security forces of Cairo governorate announced the arrest of 15 people in the vicinity of Ramses Square after searching their mobile phones. A security source told Al-Shorouk newspaper April 25 that WhatsApp messages showed that the detainees were trying to mobilize protesters.

According to Article 57 of the Egyptian Constitution, personal privacy is protected and inviolable for paper and electronic messages, telephone conversations and other communications. They cannot be confiscated or examined except by judicial order and only for a definite period.

Gamal Eid, the head of the Arabic Network for Human Rights Information, told Al-Monitor that more than 400 people had been arrested from April 21 until the evening of April 26, stressing that efforts by human rights lawyers resulted in the release of around 150 detainees, with more than 240 still being held.

The human rights lawyers claimed they were harassed while trying to get the detainees released.

Eid said the April 25 protests achieved their goal of sending a message to the government that peaceful civil opposition is still present and influential despite the government’s attempts to undermine it by tightening its security grip.

Eid confirmed that lawyers and human rights activists have found that pro-government demonstrations were organized by forces affiliated with the government as evidenced by the meals that were distributed to the participants. He pointed out that the state has lost a lot of its popularity and is now resorting to paid supporters.