An Egyptian construction contractor's viral videos call for an uprising in Egypt, alleging corruption among the military and authorities. 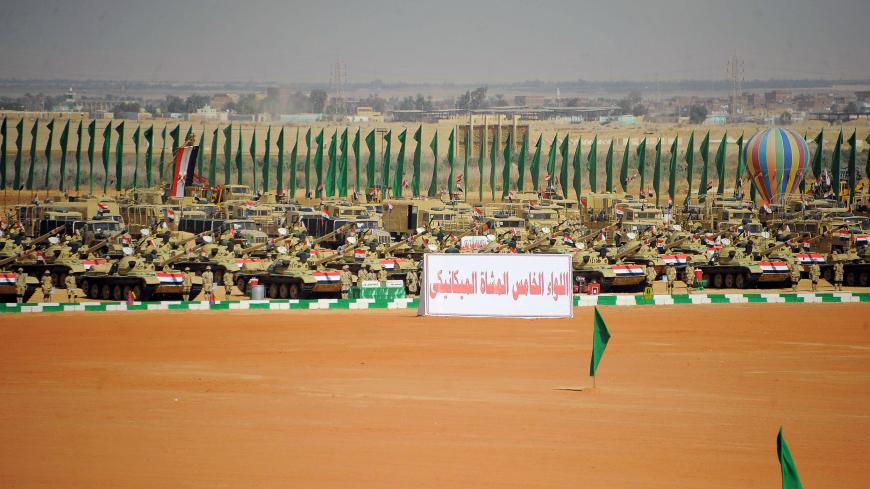 A general view by Egypt's army during a presentation of combat efficiency and equipment in Third Field Army in Suez, Egypt, Oct. 29, 2017. - The Egyptian Presidency/Handout via REUTERS

In videos posted to Twitter and Facebook, Mohamed Ali, an Egyptian construction contractor, accused the Egyptian president and military of corruption. Speaking from self-imposed exile in Barcelona, Spain, Ali said the military owes him hundreds of millions of Egyptian pounds for projects carried out by his company, Amlaak Group, including construction of a new presidential palace worth 250 million Egyptian pounds and a luxury hotel for a senior military general worth 2 billion pounds.

Though Ali did not provide evidence to back up his claims, he has nevertheless created widespread controversy in Egypt and attracted 120,000 followers to his Twitter account, @MohamedSecrets, over the last two weeks.

"You are throwing away billions while your men are wasting millions," Ali said of Sisi, without naming him, in the first video he released Sept. 2.

Nervana Mahmoud, a medical doctor and commentator, described Ali's campaign as an “orchestrated dirty media campaign” against the authorities and the army. Revolutionary activists like the former Google executive Wael Ghonim and blogger Wael Abbas, meanwhile, slammed Ali for "addressing Egyptians from outside the country."

Ghonim, who administered the "We are all Khaled Saeed" Facebook page, which is widely believed to have ignited the revolt against Hosni Mubarak, broke his six-year silence with a series of online videos accusing Ali, a novice actor, of speaking out for "personal gain."

"Mohamed Ali, shame on you! Stop it," he said. "You are doing this for the money!"

Egypt's pro-government media attacked Ali, with talk show hosts calling him a "womanizer" and "foreign agent." Ali's father, former government insider Ali Abdel Khaleq, appeared on Egyptian TV saying he was shocked by his son's actions. He denied that the military owed Ali any money and said his son had reaped vast profits from his army projects.

Sisi also denied Ali's statements, calling them "lies" and "fabrications." He acknowledged that he had indeed built presidential palaces and would continue to do so. "Yes, I have built palaces," Sisi said during a live broadcast on Egyptian state TV. "Did you think you would frighten me with your criticism? I shall continue to build more palaces. Those aren't for me. Nothing is for me … they are for Egypt."

"The aim [of the videos] is to break the will of Egyptians," Sisi said, without mentioning Ali by name. "Those who make these videos aim at shaking stability in the country and the trust between me and the Egyptian people." Sisi said that he was responding to the videos against the advice of the intelligence services.

Ali responded with a new video, stating, “See, I wasn't lying. He himself has confirmed the fact that presidential palaces are being built. He is building them to satisfy his ego. This, while many people sleep in the streets without a roof over their heads." Addressing Sisi, he said, "Enough! I will trigger an uprising against you."

Ali urged Egyptians to take to the streets to demand that Sisi step down, assuring them that "together we can bring down the dictator." In another video, he called on Egyptians to start by demonstrating outside their homes for one hour at 7 p.m. on Sept. 20. "We must take photographs of our peaceful rallies and post them on social media to show the world the large number of Sisi opponents," he said.

He further exhorted the defense minister to stand by the Egyptian people and arrest Sisi. Within hours after Ali posted the videos to Twitter, the Arabic hashtag #Enough_Sisi was shared more than 1.5 million times, becoming the No. 1 trending tag on social media in Egypt. Some activists shared pictures of the January 25 Revolution and tweeted, "We will be back on the streets tomorrow!" Others suggested that the protests be held at noon on Friday, when worshippers gather for weekly prayers. Fearing reprisals from security forces, a few activists called for civil disobedience instead of street protests.  Various Egyptian cities did see protests Friday evening, but it is yet to be seen whether they will materialize into large demonstrations.

Ali's claims prompted other Sisi opponents to post videos critical of the government's policies online. In a scathing attack on Sisi, Mosaad Abu El Fagr, an activist in Sinai and a member of the Committee of Fifty, which drafted the 2014 constitution, said that though terrorism exists in Sinai, the number of terrorists affiliated with the Islamic State does not exceed 1,000.

"Why has it taken so long to rid the Sinai Peninsula of the terrorists?" he asked in a Sept. 16 video. "And why is the army refusing the help of Sinai residents [who know the area well] to hunt down and root out the jihadis?"

He continued, "It is in the regime's interests to prolong the war and evacuate Sinai residents who believe they themselves are the targets of the war. Sisi is raising the specter of war to keep Egyptians living in fear and to ensure that financial support from allies for the war on terror continues to flow."

Sisi's security agencies are taking no chances. Unconfirmed reports on social media said the Ministry of Interior declared a high-security alert, deploying forces to secure government installations and canceling the holidays of security personnel. While it remains to be seen whether Ali's call for protests will be heeded, one thing is certain: His videos have ignited a debate about the military's growing economic empire — a subject that has long remained a red line for Egyptians. His videos broke the fear barrier, ending a state of apathy that has prevailed in recent years.