With the 2017 census raising discussion of overpopulation in Egypt, a debate has ensued on whether movies have and can help create awareness of the need for family planning? 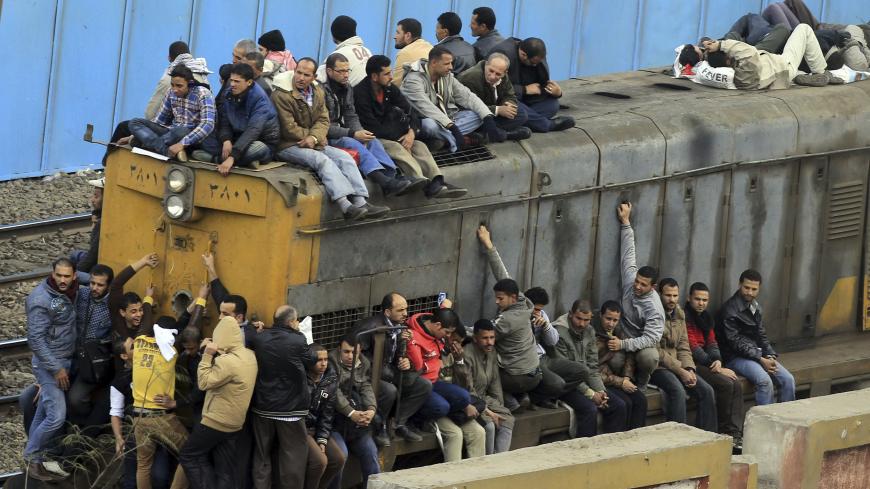 In announcing the results of Egypt's 2017 census on Sept. 30, President Abdel Fattah al-Sisi also identified major issues surrounding the population that has grown past 100 million: early marriage, insufficient housing and, most important, overpopulation. He said, “We must face these flaws in society in collaboration with civil society and media.” His reference to the media gave newspapers and websites the green light to analyze the potential of the media as well as the film industry in confronting overpopulation in the country.

Masr al-Arabia published an article Sept. 30 criticizing the media’s role in fighting overpopulation, quoting several experts who claimed that the media's approach to the issue is to please the government by paying lip service to family planning rather than promoting societal change by actually educating the public about concrete, specific measures to take.

Overpopulation and problems associated with it, such as higher costs of living and uncontrolled urbanization, have long been on the agenda of the Egyptian cinema, along with issues that are hampering the lowering of birth rates, such as a rejection of birth control. The film industry addressed the issue of overpopulation for the first time decades ago in “Mother Bride” (1963), which revolves around a father so burdened with taking care of his large family that he embezzles money. The sequel, “The Grandson” (1975), is about two daughters in the family who use birth control despite pressure from their mother and friends to have as many children as possible in as little time as possible.

Another movie, “A World of Children” (1976), is about a widower who marries a widow and lives under the same roof with 12 children. “Mouths and Rabbits” (1977) takes on the economic pressure under which a family is forced to live due to frequent childbearing. The father coerces his wife's sister to marry a wealthy man so the family can benefit from his money, prompting the sister to run away.

“Here Is Cairo” (1985), starring Mohammed Subhi, is about an architect from Upper Egypt who visits Cairo and is confronted with problems caused by overpopulation, such as traffic congestion, poverty, beggars and thieves. Adel Imam starred in “Police Station in the Street” (1986), about a family that practices family planning, but when their house collapses, faces multiple hardships while searching for a new place to live due to the rise in housing prices caused by overpopulation.

Other media have also played a role in trying to reverse the trend through awareness campaigns. Egyptian TV ran several campaigns about the dangers of overpopulation, including one called Hassanain and Mohammadain in the 1970s. For the campaign, the popular singer Fatima Eid targeted uneducated citizens from the countryside and Upper Egypt, encouraging them to only have two children so they can ensure their offspring's well-being and proper education. In the 1990s, a campaign featured the actress Karima Mokhtar, and another one involved the actor Ahmed Maher addressing men and inviting them to take responsibility for their families through birth control.

Asked whether these campaigns were successful, Tariq al-Shennawi, a professor of art criticism at Cairo University's Higher Institute of Cinema Arts, told Al-Monitor, “The film industry alone cannot have much of an impact. This issue is linked to many religious, economic and organizational considerations. For example, the government should redistribute the population to end population density in the Nile Valley and Delta by establishing new cities in the desert. Meanwhile, Al-Azhar and churches have to deal with [scholars] who prohibit birth control.”

Shennawi also said, “The film industry is capable of presenting serious and influential works, but it requires support from urban planners, religious authorities and government. A movie should be able to seriously address an issue, unlike previous ones that only scratched the surface of this major phenomenon. In such movies, overpopulation would somehow always come out victorious, due to how weak the characters usually are, and the producer’s need to always have a happy ending. For instance, in ‘The Grandson,’ the man fighting overpopulation ends up leaving his pregnant wife, which is a repulsive example. In ‘Mother Bride,’ we see a happy ending despite the crime of embezzlement. In ‘Mouths and Rabbits,’ all of the family problems disappear when a wealthy man takes it upon himself to take care of it.” In short, Shennawi noted, these movies do not take a firm stand against overpopulation, but instead send the message that families and society can manage.

Shawkat al-Masri, a professor of literary criticism at the Academy of Dramatic Arts, said, “The people feel that all the campaigns on television and movies are geared toward absolving the state, which is lax in its role in solving the economic and social problems of citizens and promoting birth control.”

Masri told Al-Monitor, “This is why citizens [continued to have lots of children]. The media and the film industry should be fully independent and reassure citizens so that they can trust the media on the issue of overpopulation and birth control.”

Mahmoud Khalil, a professor of journalism at Cairo University, told Al-Monitor, “The media and film industry play an important role in addressing the issue of overpopulation. The proof of this is that when awareness campaigns and films calling for family planning were no longer broadcast in the early 2000s, overpopulation rose again, and this was reflected in the recent census.”

Khalil added, “This is why I suggest that the state coordinate with the media and filmmakers on campaigns and movies that encourage family planning, the majority of which need to target average citizens in the countryside and Upper Egypt.”