Critics of the Egyptian government fear that a three-month extension of the state of emergency will be used to crack down on them. 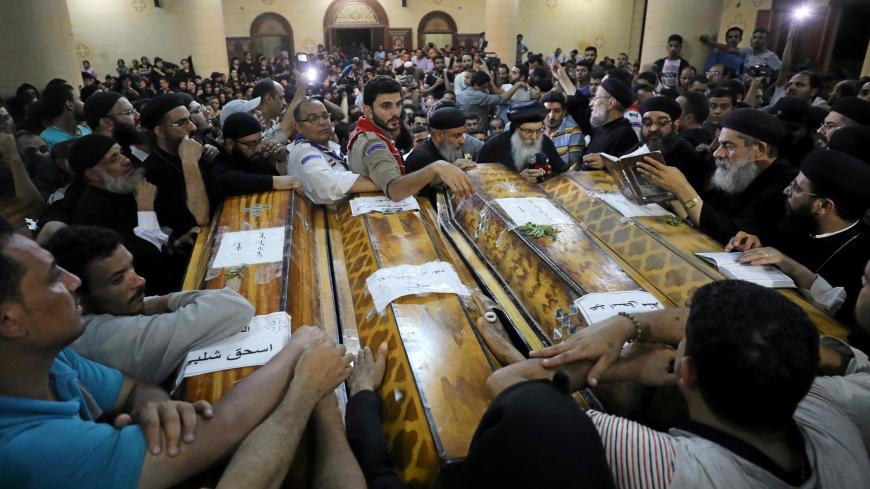 Mourners gather at the Sacred Family Church for the funeral of Coptic Christians who were killed in Minya, Egypt, May 26, 2017. - REUTERS/Mohamed Abd El Ghany

Egypt’s Cabinet on June 22 approved President Abdel Fattah al-Sisi’s proposal to extend the state of emergency by an additional three months, a move that rights advocates fear will further curtail freedoms in Egypt.

In a speech on the occasion of Laylat Ul Qadr (the night when the first verses of the Quran were revealed to the Prophet Muhammad), Sisi sought to justify the planned extension by highlighting the threat posed by extremist groups “that spread hatred and use religion to achieve their political goals.”

“Beware, this is the season of evil when 'they' will stop at nothing to undermine our stability and security,” he warned. Sisi was clearly referring to the militant groups that have targeted Egypt’s minority Coptic Christians in a recent spate of terrorist attacks claimed by the Islamic State. Twenty-six Christians were brutally killed and an equal number were injured May 26 when gunmen ambushed a convoy of Christians traveling from the southern province of Minya to a desert monastery. Six weeks earlier, twin church bombings that occurred moments apart in the Nile Delta city of Tanta and in the Mediterranean coastal city of Alexandria claimed the lives of 44 people (mostly Christian worshippers attending Palm Sunday Mass), prompting Sisi to declare a three-month state of emergency nationwide. In a televised speech hours after the attacks, Sisi warned that the war against jihadis would be “long and painful ” and accused foreign powers of fueling instability in Egypt.

Skeptics argue that the regime is using the state of emergency to target government critics and opposition figures; they lament the government’s heavy-handed crackdown on dissent, which they claim has led to a spike in terrorist attacks.

“The imposition of martial law failed to prevent last month’s attack on the Christians’ convoy and has brought neither added security nor protection for Egypt’s Christians,” said Malek Adly, a lawyer and director of the Egyptian Center for Economic and Social Rights, who himself faces prosecution and a travel ban on charges of “inciting protests,” “spreading false news” and “attempting to overthrow the government.” Last summer, he spent 115 days in solitary confinement before he was released on bail Aug. 28. Despite his release, prompted by immense public pressure, the charges against him remain in place.

Last week alone, at least 120 activists were taken into police custody in the wake of a fresh wave of unrest in Cairo and other major Egyptian cities sparked by parliament’s approval of a controversial Egyptian-Saudi maritime demarcation agreement on two Red Sea islands signed in April 2016. Parliament’s backing of the deal challenged a January ruling by Egypt’s top court blocking the transfer of the islands to Saudi Arabia. An April ruling by a Court for Urgent Matters, however, had reversed the previous judicial decision, plunging the country into a legal quagmire. In an apparent attempt to clear up the confusion, Egypt’s High Administrative Court last week suspended all rulings on the deal “to mull over which court has jurisdiction over the case.” Two days later, Sisi ratified the agreement, abruptly ending the monthslong legal saga.

“It is not surprising that Sisi did not wait for the High Administrative Court’s final decision before ratifying the unpopular agreement,” Adly told Al-Monitor. “This is not the first time that the president shows a lack of respect for the judiciary and the constitution.”

Kamal Khalil, a prominent socialist activist, was among those held in custody in recent days for his stance against the islands deal and his participation in a protest outside the Journalists Syndicate. His arrest in a dawn raid on his home June 22 sparked outrage on social media, with activists slamming it as “a political vendetta to punish him for his activism.” He was charged with “inciting illegal protests” and “insulting the president,” the latter charge based on a Facebook post that, oddly enough, foretold his detention. “Write on the walls of your prison cell, Sisi’s sale of the islands is shameful treason,” Khalil had written just days before his arrest. While he was detained for 48 hours before his release on bail of 2,000 Egyptian pounds (about $110), his incarceration sent a chilling message to other opponents of the deal.

“The recent sweeping arrests of activists and members of liberal political parties such as Al Dostour and the Bread and Freedom Party are aimed at muzzling the opposition,” Adly said. He said the government considers activists and leftists more dangerous than the IS-affiliated jihadis staging an insurgency in the Sinai Peninsula. “Many of those imprisoned are vocal critics of the outlawed Muslim Brotherhood,” he noted, citing the case of researcher Ismail Iskandarani as one example. Iskandarani, an expert on Sinai affairs, has been in pretrial detention since December 2015 on charges of “affiliation with the outlawed Muslim Brotherhood” and “disseminating false news” — charges that his family insists are fabricated and meant to silence him. They believe his critical reporting on alleged violations carried out by security forces in Sinai may have provoked his incarceration.

Now that the emergency law has been renewed, Adly and other rights advocates fear that there will be many more arbitrary detentions and that basic rights guaranteed by the constitution will continue to be trampled upon. The blocking of dozens of websites in May that the government claims “have ties to the Muslim Brotherhood” signals tighter state scrutiny of media institutions and closures of those that do not toe the official line — a trend made possible by the continued state of emergency. Furthermore, the establishment of special courts that include members of the military in their composition (allowed for under the emergency law) will likely further undermine the independence of the judiciary. The case of seven men facing imminent execution after being hastily sentenced to death in what rights groups say are “grossly unfair trials” is a worrying development in that direction. There is widespread belief that the defendants were tortured to extract confessions that were used by the court to convict them of killing a police officer. A social media campaign by rights activists exhorting Sisi to order a retrial for the defendants has fallen on deaf ears. Critics blame the counterterrorism law decreed by Sisi in August 2015 for the spike in death sentences as the legislation allows authorities to impose heavy sentences for “terrorist” crimes (an elastic term that could include civil disobedience) and limits the appeals process before the courts.

Government supporters, meanwhile, are turning a blind eye to the increased repression and insist the state of emergency is necessary to protect the country. Mohamed Abu Hamed, a member of the pro-Sisi Support Egypt parliamentary bloc, told Al-Monitor “the state of emergency must continue until the terrorist threat subsides.”

But the spike in terrorist attacks nationwide — such attacks were previously largely confined to Sinai — is an indication perhaps that the government’s repressive approach has been counterproductive.

“It is time for the authorities to consider alternative ways of countering terrorism; social justice and inclusion hold greater promise for achieving security,” Adly said.