Human rights activists welcome a proposed limitation on pretrial detentions in Egypt, but some remain skeptical that the amendment would make a real difference on the ground. 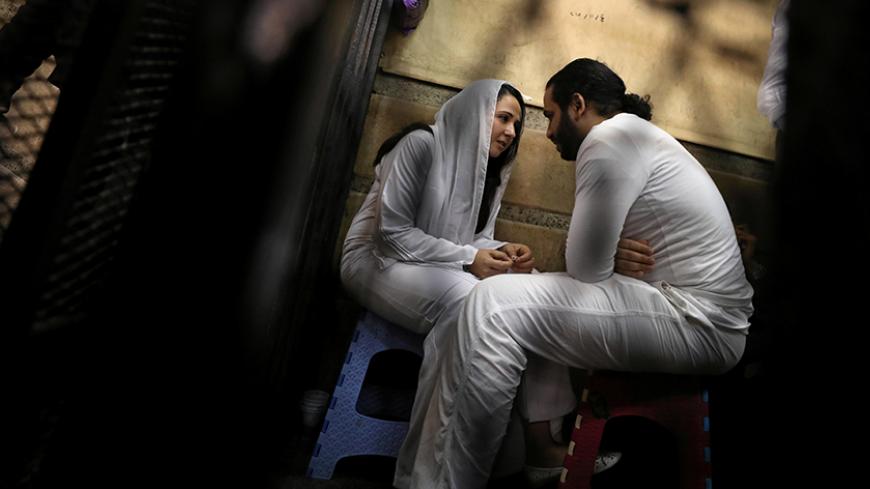 Aya Hegazy and her husband Mohamed Hassanein, the founders of a nongovernmental organization that looks after street children, talk inside a holding cell as they face trial on charges of human trafficking, sexual exploitation of minors and using children in protests, at a courthouse in Cairo, March 23, 2017. - REUTERS/Mohamed Abd El Ghany

The Egyptian parliament is currently drafting a bill to amend a provision of the country's criminal code that allows for a pretrial detention of up to two years. The proposed draft law would put a six-month ceiling on pretrial detention, slashing the current legal limit to a quarter of the period permitted by the current law.

Public debate on what rights activists say is a much-needed amendment was sparked by the acquittal in mid-April of dual US-Egyptian citizen and founder of the Belady Foundation Aya Hegazy, her husband Mohamed Hassanein and six co-defendants in the notorious Belady Foundation case. They spent three years in pretrial detention after their arrest on May 1, 2014, in a police raid on their nongovernmental organization, which provided shelter and services for Cairo’s street children. They were charged with operating an unlicensed organization, human trafficking, sexual exploitation of children and inciting anti-government protests.

Despite the lack of evidence against them, the former detainees were held in custody for over 35 months — well beyond the two-year limit for pre-trial and provisional detention specified by Egyptian law.

While Hegazy and her husband have since been released, their acquittal after their prolonged detention has spotlighted the plight of thousands of political detainees who may be suffering a similar fate. It has also sounded the alarm on the Egyptian authorities increasing use of the punitive measure since June 2013 “to silence activists, journalists and political dissidents,” according to rights advocates.

Welcoming news of Hegazy’s acquittal, lawyer Hafez Abu Seada, the founder and chairman of the Egyptian Organization for Human Rights, told Al-Monitor, “The authorities have been using pretrial detention systematically and unconditionally as a punitive measure against government opponents for several years now.”

He said, “The measure has been used in place of the long-standing state of emergency, which was lifted in June 2012 after 31 years.”

For more than three decades, Egypt’s security forces were given sweeping powers to arbitrarily arrest and detain suspects without charge and try them in special courts. In recent weeks, the government has reinstated the emergency law, which had been previously limited to the northern Sinai region, where the military is battling Islamist militants who are seeking to establish an Islamic caliphate. The state of emergency has been extended to other parts of the country since mid-April after twin church bombings on Palm Sunday claimed the lives of 47 people (mostly Christian worshippers attending Sunday mass) and injured dozens more in Alexandria and Tanta.

Abu Seada proposed that the government lower the legal limit of pretrial detention to six months with financial compensation for those who are acquitted. He also suggested the use of alternative measures such as house arrests, travel bans and probation measures against suspects awaiting trial.

Several local and international rights groups have also decried the rampant use of prolonged preventive detention that they say violates Egypt’s international human rights obligation. They say detention should only be used as a “last resort” and only if necessary, especially in the absence of well-founded charges.

According to a May 2016 report published by the Egyptian Initiative for Personal Rights (EIPR) a Cairo-based nongovernmental rights organization, at least 1,464 people in four governorates were in custody pending trial (at the time of the report’s release) for periods that exceeded the legal limit.

“Those were just the cases that we were able to document; there are many more,” Hoda Nasrallah, a lawyer and senior officer at the EIPR, told Al-Monitor. “Pretrial detention should be used only under exceptional circumstances; however, since mid-2013, it has become common practice in Egypt and has been used by the judiciary as a tool of political repression to crush dissent,” she said.

Under Egyptian law, the use of pretrial detention is restricted to defendants who have no permanent address or those who are unlikely to appear for trial. The measure can also be applied if investigators fear the evidence may be tampered with or destroyed, or if the defendants are perceived as posing a threat to national security.

Nasrallah complained that judges have ignored repeated calls by the EIPR and other rights organizations to release defendants on bail after they had completed the two-year limit specified by Article 143 of the Code of Criminal Procedure. She told Al-Monitor that the EIPR had sent letters to the president, the prime minister, the parliament speaker and the Constitutional Court requesting that the authorities amend the country’s Criminal Procedure Code to place tougher restrictions on pretrial detention. “We have also urged the government to reform the judicial system so as to cut the criminal court backlog that delays justice for suspects,” she said. Nasrallah noted that a controversial legal amendment introduced by former President Adly Mansour had removed the limit of pretrial detention for detainees who have been convicted and are appealing life and death sentences, possibly allowing for their indefinite detention.

With the state of emergency now back in place, Nasrallah said she can only expect a spike in arbitrary detentions in the coming months,

Other rights groups, including the quasi-official National Council for Human Rights (NHCR), have acknowledged the continued excessive use of pretrial and preventive detention during trials for nonviolent crimes. A report published in May 2015 by the NHCR put the number of pretrial detainees at 7,000, a vastly larger figure than that cited in the EIPR report.

Photojournalist Mahmoud Abu Zeid’s case is a flagrant example of the use, or rather misuse, of the measure to punish activists. Abu Zeid has been in custody for nearly four years now (nearly double the limit specified by the law). A family member told Al-Monitor his family has lost count of the number of times his trial has been adjourned.

Known to his fans as “Shawkan,” Abu Zeid was arrested on Aug. 14, 2013, and faces nine charges, including weapons possession, illegal assembly, murder and attempted murder in the Rabia al-Adawiya sit-in dispersal case — the violent dispersal by security forces of two pro-Muslim Brotherhood protest camps in Cairo that left at least 800 people dead and thousands injured. At least 700 co-defendants are being tried alongside Shawkan in the mass trial, the majority of whom are members and supporters of the outlawed Muslim Brotherhood. Shawkan, who was covering the protests as a freelance photographer for Demotix (a citizen journalists website and photo agency) when he was detained, has repeatedly denied the accusations leveled against him. Despite an online campaign calling for his release on health grounds (he is reportedly suffering from hepatitis C), his trial on March 8 was adjourned yet again to May 9.

Rights activists have welcomed the proposed limitation on pretrial detentions, but some remain skeptical that the amendment — if introduced — would make a real difference on the ground.

“After all, some judges have adopted a selective approach in using pretrial detention,” Nasrallah said, citing the example of police officers who have not been held accountable for malpractice. She recalled the case of Mahmoud Hussein who was detained for over two years following his arrest on Jan. 25, 2014, for no other crime than wearing a T-shirt with the slogan “No to torture” printed on it. While Hussein, 20, was released on March 24, 2016, the fate of many other detainees remains uncertain.

“It’s not about issuing a new law,” Nasrallah said. “It’s about enforcement of existing laws, respecting human rights and ending the culture of impunity.”