A court decision to extend the pretrial detention of hundreds of political prisoners without their presence raised the ire of rights organizations calling for the detainees’ immediate release. 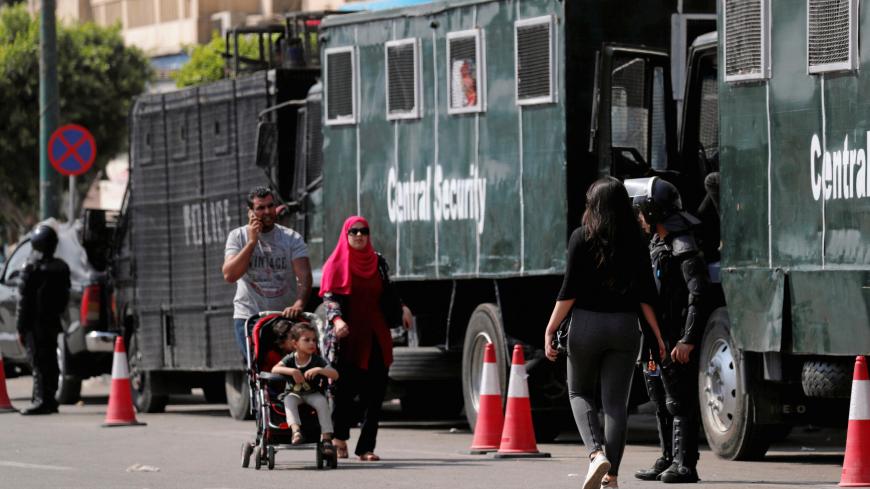 People walk in front of Egyptian riot police on Tahrir Square on the road to the US Embassy in Cairo, Egypt, May 14, 2018. - REUTERS/Amr Abdallah Dalsh

CAIRO — Egyptian rights lawyers and organizations told Al-Monitor about the dire legal violations that the Egyptian authorities are committing by issuing court decisions to extend the pretrial detention of political prisoners without allowing them to appear before a judge. These organizations have called for the release of all those whose detentions were extended in the past few weeks, specifically since early April when Egypt began implementing its preventive measures to counter the spread of the coronavirus.

Rights lawyer Islam Salameh told Al-Monitor, “During its May 6 sessions, the Cairo Criminal Court decided to extend the pretrial detention of 700 political detainees; none of them appeared before the judge in court.”

He revealed another legal violation, which is “not allowing lawyers to attend the court sessions or present requests for bail or conditional release. The court orders were issued in less than a minute.”

Ramadan Ahmad, a rights lawyer and member of the defense committee handling several prisoners in the 2019 Case No. 930, known as “Coalition of Hope,” which includes several journalists, politicians and activists, told Al-Monitor, “In [another] May 5 session the [Cairo] Criminal Court extended the pretrial detention of more than 560 people who were not brought from their cells to appear before court and whose defense cases were not heard.”

A media official at the Ministry of Interior commented on how the security officers did not transfer the detainees from their cells to court, saying that “it is part of the state measures to fight the coronavirus and ban gatherings.”

The source told Al-Monitor on condition of anonymity that the decision of the Ministry of Justice to suspend work in some courts aims to prevent a second wave of the coronavirus. Asked about the link between suspension of court activity and preventing the detainees from appearing in court, which is not included in the ministry’s decision, the source refused to answer.

On April 10, the Ministry of Justice extended the suspension of court activity for as long as the nationwide curfew is in place.

The Egyptian Commission for Rights and Freedoms, a Cairo-based rights organization founded in 2013, issued a legal commentary on the renewal of detention without the presence of the defendants and stated that “any extension of the pretrial detention in the absence of the defendant and without their appearing before a judge is considered absolutely null, and the concerned detainee must be released.”

The commission added, “Extending the detentions in the absence of the defendants is a blatant violation of the legislator’s guarantee to defend people in pretrial detention and ensure their appearance before a court to lay out their case.”

Former presidential candidate and rights lawyer Khaled Ali said that he would lodge a complaint with the Supreme Judiciary Council, which is the highest administrative, judicial authority in Egypt that handles complaints against judges, and another complaint to the Egyptian public prosecutor, the highest prosecution authority in Egypt, to demand the release of political detainees whose detentions were renewed without their presence in court.

Ali told Al-Monitor, “The extension of detentions is null and might harm the course of justice and fair trials in Egypt. Therefore, I demand their release, and I will lay out in my argument all legal grounds underlining the importance of the release of political prisoners who have been in pretrial detention in breach of the law.”

Article 136 of the Egyptian Criminal Procedure Code states, “The judge shall hear the statement of the public prosecution and defense arguments prior to issuing an arrest warrant, and the warrant shall include the report of the crime of the accused, the sentence and the grounds on which the case was made.”

The Arab Network for Human Rights Information, a Cairo-based rights institution founded and directed by prominent rights activist Gamal Eid, denounced the extension of pretrial detention in the absence of the accused.

In a report released April 29, the network wrote, “Pretrial detention is a measure that constitutes a severe violation of personal freedoms. … International and domestic legislation is keen on restricting it [pretrial detention] by establishing a set of rules, conditions, justifications and time limits to specify its duration, otherwise it would be void, thereby necessitating the release of detainees.”

The network added that the Ministry of Interior must respect the principle that an accused person is presumed innocent until proven guilty. The ministry must refrain from arresting and imprisoning opponents immediately and stop using the coronavirus pandemic as an excuse to refrain from transferring prisoners to appear before the specialized courts to examine their sentence renewal or release. The right to a trial and to justice must not be squandered, it concluded.

Al-Monitor tried to contact the media burdeau of the Minister of Justice regarding the legal violations, but there was no answer.

Mohammad Salim, a member of pro-government Egypt Support Coalition and legal adviser, told Al-Monitor over the phone, “The times are exceptional due to the coronavirus outbreak and we must take exceptional decisions and measures,” in reference to the decision to extend the pretrial detention of prisoners in their absence.