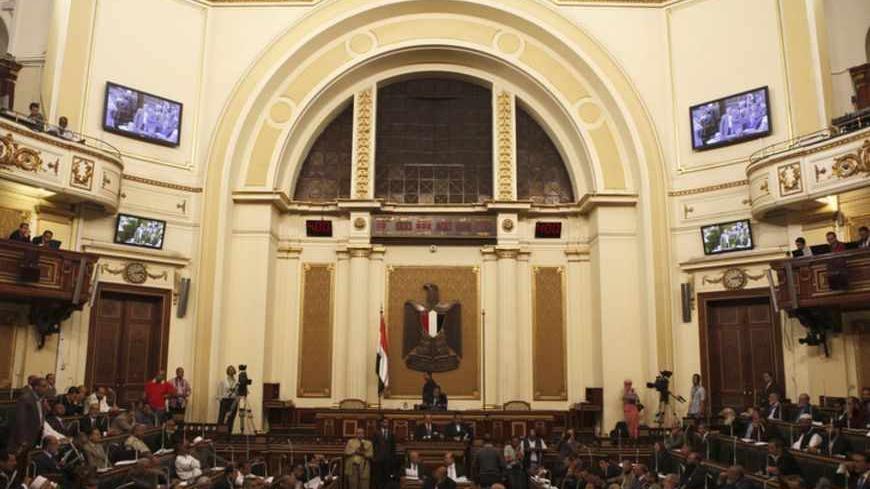 A general view shows the Shura Council during its meeting in Cairo, May 25, 2013. - REUTERS/Amr Abdallah Dalsh

In a surprising decision, Egypt’s Supreme Constitutional Court (SCC) ruled on June 2 that the Shura Council, currently the country’s only functioning legislative body, and the Constituent Assembly, which drafted the December 2012 Constitution, are unconstitutional. The ruling, however, is of little immediate impact, as in its judgment, the court authorized the Shura Council, the upper house of parliament, to remain seated until the election of a new People’s Assembly, the lower house of the legislature. The date of that election is yet to be decided as the electoral law is still being amended.

The court found that the electoral law under which the Shura Council was elected violated the principles of equality and non-discrimination because party members were allowed to contest the two-thirds of seats reserved for parties as well as the one-third of seats allotted for independents. The judgment is in accord with the SCC’s legal reasoning for dissolving the People’s Assembly in June 2012.

The decision proved legally complicated due to the change in the country’s legal framework between the February 2012 Shura Council elections and the court’s June 2 ruling. The SCC explained that its ruling on the council’s unconstitutionality is based on the March 2011 provisional constitution in effect at the time of the Shura Council elections because the December 2012 Constitution cannot be retroactively applied.

The court’s decision to allow the Shura Council to continue its work, however, is based on Article 230 of the December 2012 constitution, which protects the council from dissolution until the election of a new People’s Assembly. As stipulated by the article, the court also ruled that new Shura Council elections must be held within six months of the first meeting of the People’s Assembly.

The 100-member, Islamist-dominated Constituent Assembly, which drafted the new constitution, was ruled invalid on the ground that some of its members had been selected from the unconstitutional Shura Council.

Although the legal impact of the decision to the existing political structure is limited, the decision comes as a political blow to the Shura Council by further undermining its legitimacy. The ruling also comes at a time when tensions are running high between the judiciary, perceived to be pro-Mubarak and anti-Islamist, and the Islamist executive and legislature. The parties are currently caught up in a bitter battle over an amendment to the judicial authority law, which reduces the retirement age of judges from 70 to 60, to take effect immediately upon passage. The amendment is viewed as an attempt by the Muslim Brotherhood to purge the judiciary of senior justices, many of them appointed under ousted president Hosni Mubarak, and replace them through appointments with Brotherhood sympathizers. Such an amendment would result in the forced resignation of more than half of the 11 SCC justices, according to the Associated Press.

The Shura Council, historically a powerless, consultative body, gained full legislative powers through the December 2012 Constitution as a result of the dissolution of the People’s Assembly. Critics of the council allege that it has overstepped the bounds of a transitional, caretaker body by passing and continuing to vote on significant economic and political legislation. There are also questions about the body’s democratic mandate as only 7% of the electorate took part in the vote for the council, and many political parties did not run candidates, recognizing it to be a politically insignificant institution.

The SCC’s decision elicited a range of responses from the Muslim Brotherhood's Freedom and Justice Party (FJP), from condemnation as being a political move to support for it ending the debate over the Shura Council’s role as the legislature.

Mohamed El Beltagy, a member of the FJP Executive Bureau, wrote on his Facebook page on June 2 that the SCC was aware that its decision to nullify the Shura Council and Constituent Assembly has no real impact, but that the “seriousness of the decision hit upon the popular legitimacy of the existing institutions and order — (the Shura Council and the Constitution) to increase state controversy, conflict, and differences, and to find a case for rejection, rebellion, and coup based on the decision.” He further complained, “The Constitutional Court will continue in the game of politics and spreading crises. It has disrupted the supervisory authority in the country for more than a year.”

Mohammed El-Baradei, a leader of the opposition National Salvation Front, viewed the decision as a sign to renew the transitional process. He said via Twitter on June 2, “We must start from the beginning with a genuine national consensus to develop a framework of a new legal and constitutional framework to save the country, preserve the structure of the state, and get us out of the impasse in which we put ourselves.”

Although the Constituent Assembly has been declared invalid, the constitution it drafted is expected to remain in effect. It was not explicitly stated in the court’s decision, but the SCC used the new Constitution as a reference in the ruling on the Shura Council. It further added that even if the Constitution failed to fulfill every aspiration, it was voted on and approved by the people, making it the highest law of the land.

A brief statement on June 2 by the office of the president confirmed that since the Constitution had been approved by a majority of voters in a referendum, it is the duty of all state authorities to protect and respect it. Zaid Al-Ali, a senior adviser on constitution building for IDEA International, offered via Twitter on June 2, “Decisions that are passed by institutions before they are dissolved remain in force.”

Although the president’s statement asserted that the Shura Council will continue to function in a full legislative capacity until People’s Assembly elections, the legal reality of whether the council can, indeed, legitimately continue to legislate remains unclear. Whether it retains this power will prove significant in the ongoing debate over the judicial authority law and the Brotherhood’s success in implementing its agenda for the country.