Activists from Giza are forming an all-women slate of candidates for the Egyptian elections, writes Zenobia Azeem from Egypt. 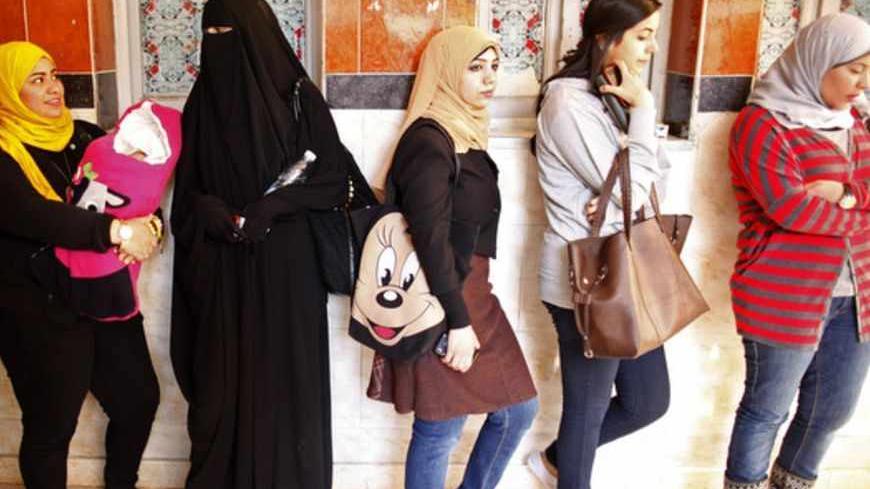 Women queue at a polling station to vote in the second and final round of a referendum on Egypt's new constitution, in Giza, south of Cairo, Dec. 22, 2012. - REUTERS/Khaled Abdullah

On March 6, a Cairo administrative court ruled the election laws unconstitutional, suspending parliamentary elections slated to start in late April. The decision came after the Shura Council bypassed submission of the revised electoral-laws draft to the Supreme Constitutional Court (SCC), raising concerns about the laws’ constitutionality. After stating that he would respect the court’s decision, President Mohammed Morsi appealed the Administrative Court’s decision via the State Litigation Authority.

For Zeinab Afify, chair of The National Orphans Association and the Social Services Association, among others, the delayed election is good news. She is leading a group of eight women to form Egypt’s first independent all-women candidate list to contest the upcoming elections in the first disctrict of Giza. The chance for Afify to form an independent candidate list is the result of an amendment to the election laws after the SCC dissolved the previous parliament in June 2012. Previously, in what the SCC judged to be a breach of the principle of equality, only political parties could run lists in elections. Independent candidates were only permitted to run as individuals.

A gracious, articulate women who has spent the past 25 years conducting women’s development work, this is her first foray into politics. Like most ordinary Egyptians, she is frustrated with the current political options, finding no one who represents her interests or beliefs.

“We are the majority of Egyptians. We are Islamic, but not Islamists,” she says.

Her colleagues on the list are lawyers, doctors and engineers aged between 30 and 60 who also have no previous political experience. More than half are women with whom Afify has worked through her Charitable Pearls Association, an organization that she helped found and also chairs. Her approach to social work is reflected in her political beliefs: “The difference between us and the Islamists is [that we] teach women how to be independent and critical thinkers.”

Other political parties asked Afify to join their lists, but, disenchanted with them, she refused. For her, women voted, but did not benefit.

“The problems of women were not solved after the new parliament. No one from the Islamists, Salafis or liberals helped,” Afify explains. Moreover, the Shura Council voted against a proposed amendment requiring at least one woman to be in the top third of all candidate lists last week. Thus, the law remains as it was during the 2011-2012 parliamentary elections; at least one woman must be on the list, but in any position. This renders it a superficial provision to encourage women’s political participation, as many parties slot women toward the bottom of the list, where it is impossible for them to win a seat.

This change to the electoral law continues the “severe deterioration on the level of political rights of women,” according to a 2013 report issued by the Egyptian Center for Women’s Rights. Women’s representation in parliament decreased to two percent in 2011, after reaching 12.5% in 2010 under deposed autocrat Hosni Mubarak’s regime; this decline lowered Egypt’s status to 128 of 131 countries for female representation in parliament. The World Economic Forum’s Global Gender Gap Report ranked Egypt 124 of 135 countries regarding economic opportunities for women.

There have also been various draft laws put forward on women’s issues by the Islamist parties seeking to undermine women’s current rights regarding divorce and child custody. In a heavily criticized statement, the Muslim Brotherhood denounced the Convention on the Elimination of All Forms of Discrimination Against Women, of which Egypt is a signatory but with reservations, claiming that it violates all principles of Shariah and the Islamic community.

Afify, who has long worked with divorced, widowed and abused women, is determined to change these conditions for women and ordinary Egyptians by engaging the political system. Although the liberal opposition has employed the strategy of boycotting elections and refusing discourse with the current regime, Afify refutes, “It is necessary to enter elections because if you don’t, your opinion will not count.”

Although her expectations for victory are realistic, hoping to be elected herself as the first candidate on the list, along with another colleague, she has grand plans after that, sharing, “In parliament, we will make a lobby of women from our NGO to support me. We must move society forward.” The women’s list is also an initiative for women from divided religious and ideological backgrounds to unite around women’s issues.

Tensions between Muslims and Christians have been high after the revolution, especially as many Christians fear that the Islamist government will attempt to limit their rights and status in society. Afify hopes to have at least two women representing Christians, liberals and Islamists respectively on the list. So far, she has struggled to find liberal and Christian women who are willing to participate with them in the list, saying, “The liberals see us in hijab and say that we are Islamists, but we are the people in the middle. Many of our ideas are liberal.”

The Charitable Pearls Association is well known in Giza and works closely with schools and mothers providing after-school programs for children and training for women. Amany Zaghloul, a board member and candidate on the women’s list, is confident that their detailed knowledge and reputation in local communities will help win over women’s support for them.

Naglaa Fathy, a soft-spoken, poised young woman who was trained by the Charitable Pearls Association and is now a trainer herself, is leading the development of the campaign strategy. Armed with detailed constituency maps, voter registration figures and activity calendars, she explains that they have approximately 50 volunteers at the moment who are speaking to women in their communities about the list. According to Afify, “In the end, women vote, but most women are told how to vote. We want women to make their own decisions.”

While they are confident about winning much of the female vote, they are aware that persuading men to support them will be more difficult. The idea of an all-women’s list is still new and strange for many Egyptians, while others may continue to oppose them for ideological reasons. Laughing, Afify told Al-Monitor that her own brother is a member of the Muslim Brotherhood and vowed to vote against her in the election for the Freedom and Justice Party’s candidate.

However, this group of woman is determined to prove to all Egyptians that women can help solve Egypt’s problems.

Zenobia Azeem is a Cairo-based freelance writer. She has worked in the field of international election observation for the past five years, primarily in the Middle East. Follow her on twitter @elbowsymmetry.