The Islamist Strong Egypt Party has called for a boycott of the 2015 parliamentary elections, but critics say the move will not hurt the legitimacy of the new parliament. 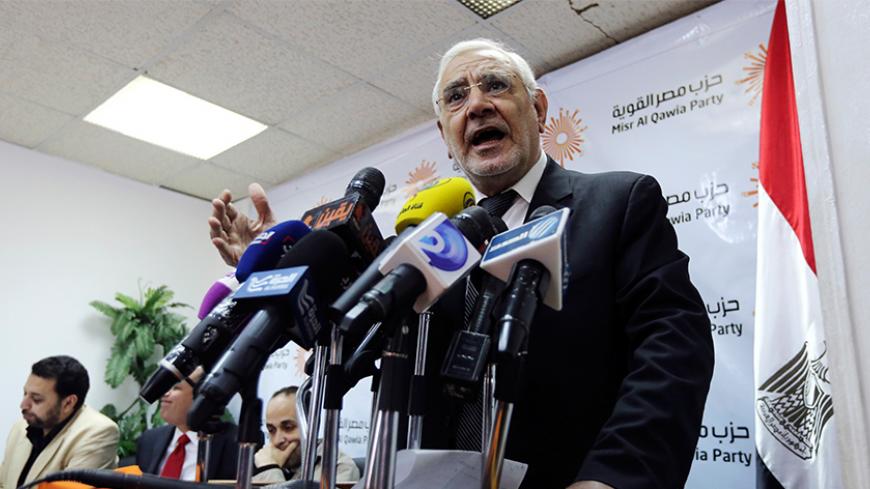 As Egyptians get ready to hit the voting booths for the parliamentary elections on Oct. 17, the Strong Egypt Party has called for a boycott.

The centrist Islamist party announced in an Oct. 14 statement that its call for boycotting the election is a reaction to “the state institutions that are biased toward certain candidates and lists to form a parliament allied with the executive power, by holding mock elections to choose between a supporter and a supporter.”

“For any election to be meaningful, there must be a fair rivalry,” Ahmed Emam, the party’s spokesperson, told Al-Monitor. “Security bodies are strongly influencing the political scene and systematically cripple any opposition force that can create a real difference,” he said.

At least five party members are currently in prison on political charges, including three who were arrested in 2014 and sentenced to three years in prison for organizing a campaign against the constitutional referendum.

“We are being harassed in our businesses and in our jobs,” Emam said, adding that funding and donations to the party have declined significantly due to continuous intimidation. “It is difficult for us to even gather enough money to pay the rent for the party’s offices, let alone fund electoral campaigns,” Emam said.

Emam explained that under the current circumstances, the party’s main goal is to survive, keep its legal license to operate, use the few channels of communication left to convey its ideas to the public and bet on a future where they will be able to operate freely again.

Amid an ongoing crackdown on political activists and hundreds of cases of forced disappearances, former Vice President Mohamed ElBaradei tweeted Sept. 10, “A reminder: The call we have seen since 2010 to boycott parliamentary and presidential elections, referendums and other forms of sham democracy has been an effective method for change.”

Some of Egypt’s most prominent independent human rights and political activists joined hands in forming the Sahwet Misr list, which aimed to compete on 105 seats out of the 120 seats dedicated to lists. The list included members of multiple opposition parties, such as the Egyptian Social Democratic Party, the Socialist Popular Alliance, Misr El-Horrey and El-Adl.

It also included notable public figures such as George Eshak, a member of the Egyptian Human Rights Council; Bothayna Kamel, co-founder of the Shayfenkom initiative for popular oversight on government; and Ahmed ElBoraie, former minister of social solidarity.

“We did not intend to boycott the elections; we were forced out of it through security interventions and subversive laws,” said Yehya El-Kazaz, a candidate on the list, who finally decided to withdraw from the elections citing constitutional violations in the electoral process.

Kazaz is a geology professor at Helwan University with a long history of political activism. He was an influential member in the Kefaya movement, which played a role in toppling former President Hosni Mubarak in 2011, as well as the Tamarod movement, which gathered petitions for early presidential elections to oust Islamist President Mohammed Morsi in 2013.

“We were the only list that did not include any members who were associated with Mubarak’s National Democratic Party or the Muslim Brotherhood,” Kazaz said, adding, “A powerful security agency scared some candidates away from the list, but we were able to replace them with others who were stronger and more determined in facing threats.

Another such movement, the Sahwa list, completed all of its paperwork, which included a mandatory medical report on every candidate at a cost of 4,200 Egyptian pounds ($536) each. The elections were supposed to take place on March 22, but Egypt’s Supreme Court ruled against the constitutionality of the electoral law on March 1.

After a drafting committee headed by Transitional Justice Minister Ibrahim El-Heneidy amended the law to meet the Supreme Court's requirements, Sahwa resubmitted its papers. Three days before the submission deadline, a new court order required them to repeat all the medical checks.

“This is a breach of the equal opportunity principal stated in the constitution,” Kazaz explained, since candidates who tried to run previously in March would have to pay much more than those who are running for the first time in October.

Repeating all the medical checkups for the entire list would have cost around 300,000 Egyptian pounds ($38,312). “We are not a rich list; we do not enjoy the support of wealthy businessmen, nor a powerful party,” Kazaz said, adding, “But more importantly, it is impossible to defend the constitution inside a parliament built upon breaching it.”

After failing to overrule the court’s order to repeat the medical exams or get an extension, the list announced its withdrawal.

“Sometimes, it is possible to judge a book from its cover. This technicality was part of a bigger scheme to deter opponents and control the outcome of the elections before it even starts,” he added.

Kazaz argues that President Abdel Fattah al-Sisi wants a parliament that will agree to amend the constitution to grant him more powers. Egypt’s president has said the constitution “was written in good will, but that is not good enough to govern a state.”

Sahwet Misr repeatedly announced that changing the constitution is a “red line,” and vowed not to let anyone cross it if they won the elections.

“Now all we have are pro-government candidates competing with each other. We won’t give such a parliament legitimacy through our participation when everything about it is a charade,” Kazaz said.

But do the withdrawals and boycotting affect the parliament’s legitimacy?

Amr Hashem Rabie, a researcher at Al-Ahram Center for Political and Strategic Studies, told Al-Monitor that he does not expect that the boycott will have much of an effect on the parliament’s outcome.

“The Strong Egypt Party is not a major political player, and its absence doesn’t change the outcome of the elections much,” Rabie said, arguing the Sahwa’s withdrawal over a technicality does not make a strong statement against the legitimacy of the parliament.

Shehab Wagih, spokesperson for the Free Egyptians Party, which is currently competing for 236 seats, agrees. “We do not see in the boycotting or withdrawal calls any serious threat to the legitimacy of the next parliament,” Wagih told Al-Monitor. He added, “The parties that announced their withdrawal didn’t have much popularity in the first place.”

Emam said that he is well aware that the boycott is not enough to change the outcome significantly, “But the less people vote, the less legitimate the parliament will be.”

As for Kazaz, he believes that the regime will soon pay the price for its actions. “This is a state that doesn’t care if it has any opposition represented in the parliament, even if only to keep the illusion of democracy, and we all remember the fate of a similar parliament,” he said, pointing to the 2010 parliament that was partially responsible for igniting the 2011 protests.

With no center-left representatives nor vocal critics in the race, there are no radical differences between most of the current contenders’ programs and ideologies. Regardless of who wins or loses, no strong opposition is to be expected in the 2015 parliament.