Some are calling for a boycott of the upcoming Jordanian parliamentary elections in protest against anticipated manipulation. 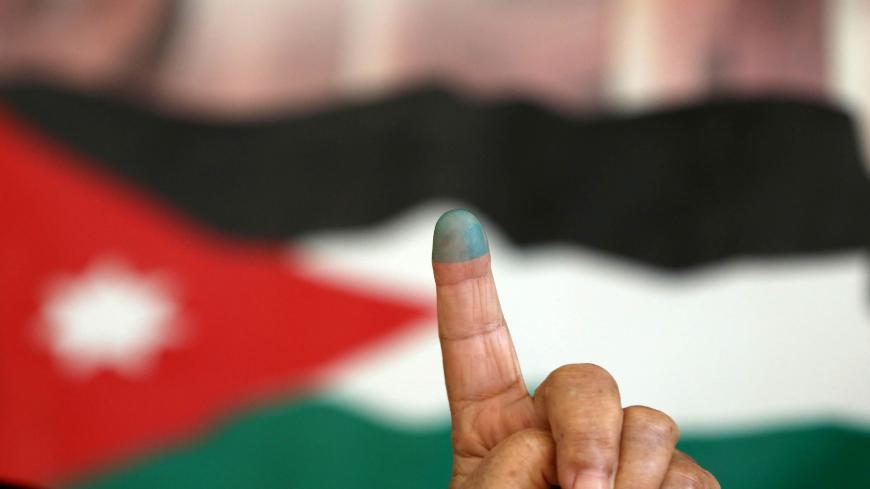 A Jordanian woman shows her ink-stained finger after casting her vote in the parliamentary elections at a polling station in the capital Amman, Jordan, Sept. 20, 2016. - KHALIL MAZRAAWI/AFP via Getty Images

Jordan’s Muslim Brotherhood and its political arm, the Islamic Action Front, seems to be heading toward a boycott of the parliamentary elections slated for Nov. 10, amid a clampdown on public freedoms in the kingdom.

Islamists are also concerned that government intervention in the upcoming elections will affect the integrity of the electoral race.

This comes against the background of growing tensions between Islamists and the Jordanian authorities after the Court of Cassation dissolved July 15 the Muslim Brotherhood’s branch in Jordan. This was followed by an arrest campaign of Brotherhood members inside the kingdom’s Teachers Syndicate whose activity was suspended in August.

The spokesman for the Islamic Action Front, Jordan’s largest opposition party, Thabet Assaf, told Al-Monitor, “Many reasons push us to boycott the upcoming parliamentary elections. This is mainly due to the general political conditions in the country, including recurrent attacks on unions, such as the Teachers Syndicate, and the successive crises such as the marginalization of the parliament,” in reference to passing a controversial gas deal with Israel without submitting for parliament approval.

“Add to this unprecedented security pressure on potential candidates [of the Islamic Action Front] and anticipated manipulation of the elections. We have evidence and data on severe pressure exerted on candidates to withdraw from the electoral race. We, therefore, feel there are no guarantees of the integrity of the elections,” Assaf noted.

“The Islamic Action Front’s Shura Council will decide whether the party will boycott the elections. Its decision will be binding. The matter has not been decided yet, but there is an inclination within the Islamic movement to opt for a boycott,” Assaf added.

Islamists in Jordan ended their boycott of parliamentary and municipal elections when they ran the 2016 parliamentary elections. They won 14 seats out of 130.

Jordanian Islamists had boycotted the parliamentary elections in 1997 in protest against the lack of political reforms, and the one-person voting system, which did not allow the formation of electoral blocs, paving the way for candidates to win in the elections based on regional and tribal considerations. In the 2007 elections, the Islamic Action Front withdrew from the municipal elections, citing fraud. They also boycotted the parliamentary elections that took place in 2010, in addition to the 2013 elections due to what they called “the absence of guarantees of integrity.”

Meanwhile, Secretary-General of the Jordanian Democratic Popular Unity Party Saeed Thyab announced his party’s participation in the elections. He told Al-Monitor, “Although we are aware that the current circumstances are not favorable in light of the Defense Law being enforced — and which has restricted public life and led to political arrests — we believe the parliamentary elections are an important constitutional duty in political life. And we announce our participation in them.”

Yet Islamists are not the only ones calling for boycotting this year’s elections. Angry teachers joined them after a public prosecutor in Amman ordered July 25 a two-year closure of the Teachers Syndicate, its branches and offices nationwide, and the arrest of 13 of its members.

This comes after a judicial complaint was filed by some teachers against the syndicate’s council for donating half a million Jordanian dinars ($705,000) to Himmat Watan (A Nation's Effort) fund that the government launched to collect donations for those affected by the coronavirus pandemic.

Head of the Legal Committee of the (suspended) Teachers Syndicate Basil al-Harb told Al-Monitor, “The arrest of teachers’ representatives in this way and the suspension of the work of the elected syndicate led to a loss of confidence in the executive and legislative authority. This will be reflected in electoral choices, especially since the parliament stood idle in the teachers' crisis.”

The Independent Election Commission — the official body responsible for the elections — believes that boycotting parliamentary elections is not in the interest of those who have pending issues or demands, and those who want change.

The commission’s spokesman, Jihad al-Momani, told Al-Monitor, “The Islamic Action Front talks about prior security pressures on potential candidates. But the Independent Election Commission provides sure and unquestionable guarantees on the integrity of the elections.”

He said that these guarantees start with the voters’ lists in which the names of voters are listed automatically. “There is no transfer of votes from one constituency to another,” he noted. “The other guarantees include monitoring the election process and the supervision of the vote-counting process by observers, delegates and the media.”

Addressing those calling for a boycott, he added, “The way to bring about change is by participating in the elections and heading to the ballots. This is how representatives of the people are elected to the constitutionally recognized legislative authority. Boycott is a right, but participation is also a right and a duty. Those who boycott elections will still have someone speaking on their behalf in parliament. We do not object to the boycott, but we want everyone to participate.”

In regard to restoring confidence in the elections after the suspension of the work of elected councils such as the Teachers Syndicate, Momani said, “We are building a new trust relationship. The presence of the commission has created confidence, but this is just the beginning. Trust is built slowly and we are keen on holding fair elections to gain this trust. We do not supervise the Teachers Syndicate’s elections; this is an issue between teachers and the government.”

He told Al-Monitor, “The reservoir of votes among the Muslim Brotherhood’s voters was undermined by the defect of leaders and the formation of other parties. But the turnout will not be affected.”

He added, “The next parliament may witness the absence of an opposition parliamentary bloc. I think the Muslim Brotherhood’s threat to boycott the elections aims to seal a certain deal or to oblige the government to provide guarantees for the integrity of the elections.”

According to Rased, a Jordanian nongovernmental organization that monitors elections and government activities, 1,076 Jordanian men and women plan to run in the upcoming parliamentary elections. Rased noted that 42 parties will participate in the elections and six of the 48 licensed parties have yet to make up their mind.