The role of women in Egypt’s transition will be a barometer of progress and democratic change. 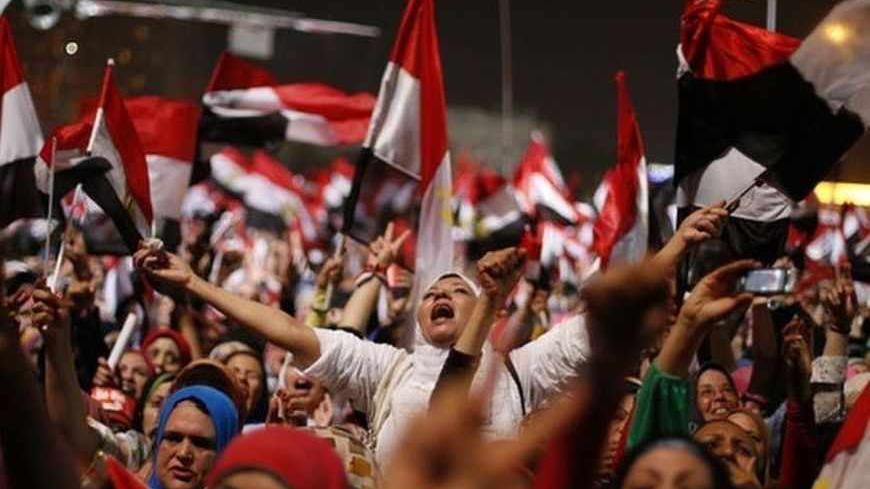 On June 30, the thunderous chanting of Egyptian women protesting against Mohammed Morsi, demanding that he leave office, echoed through the streets. Their voices were louder than their fellow men, adopting a collective firm, assertive tone that asserted their determination. Some female protesters carried very telling signs, expressing phrases such as “We are the coup,” their way of emphasizing their frustration with what many of them perceive as Morsi’s regressive policies.

In March 2013, despite the mounting opposition, the Muslim Brotherhood decided to shun half the society by releasing a strong statement condemning a United Nations declaration draft calling for an end to all forms of violence against women, claiming that it would lead to the “complete disintegration of society.” Such overtly regressive views have reaffirmed what many Egyptian women feared: The Muslim Brotherhood’s modern, progressive image is as hollow as its democratic credentials.

Although the Muslim Brotherhood has an active female branch, women members are forbidden from ever holding the position of Brotherhood guide and can't even participate in the counsel office. Its most prominent cadres can hardly be described as feminist, even according to the most generous of definitions. Take Azza al-Garf, for example. One of only nine women elected in the short-lived post-January 2011 lower house of parliament, she severely criticized the right of a woman to divorce her husband and objected the ban on female genital mutilation, a practice that still claims innocent lives.

The story of Islamists and women in Egypt can shed some light on the current identity war and the great societal rift. The rise of political Islam in the 1970s has been associated with a powerful campaign for an Islamic dress code. In fact, the rise of the hijab in Egypt was synonymous with the rise of political Islam and indicative of its appealing message. In addition to the “Sisters,” the female members of the Muslim Brotherhood, there was a growing number of other non-members who were either supporters or sympathizers. The niqab also made a strong showing in Egypt and gradually became linked with the rise of various Salafist groups — again, not just active Brotherhood members, but other supporters and sympathizers.

However, a subtle shift has taken place. By the end of the 1990s, roughly, the prevalence of the hijab and niqab in Egypt among the wider public had created another group of conservative Muslims that supported neither the Muslim Brotherhood nor the various Salafist groups. Its political affiliations and sense of identity stayed dormant during Mubarak’s era, only to be activated following the January 2011 revolution. The parliamentary and presidential elections have forced this group, like many other Egyptians, to articulate their political identity by exploring various political parties. Naturally, some chose Islamist parties, but others did not and even boycotted them. What were broadly described by the Western media as liberal and Islamic camps were, in fact, loosely defined Islamist and non-Islamist camps with many undecided voters moving in and out due to the many variable dynamics in Egypt’s messy political scene.

Ironically, the election of Morsi and his year in office has helped many, particularly women, to rediscover their political and religious identities. It was rather patronizing for Islamists to try to convince women already following Islamic dress code that morality would be the salvation of society. Many of these women were already working hard to earn a living while dreaming about justice and equality, but received neither under Morsi’s rule. It was shocking for many women to see a young female activist slapped to the ground by a member of the ruling Muslim Brotherhood and to witness a member of the Shura Council’s human rights committee placing the blame on victims in Tahrir for their own rapes. It is indeed true that sexual violence existed well before Morsi; however, he made only cosmetic efforts to tackle it. Sadly, June 30 was also a horrible reminder for many women that sexual violence is still a major problem despite many efforts to tackle it.

The events of June 30 shattered the myth of the automatic loyalties of conservative Muslims to political Islam. The Muslim Brotherhood could not stomach the fact that ordinary Muslim men and women stood boldly against them, which is precisely why they stress the Coptic participation in their narrative of the coup, while portraying other opponents as naïve, tricked by the army’s propaganda.

Again, ironically, June 30 led the Brothers to appreciate the importance of their "Sisters." Rallies that had always been male dominated became mixed-gender demonstrations. Suddenly women were welcomed and encouraged to join, just like on election days, when supportive women were welcomed and encouraged to vote. This reminds me of the Muslim Brotherhood’s "charm offensive" in the United States in 2012, when they chose younger delegates, including women, to portray a progressive, modern party. When women supporters of Morsi lost their lives in the anti-Brotherhood violence, the "Sisters" held a press conference, rightly condemning the despicable murder. Their public show raises questions about their previous silence when many non-Islamist protesters lost their lives during military’s previous transitional rule.

To be fair, some positive developments have surfaced. Veteran feminist and journalist Sekina Fouad was appointed as the interim president and advisor of women’s affairs, and three women, all well known and respected, were appointed as ministers under the new government. The army that was once tainted by virginity tests has changed tactics and now strives to portray a pro-feminism image.

Will it work? Can post-June 30 Egypt become a better place for its women? It is hard to be optimistic when women are still dying on the streets of Egypt, but what is clear is that the tenacity and determination of Egyptian women represent powerful weapons. Egypt has thousands of years of history of active feminism, from Queen Hatshepsut to writer Nawal el-Saadway. All regimes that ruled Egypt but oppressed its women have ended up recorded in history under a negative light, and Morsi’s regime was no exception. Those who feared the photo of one Egyptian feminist and omitted it from government’s history books could never have survived in Egypt, with or without a coup. The junta that is now leading the country from behind will have the same fate if it does not fulfill its promises of restoring “true” democracy, grant the rights of women regardless of their political affiliations and fight Egypt’s despicable sexual violence.

The future of Egypt will depend on the progress of its women. Reform is a must, not just for the state, but also for all political parties, which must do more to protect their female members during demonstrations. The Muslim Brotherhood should also take a serious look at its internal dynamics, update its platform on women’s rights and stop seeing the “Sisters” as just a tool for image-boosting if it is serious about regaining its popularity among the Egyptian public.