Turkey Has Role to Play in Egypt

Turkey could be well-positioned to assist Egypt’s democratic transition, if it can shift its role from partisan to mediator. 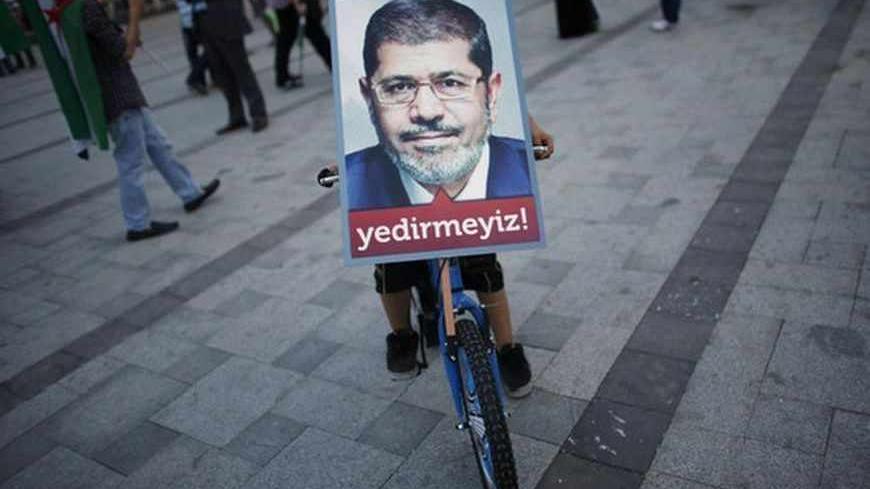 A boy balances a poster of Egypt's ousted president Mohammed Morsi that reads "We will not let you victimize him," during a pro-Islamist demonstration in Istanbul, July 1, 2013. - REUTERS/Murad Sezer

On July 9, Egypt’s Foreign Ministry summoned the Turkish ambassador over Ankara's calls for UN intervention in Egypt, following the controversial ouster of President Mohammed Morsi. The sharp deterioration in the relationship between the two nations could not be more different than the warmth Turkish Prime Minister Recep Tayyip Erdogan received on his visit to Cairo in September 2011. The hero’s welcome Erdogan received — which came only a few months after Egypt’s revolution against former President Hosni Mubarak — stemmed mainly from his ability to present the Egyptian public with a possible third way for politics, which was distant from the traditional fight between the generals and the Islamists. Many in Egypt viewed Erdogan as the man who stood against the military, and also offered the right balance between Islam and politics.

In post-Mubarak Egypt non-Islamist Egyptians trusted neither the ruling Supreme Council of the Armed Forces (SCAF) nor the Muslim Brotherhood. The SCAF was perceived as autocrats who ruined the Egyptian transition to democracy, while the Brotherhood was viewed as an illiberal cult wanting to play a democratic game for their majoritarian domination. Erdogan, somehow, managed to convince Egyptians that he had the answer to their problem. Here he was, a Muslim and a civilian democrat who boldly told Islamists, “One must not be afraid of secularism.” Ironically, Egyptian non-Islamists are not exactly secular but they are against the domination of Islamism, and they wrongly assumed that Erdogan is their man.

Following Morsi’s election, the Turkish influence started to grow exponentially in Egypt, including more Turkish financial aid and business cooperation; the Anadolu news agency became the trusted news agency for the presidential team; and even the Turkish suits worn by Morsi. That was all well and good, but many in Egypt were hoping for more from their big sister. Turkey, with its long experience in democracy-building, could easily help Egypt in two main areas: first in the transition to democracy, particularly on how to build an inclusive, wider coalition that includes non-Islamist groups, which would ultimately help to build a solid democratic system; and second, on governance issues, and how to rebuild the country’s institutions in a way that leads to justice and accountability.

In March 2013, Turkish Foreign Minister Ahmet Davutoglu wrote, “Turkey will continue to pursue its multidimensional foreign policy and draw on its new diplomatic assets to assist its neighbors undergoing this difficult phase [Arab Spring]. It is a historic responsibility for Turkey to assume that role: We believe that the regional order can be rebuilt only after people's demands for honor, freedom and good governance are expressed in their political systems.”

There is nothing that contradicts the above statement as much as the Turkish policy toward Egypt. Unfortunately, in its relationship with Egypt, Turkey has decided to apply an odd mix of contradicting approaches — such as a partial zero problem doctrine — by happily leaving Morsi to mess up as long as he is serving wider Turkish interests in the region, particularly in Syria and Gaza. In a way, Morsi has become an opposite version of Mohammed Ali Pasha, an autonomous but loyal Ottoman civil servant who drastically failed rebuilding a modern state in Egypt. Turkey also ignored Morsi’s constitutional decree that granted him unlimited power, his bad governance, his poor leadership skills and his growing unpopularity among the Egyptian public and his “tribe,” the Muslim Brotherhood.

No wonder Morsi’s ousting came as a rude wake-up call for Turkey — Erdogan suddenly discovered he had lost his loyal ally with the help of a military “coup.” This is a word that has huge negative connotations in Turkey, as it serves as an ugly reminder of painful past experiences. The result was a knee-jerk reaction from Erdogan, who simply wanted to “undo the coup,” as if it is that simple. The Turkish government has decided to reduce the complex political scene in Egypt into two simple narratives: a coup is bad and legitimacy must be reduced. Such a naive and frankly arrogant approach has taken many Egyptians by surprise. Why the sudden interest in Egypt’s internal affairs? And why all the pontifications and preaching? Why didn't Turkey react with the same ferocity when Hamas ousted democratically elected Mahmoud Abbas from Gaza?

Although many in Egypt understand and relate to the Turkish hatred of coups, they feel utterly uncomfortable with what they perceive as biased siding with one player in a bitterly divided country. Erdogan’s irrational anger and criticism of Egypt has portrayed Turkey as a patron of Islamism, not democracy, in the eyes of the wider Egyptian public. This has cost him his credibility as a possible impartial broker who can potentially help in solving — not aggravating​ — the crisis.

Rather than crying foul and saying, “Oh, it is a coup,” an approach that clearly inflamed an already volatile conflict, Turkey could instead triage the crisis to handle it in a calmer, rational way. A more basic "ABC" approach would win back Egypt, instead of potentially losing it forever: Accept the divisive nature of the conflict and try to stay impartial; do not play the blame game but listen and show empathy to both pro- and anti-Morsi groups; and call for mediation to start immediately to narrow the gap and offer potential solutions.

Islamists in Egypt are in desperate need of a trusted friend who can help them move from the consuming state of negative grievance to a more positive stance that can save them from self-destruction. Currently, they are consumed by grievances, failing to reflect on their grave past mistakes. This can easily radicalize their cadres and plunge Egypt into an ugly civil war, which will create a destructive tsunami in the region that will make Syria look like a walk in the park. Turkey can prevent this nightmarish scenario by acting as an honest broker between both sides of the conflict.

It is disastrous to interpret the crisis in Egypt as a war against Islam, as the Islamists like to portray. Morsi is neither the prophet of democracy nor the Jesus of political Islam. He is a good but stubborn man who contributed deeply to his own demise. It is about time for Islamists in Egypt and their Turkish allies to understand that fact. The only way for Egypt to emerge peacefully from this crisis is by convincing the Muslim Brotherhood that rejoining the political process does not mean legitimizing the “coup.” In fact, it is the only way to save Egypt’s democracy. Most Egyptians do not want to uproot political Islam out of their country, but they want to reintegrate it in a more pluralistic, democratic system. There is still time to reconcile Egypt and heal its bleeding soul. Turkey can help, but only if it is sincerely willing to help.