Morsi’s Power Grab Should Be No Surprise 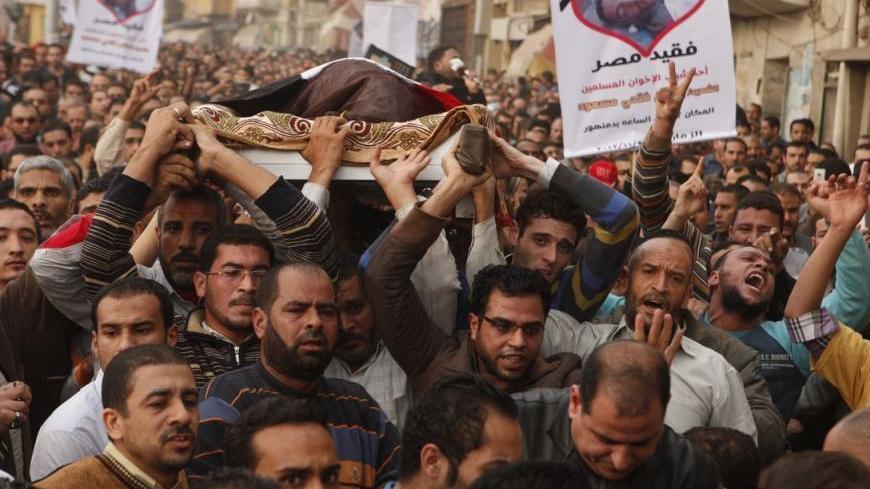 Muslim Brotherhood supporters and relatives carry the body of 15-year-old Islam Massoud during his funeral in the Egyptian town of Damanhour, Nov. 26, 2012. Massoud was killed Sunday while attending a rally to show support for Egypt's President Mohammed Morsi and the Muslim Brotherhood when clashes broke out between supporters and protesters denouncing Morsi's decree granting him extra power, according to Brotherhood and security sources. - REUTERS/Asmaa Waguih
November 26, 2012

Following his recent edict granting himself unprecedented powers, President Mohammed Morsi addressed his supporters in front of the presidential palace — the place originally chosen by Mubarak to serve as the formal presidential building — declaring that he would “cure Egypt from the woodworms.” This particular remark sums up his attitude toward the current crisis: the president and his ruling party view their opponents as woodworm beetles in need of removal.

For anyone who is following closely and understands the history of the country and the ruling party, the Muslim Brotherhood, the recent events should not come as a huge surprise. It should be seen as an inevitable outcome in a country that is still seduced by selfish politics that aim for dominance rather than unity. Although the Brotherhood has undergone many changes to recast their image as “moderates” who support a democratic society, the group did not embrace any serious transformation of their way of thinking. The concept that “It is either me or them” is entrenched inside their mindset. There are some basic rules that have continued to govern its decision-making processes:

First, pragmatism is a tool that protects, rather than replaces, ideology. The pragmatism that Morsi has shown in negotiating the Gaza cease-fire between Israel and Hamas may have surprised many, particularly in the United States. This pragmatism is one of the Islamists’ tools to protect their beliefs when they sense that current conditions are not ripe to force a more preferable outcome. Their aim is rather to secure their basic foundation; pragmatism is the fleece that protects the ideology without compromising it.

Second, the Brotherhood is a monolithic entity. Many analysts argue passionately that the Brotherhood is not a monolithic group and that there are a variety of principles and beliefs among its members. That is true but with clear limits to this diversity. The group can accept differences in opinion but only within certain boundaries.  Individualism is not allowed in a group founded on obedience. Those who express strong opinions may be forced to leave the group.

Third, ambiguity is a policy. Since the revolution, the Brotherhood has adopted an approach of deliberate ambiguity in their dealings with the general public and with other political parties. They are always clear about what they are against but are much more elusive as to what they endorse. The phrase “civil state” is one example: the choice of words clearly rejects secularism, yet it does not specifically invoke the notion of an Islamic state. Their ambiguity was reflected in the deliberations over the new constitution, which is precisely why many non-Islamists group who wanted clear protection of liberties and rights within the new constitution were forced to quit the constitutional assembly.

Fourth, and perhaps most importantly, is hidden insecurity. Years of oppression have earned the group tenacity, but also a chronic suspicion of the wider society.  The group always boasts about their strength yet their actions reveal their insecurity. Their persistent claim of conspiracy — even by hints by Morsi in his last speech that some are plotting against the revolution and seeking outside help, and his hints of phone tapping of those alleged plotters — reflect a rattled party, utterly uneasy with their new position as rulers. Their desire for power grabs is, in fact, part of self-protection strategy against an outside world that, in their eyes, is full of enemies and non-friends.

Understanding the above points is essential in explaining the unfolding events in Egypt. Morsi was pragmatic when pragmatism was needed. He happily made deals with other groups, like the Sixth of April Movement, to secure victory in the election. Deliberate ambiguity has helped him in abandoning that to which he never clearly commits. His united party allows him to consistently mobilize supporters and create an illusion of a majority by using what Egyptians now describes as “buses democracy” by mobilising crowds from various regions to fill the squares in a matter of hours. Now, his insecurity has tempted him to fast track his plan to cleanse the political sheet.

In his mind, Morsi views Egypt as a malfunctioning machine that must be restored back to its factory settings with Islamic instruction and an Islamist semi-monopoly that is geared to produce law-abiding citizens who agree rather than oppose, and worship rather than reject. An Islamic constitution and restoring a majority in the next parliament are musts, and for them, any path or actions are justified. Morsi’s desired transformation is aimed to achieve a made-to-measure democracy, with some elements autocracy that is deemed by him as necessary.

The problem with the “woodworms” approach to politics is that it was tried before in Egypt and failed drastically. Gamal Adbel Nasser, Egypt's president from 1956 till his 1970 death, treated them as Muslim Botherhood as a dangerous worm — yet despite his ruthless oppression, he failed to prevent their spread in the Egyptian society.

Regardless of the outcome of the current crisis, and whether the president choses to compromise or persevere, a serious transformation in the mindset of Morsi and the Muslim Brotherhood is much needed if they are seriously willing to move the country and break with old attitudes. However, and to be honest, I am not holding my breath, Egypt has not had successful revolutions in two consecutive years, the Brotherhood seems to be firmly in control, while their opponent still have no clear plan for the day after, both are not willing to look back at the history books and learn from it.