4 Reasons Why US Shouldn't Reduce Aid to Egypt

The recent decision by the US to withhold a major arms shipment to Egypt will have no impact on Egypt’s democratic transition. 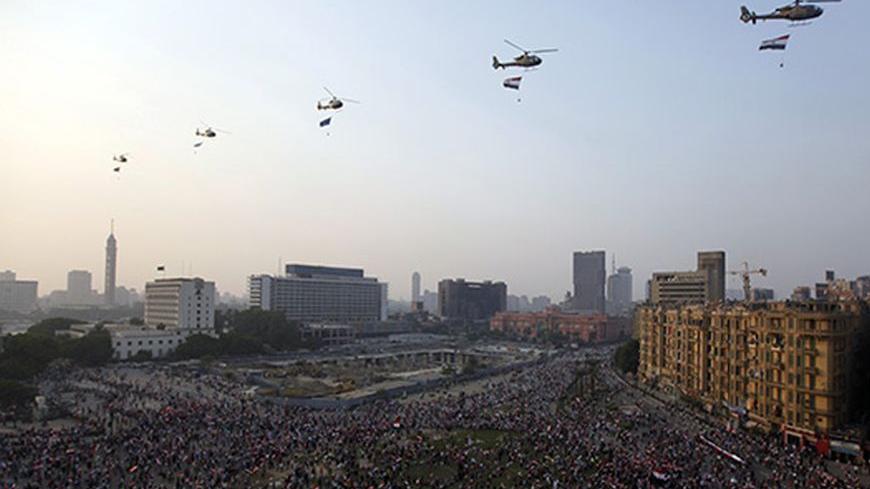 Military helicopters are seen flying over Tahrir Square to celebrate the anniversary of the 1973 war, in Cairo, Oct. 6, 2013. - REUTERS/Mohamed Abd El Ghany

It's hard to find any written analysis about America and Egypt without mention of the $1.3 billion aid package the United States delivers annually to the Egyptian military. Following the 2011 Arab Spring, the general debate in the United States focused on how America could help the Middle East in its time of upheaval. However, things have changed recently. In Syria, instead of focusing on the overall stability of the Levant, the debate has shrunk to a discussion about President Bashar al-Assad’s chemical weapons. In Egypt, the debate that once concentrated on ways in which the United States could help that country’s emerging democracy has now shifted to military aid.

Last May, despite concerns about President Mohammed Morsi’s leadership abilities, US Secretary of State John Kerry quietly approved a huge arms shipment to Egypt. Later, after Morsi was ousted, the United States canceled a joint military exercise with Egypt but continued to provide aid. Now, following the recent turmoil, US officials have said that they will withhold the shipment of a dozen AH-64D Apache helicopters Egypt ordered four years ago. It has been increasingly frustrating to see such a crucial subject being debated under the false trilemma of keeping, slashing or cutting aid.

Although US President Barack Obama’s policy on Egypt makes perfect sense to some, Aaron David Miller argues that it is about “interests,” a word Obama used prominently in his recent UN speech. Others, like Shadi Hamid and Peter Mandaville, have argued for cutting military aid to Egypt. Many politicians, including Republican Sen. John McCain, share this view, while others are not happy with the decision. Rep. Eliot Engel, the most senior Democrat on the House Foreign Affairs Committee, has slammed Obama for cutting aid to Egypt. Israel has also expressed dismay at the cutback.

As an Egyptian, I have no right to dictate to the United States what to do. After all, the aid program is funded by American taxpayers’ money, and it is up to US lawmakers to decide how it should be spent. Nonetheless, I can outline some points from an Egyptian perspective.

First, it's worth mentioning that America did not shower Egypt with billions of dollars for nothing. Over the past 35 years, the Egyptian leadership has been a reliable ally to the United States in the region. Then-president Anwar Sadat’s realignment away from the Soviet Union arguably cost him his life. His successor Hosni Mubarak stood by the United States in the first and the second Gulf wars and in its “war on terror,” a stance that earned him the contempt of a wide swath of Egyptian society. The generals may have betrayed the public by abusing the aid for their own benefit, but they were always loyal to their American allies. The aid was never focused on reforms, but loyalties — a strategic miscalculation that was particularly overlooked after the January 2011 revolution.

Second, timing is everything. If the primary goal of any aid cut is to save Egypt’s democracy, then the US decision has come too late, and will have little impact. The appropriate time for this much-wanted salvation was January 2011 following the takeover by the Supreme Council of the Armed Forces (SCAF). November 2012 was the second wasted opportunity, when Morsi, the elected president and supreme leader of the armed forces, issued his divisive decree that sowed the seeds of the current crisis. The United States’ silence was detrimental to Egypt’s cause and signaled to all sides that the administration had disengaged from the political mess in Egypt.

Cutting the aid now may be morally sound, but is a little too late to stop the violence and the ongoing bloodshed. Any US interference now would be viewed in Egypt as America flexing its muscles to reinstate the Muslim Brotherhood against the wishes of a wide segment of Egyptian society.

The reintegration of Morsi's supporters in the political process has to come from within Egyptian society and not from outside pressure, which Shadi Hamed and Peter Mandaville are advocating. Many Egyptians reject bloodshed and will continue to fight for freedom, equality and true democracy with or without US aid.

Third, the notion that a lack of democracy may stimulate insurgency in Egypt is fundamentally a fraud. The militants in Sinai are using Morsi’s ousting as a pretext for their ongoing operations against the Egyptian army; however, they will never stop their attacks, even if Morsi returns to power. Furthermore, the motivation for cutting US aid should not be based on rising militancy. The US money should not be part of an appeasement deal or used as an incentive to stop violence. If those opposing the coup resort to violence after the current crackdown, then they were never true democrats in the first place. From Turkey to Burma, peaceful resistance always prevails.

Fourth, consistency matters. Many Egyptians perceive US policy toward the Middle East as inconsistent. For example, the United States hardly waved the aid card to Israel to push the peace agenda or to protest the massive use of force against the Palestinians in the past. Even if some argue that the context is different, and that Israel is not Egypt, surely, using the same logic, Egypt is not Iran, a country that systematically tortures and oppresses its people. Neither is it Syria, which is still massacring its own civilians. However, the Obama administration is willing to lift sanctions on Iran if it abandons its nuclear program, without even discussing its human rights record, and Kerry has praised Assad for implementing the chemical-weapons deal, despite the ongoing carnage in Syria.

Consistency has never been overrated in the Middle East. In fact, the inconsistency of the current US administration is partly the reason why many in Egypt view the United States in a very negative light. Moreover, recent Pew research indicates that many Egyptians agree that US financial assistance has a negative impact on their country.

It's clearly time for a 360-degree review of US policy on Egypt, its intention, effectiveness and the consequences of any decisions the United States makes. The current language emanating from the State Department will not benefit anyone. This is not about morality versus reality, but about clarity, timing, effectiveness and, more importantly, readiness to accept the consequences.

Perhaps the United States should consider a shift in its aid policy from the current carrot-and-stick approach to a more substantial coaching and mentoring package. The civil-military relationship in emerging democracies is a particular area in which the United States can help — that is, of course, if it really considers Egypt a friend, not just an ally.

The Arab awakening may have been a tragic and disappointing journey, but at least it taught people that the mess is their own, and that they are the only ones who can sort it out. All the people from the outside world want — including the United States — is straight, honest and impartial support, even if very little money comes with it.