Egypt Debates US Strike on Syria

Anti-Americanism has clouded perceptions in what is now the post-realist phase of the Egyptian revolution. 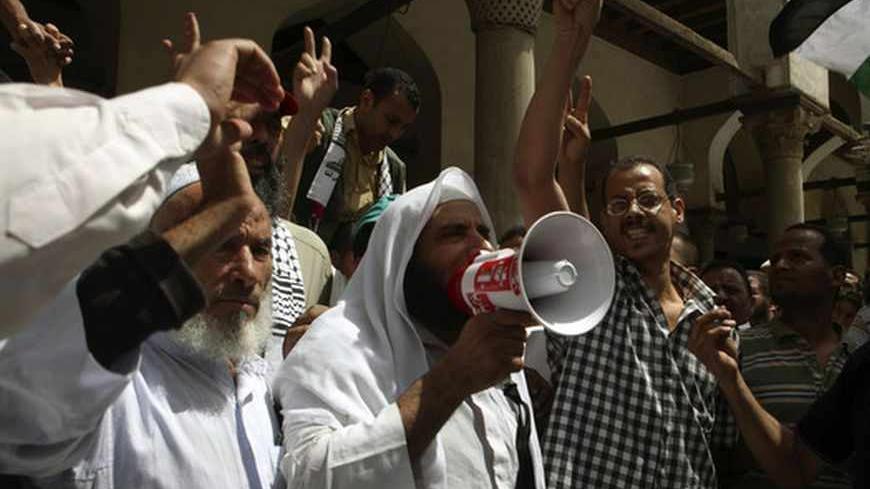 Protesters chant slogans in Al-Azhar mosque during a pro-free Syria and pro-Palestine demonstration after Friday noon prayer at the mosque in Cairo May 10, 2013. - REUTERS/Asmaa Waguih

As the debate rages in the United States and other Western nations about a possible strike against the regime of Syrian President Bashar al-Assad, a parallel debate is taking place in Egypt. Officially, the interim government has rejected any international intervention in Syria. The government’s stance is supported by many political parties, including the liberal Free Egyptian Party and moderate Islamists such as the Strong Egypt Party. The official stance has also gained strong backing from a wide portion of the Egyptian public. The mood now among Egyptians is hostile to any US intervention in Syria. Despite the ongoing civil war, the use of chemical weapons and the thousands of Syrians who were killed, injured or displaced, any US strike against Syria will be viewed in Egypt like the 1956 Suez crisis — that is, an unlawful attack by Western forces against a sovereign Arab state.

To understand the Egyptian stance, it is helpful to link it to the evolution of society after the January 2011 revolution. The last two and half years can be divided into three phases.

Phase one is best described as the romantic phase, in which Egyptians were mostly feeling good about themselves and proud that other countries wanted to mimic the Egyptian experience and revolt against their own tyrants, hence the strong solidarity with the Syrian revolution. Egyptians wholeheartedly empathized with the Syrian youth, without contemplating the implications of the crisis in Syria on the Egyptian domestic front.

Phase two — the realist phase — began roughly with the start of Mohammed Morsi’s tenure as the president of Egypt and the Muslim Brotherhood's leadership. It more or less coincided with the full-blown armed confrontations in Syria and the rise of radical jihadist groups. Many Egyptians subconsciously began linking Islamism in Egypt with that in Syria, and viewed the Muslim Brotherhood as an international organization that placed its own interests above those of Egypt as a state. In the pro-Syria rally that Morsi organized, in which he claimed that Egypt’s people and army would back the Syrian revolution, the audience came mostly from various Islamist groups, and the shouting of religious slogans was ultimately perceived in a negative way among the military and the wider public, indirectly compelling many to join the demonstrations against Morsi on June 30. In May 2013, a Pew public-opinion poll revealed that close to 60% of Egyptians opposed Arab and Western governments sending arms and military supplies to anti-government groups in Syria, even though 81% of Egyptians had an unfavorable view of Assad.

Phase three is the post-realism phase, and began after the military takeover and ousting of Morsi. This phase is characterized by strong anti-Americanism and anti-Muslim Brotherhood sentiments. The days when locals gave the United States the benefit of the doubt are long gone, and now there is only fear and paranoia. For example, the alleged nomination of Ambassador Robert Ford, who previously served in Damascus, as the new US ambassador in Cairo has caused strong negative reactions in Egypt. This irrational rejection had nothing to do with Ford himself, whom most Egyptians hardly know, stemming from a deep sense of insecurity that infected many Egyptians as they watched the slow destruction of Syria into a failed state. Ford became a symbol of what the Egyptians do not want to replicate in their own country.

With this insecurity and the rising mistrust toward political Islam, the Muslim Brotherhood as an organization and its international project, illogic has become rampant in Egypt. Doubts have arisen among the public about who is right and who is wrong in the Syrian tragedy. Needless to say, the neo-nationalism that is slowly emerging now in Egypt has revived Nasseresque hostility against any foreign meddling in Arab affairs.

Nonetheless, underneath the skepticism and the hostility, the immanent strike on Syria could be a blessing in disguise for the leadership in Egypt, and for good reasons.

The forced end of pro-Morsi sit-ins with its high death toll has rightly focused global attention on Egypt with many Western politicians and analysts now calling openly for an end to US military aid and even imposing some sanctions on Egypt. Now, Syria has shifted the attention of the international community away from Egypt, which could serve as a welcome break for the Egyptian government. Already, the attention has eased off, despite the continuous crackdown on the Muslim Brotherhood’s cadres. Once any military strike starts, Egyptian news will substantially shrink from the world stage.

The rising nationalist rhetoric in Egypt that has coincided with US President Barack Obama’s declared intention of striking Syria would double if the strike actually happens. Undoubtedly, images of widespread destruction and civilian casualties will fuel more rallying and support for the Egyptian military. The military leadership in Egypt thrives on public approval and attention, always nervous about any shift in public opinion. Striking Assad would formally sign the death certificate for the Syrian army and reinforce the perception of the Egyptian army as the only powerful army remaining in the Arab world, guaranteeing a surge in support for militarism and neo-nationalism in Egypt.

Furthermore, insecurity feeds wild political speculation. Egyptian analysts have been marketing an intriguing idea that stems mainly from their anti-American stance: Once Assad’s regime collapses, Egypt will be next on the hit list. They are convinced that the United States strongly backed the Morsi regime and that army chief Abdel Fattah Al-Sisi has ruined American interests in the Middle East by his move against Morsi. Therefore, the United States is bound to take retaliatory measures, but only after finishing off Syria and Iran, which are higher on its list of priorities. The thought of this is simply wild, but sadly, many Egyptians find it plausible.