US popularity is sinking to new lows after the June 30 demonstrations that led to the ouster of Mohammed Morsi. 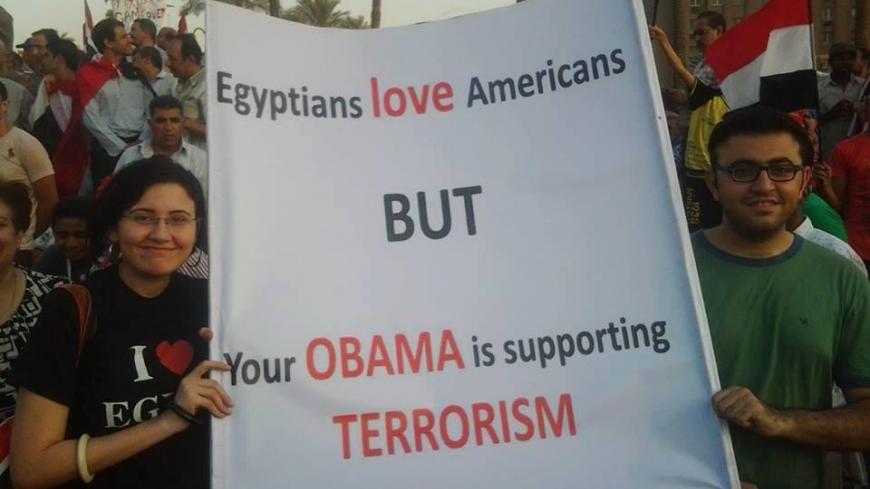 More than ever, Egyptians are now divided over everything. They are divided on being pro-Sisi, pro-Morsi or pro-neither. They are divided on the “coup vs. revolution” debate, on the usage of force against sit-ins, on how the political process should move forward, on who really to blame for the violence and bloodshed in the country. The list goes on. But one thing they are all united on: US Ambassador Anne Patterson must leave, and American “interference” in Egypt has had a negative impact.

In fact, even the suggested new ambassador, former Syria envoy Robert Ford, is already the subject of a mounting popular rejection campaign, being seen as “the man who divided Syria and created the Free Syrian Army to destroy the country,” as a common refrain goes. Those behind the campaign think either Ford is being sent to Egypt to turn it into another Syria, or that he’s just not the right man for the job. Other than Patterson, everyone hates Obama as well. There’s even a new, and quite peculiar song, about that.

Many in the opposition have often made a point of using varyingly harsh rhetoric regarding the United States, whether it was the Islamists during the Mubarak era or the secularists under Mohammed Morsi. A number of independent secularist figures, as well as members of the National Salvation Front (NSF), the liberal and leftist alliance, publicly shunned meeting with US representatives. They increasingly spoke of the Brotherhood as “allies in close contact with the US” as if that were an insult by definition, and brandished such actions as signs of patriotism and nationalism. Over time, it became normal for a political figure or group to be negatively branded or accused of having “met with Anne Patterson,” as a self-evident crime, as if political groups and figures are not expected to meet with ambassadors, let alone the ambassador of the only superpower remaining in the world.

Research and polls have shown a steady decline in favorable attitudes in Egypt toward the US. In 2008, George W. Bush’s last year as president, a Pew poll showed that only 22% of Egyptians had a favorable view of the US, down from 30% in 2006. The number slightly grew to 27% after Obama took office, only to decline in early 2013 to 16%. Confidence in Obama dropped from 42% in 2009 to 26% in early 2013, with 72% having no confidence in the American president.

In early 2013, only 24% of Egyptians saw the relationship with the US to be of some importance, while a whopping 69% saw it to be of little to no importance. Even perhaps more remarkably, the same early 2013 poll indicated that 55% saw US economic aid to Egypt to be of “mostly negative” impact. Similarly, 58% saw the military aid to be of mostly negative impact, 28% saw no impact and only 10% saw it to be of mostly positive impact. The poll also showed that those voting for secularists and liberals are more likely to have a positive view of American economic aid to Egypt. One month after June 30, the numbers are likely to have worsened.

Some of the anger and negative images, to be sure, are the result of conspiracy theories and accusations that are often repeated in the media without solid supporting facts. They include regular claims that the “the US wants to divide Egypt” into several states; that “Morsi was an American spy his whole life”; to “the Brotherhood takes its orders straight from Patterson.” In fact, things could go as far as the “Head of the National Union of Human Rights Organizations” claiming that Patterson had met with Brotherhood leaders to orchestrate the deaths of the tens of Brotherhood members in the Nasr Road events to pin the deaths on the military.

Some suggest that such negative sentiments are partly a reaction to the US position as global superpower, in a country in which nationalism and the idea of Egypt as “the” regional power run high, and where the goals of US and Egyptian foreign policies are often seen as being at odds. Add to that the fact that the prevailing narrative of Egyptian history does not have a very flattering view of the US and its role throughout the Nasser era and the Arab-Israeli conflict.

Then there is the more immediate issue of US policy on Egypt over the past several years. Some Islamists retain anger over the US being too accommodating of Hosni Mubarak and his repressive tactics. Now, almost all Islamists think America has abandoned Morsi and “electoral legitimacy” after his July 3 overthrow. Of course, many also still retain the belief that the US is against any form of Islamism by nature. They see the recent policy on events in Egypt as proof.

Many in the anti-revolution camp, in turn, think Obama and the US gave up on Mubarak too easily, were too friendly and non-critical of the Brotherhood, if not in strong direct support or even outright control of them. Then, with some irony, many in the liberal, nationalist and leftist pro-revolution camps also share the same view of the relationship between the US and the Brotherhood, while also believing that recent US policy and rhetoric on June 30 and Morsi’s overthrow to be unfair and hypocritical, not sufficiently recognizing the "evils" that the Brotherhood has committed. A large percentage of them also even see the US as trying to protect former allies (or, in that view, proxies) rather than conducting fair policy.

In my opinion, the deeper direct causes are actually the almost cliché answers that many have given in previous discussions. Egypt remains, even with what appears to be newly rising nationalism, a strongly pan-Islamic and pan-Arab country. For example, the war in Iraq and the destruction that ensued (and continues to ensue) have left a strong scar on how Egyptians see the US. Every car bomb that explodes in Baghdad and makes it to the news rekindles that anger, and reignites the “blood oil” discussions. The most profound reason for anger and dislike comes from US policy on the Arab-Israeli conflict — a conflict with strong national, cultural, political and religious significance. Particularly, a profound reason for discontent has been what is seen as an unfair and disproportionate amount of support that Israel gets from the US. For most Egyptians, the US isn’t a balanced mediator of the conflict; it is willing to allow Israel to continuously change the facts of the situation on the ground to its favor, and allow Israel get away with violence against Palestinians.

Clearly, the deteriorating US public image in Egypt is not something that can be fixed overnight, but the long process toward some rectification can nonetheless begin now. The first step would be for the US to conduct a thorough review of its policy on Egypt. Any policy that makes a deeply divided country only unite around hatred for you is quite an utterly unsuccessful one. Whatever the ultimate resolution to the current conflict in Egypt, people need to feel that it was the best solution for Egypt, and that it was primarily made by Egyptians themselves, not something unpalatable that was forced upon the country. The final choice of new ambassador should somehow also send a reassuring and positive signal to Egyptians. More could be done to directly engage with local public opinion and the media to dispel some of the allegations surrounding US policies.

But one thing that could genuinely turn things around, is for Egyptians to feel that the US is an honest broker in the Mideast peace process — a broker that it's willing to stand up to Israel, and to seek a positive resolution for the decades-old conflict. As things stand, there is no way the US will be able to win the hearts and minds of Egyptians without ending the injustice faced by Palestinians. Kerry must succeed in creating something of real value with his new initiative, against all the odds.

One final thing to note though: Virtually everyone I have ever met in a demonstration carrying an anti-Obama sign told me his problem was with the US government, not the American people.

Bassem Sabry  is an Egyptian political writer and commentator. On Twitter: @Bassem_Sabry