Many Egyptians are concerned at Qatar's growing influence in their country, but Bassem Sabry asks if Egypt can afford to refuse Qatari aid at such a crucial time. 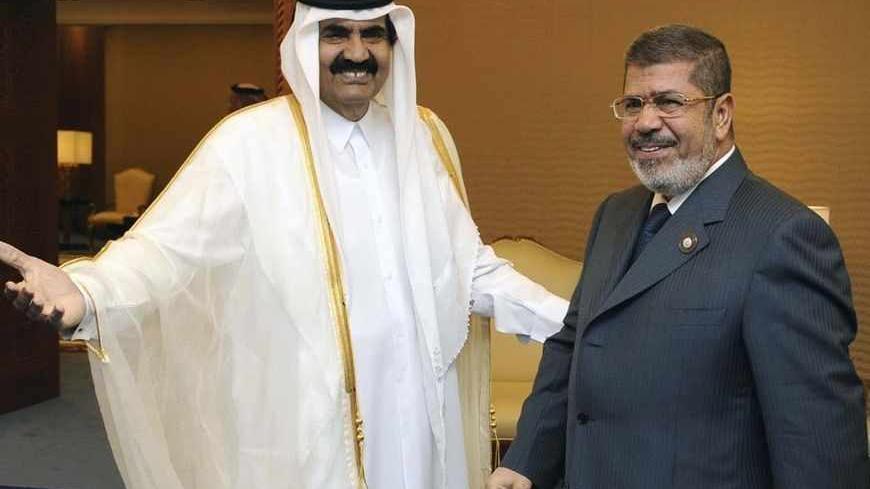 Much has been made of the consistent and quite determined support Qatar has been providing Egypt as of late, as well as Doha’s investment drive in the region’s most populous country.

Last year, Qatar announced $18 billion in investments in Egypt over the next five years, including a $10 billion North Coast tourist resort and $8 billion of investments primarily in oil and gas. Qatar has also recently acquired a 100% stake in Egypt's NSGB Bank, one of the biggest in the country. Furthermore, a new joint venture is being set up between Qinvest (owned by the Qatari Islamic Bank) and Egypt's (and the region's) largest investment bank, EFG Hermes. The venture, however, is being held up by regulators, and the deal could expire by next month if no official approval is reached by then, according to Reuters.

And there’s more. Besides $5 billion of pre-existing aid, Qatar is providing $3 billion more through the acquisition of bonds, a favorable gas-provision deal to help with power shortages in Egypt in the summer, and an exemption for Egyptian companies from Qatar’s custodial (Kafeel) system regulating companies operating in the Gulf state. All of this was seemingly announced together. Many Egyptian government officials now travel regularly (and often in groups) to Doha more than they seem to be traveling anywhere else, and Egypt's controversy-ridden prosecutor-general even just signed a somewhat peculiar agreement on joint judicial and prosecutorial cooperation and development with Qatar.

What's even more interesting is that all this new aid came soon after Qatar's foreign minister had announced that there were no short-term plans for further aid to Egypt, and when speculation was surfacing that Doha was privately growing impatient with how the Brotherhood is running things in Egypt. More remarkably, the new aid package came immediately and swiftly after popular political satirist Bassem Youssef lambasted what is seen as Qatar’s aggressive political ambitions in a satiric rendition of the popular Nasser-era pan-Arab song “My Beloved Homeland,” whose new, rhyming title was “My Beloved Qatar.” Immediately after Youssef’s sketch, a loud ruckus of a debate ensued over whether he had gone too far in his criticism of a “brotherly Arab nation,” whether he had risked a potential mass expulsion of Egyptian expatriates by an angry Qatar, and whether he wasn't appreciative of the aid Qatar is providing Egypt at such a difficult time. The ruckus continued into yet another divide between two mass online efforts: those bashing Qatar and expressing fear over Egypt's fate, and those leading a “Thank You Qatar” campaign, the latter appearing to be predominantly Islamist-oriented individuals.

The relatively few Qataris found reacting on social media seemed quite astonished at why so many Egyptians were angry that their country was helping Egypt in a time of apparent dire need. The more vociferous side seemed to be those bashing Qatar, rather than those thanking it.

So why is Qatar actually doing all of this? Some are attributing the recent financial aid to Egypt as plain and simply realpolitik, meant to establish a degree of inevitably handy influence over a still-influential Egypt during a complex time in the Arab region when any reforms or policies Egypt's post-revolution government undertakes would have significant reverberations in the region, and when few want Egypt's new Islamist administration to undergo any risky foreign policy adventures (and the list of reasons goes on.) Qatar wants to be more powerful and domineering in the region, the argument simply posits. Others link the support particularly to the Muslim Brotherhood and Islamism in general, and argue that it is less a matter of pragmatism and more of an ideological and political kinship of some sort that ties the emir and the Brotherhood in Egypt, with Qatar determined not to let the Brotherhood fail (and Al Jazeera’s allegedly biased coverage would come into play). Of course, some also suggest the recent batch of aid in particular was a decision taken by Doha solely to prove to other Arab countries that it is a dependable ally that would stick with them till the end, bolstering its attractiveness as a pole of regional power.

Similarly approached is the investment drive into Egypt. Some see it as part of a wider political effort to gain influence over Egypt, while others look at The Shard in London (among other noticeable global investments) and say Qatar is just engaging in sound business practices and trying to make use of a massive wealth it doesn’t want to leave idle; it is just investing and buying assets at a crunch time and an attractive price. Alternatively, some argue that both cases (the aid and the investment) involve a bit of both politics and pragmatism. In reality, it is likely to be a mixture of all of the above, but the question of which elements have supremacy over others is up for debate.

On the other hand, the reason for the hostility and/or worry that some Egyptians feel toward Qatar is not entirely a matter of excessive nationalism or a left-leaning discourse as some claim. There are understandable local fears of Qatar having excessive influence over Egyptian local and foreign policies. There are also vocal concerns, some of which may be far-fetched, that Qatar is trying to acquire control or leverage over critical and valuable Egyptian assets, even historic and geopolitical ones. (Odd headlines such as “Qatar wants to rent the Pyramids and the Suez Canal” are not entirely uncommon in local news outlets, whose stories often are based on rumor, inaccurate and blown-up information, and even perhaps intentional propaganda.)

The other reasoning is particularly focused on President Mohammed Morsi and the Brotherhood, and the perception that Doha’s sole vision is to support them at all costs and promote political Islam in Egypt using the Brotherhood. With the Brotherhood and the president growing increasingly unpopular in Egypt, any effort that could solidify their hold on power or mask what appears to be a failing administration could further anger those opposed to the Brotherhood. Those opposing the government also would be displeased by any effort aimed at supporting Brotherhood ideology, especially by a foreign entity. This theory about Doha promoting political Islam has a wilder variant I’ve heard a few of times without much credible attribution; it suggests that the emir of Qatar sees himself as the next Muslim caliph, and is using his country's wealth and the Arab uprisings (the deep involvement in Libya is a strong example) as an opportunity to pursue his dreams.

Of course, the depth of the particular hostility toward Qatar also has roots in the days of former President Hosni Mubarak. It is commonly accepted that his regime viewed Qatar as increasingly trying to overtake Egypt as the traditional spearhead of the Arab world, and that Mubarak viewed the Gulf state as intentionally employing Al Jazeera to tarnish the image of his regime and foment unrest against it. A famous heated entanglement once ensued between the Egyptian and Qatari foreign ministers during the final years of the Mubarak era, and former Egyptian Foreign Minister Ahmed Abul-Gheit seemed to have (with Mubarak's alleged blessing) a substantial vocal and clear personal distaste and hostility toward Qatar and its growing influence. Yet another trigger was Qatar’s then-growing involvement in Palestinian and Sudanese affairs. One reported Wikileaks cable suggested that Egyptian foreign policy had reached a point of being determined to paralyze any Qatari initiative during its tenure at the helm of the Arab league, and that “heated spirits rather than reason” were driving Cairo’s foreign policy. Thus, it can be seen that local rhetoric suspicious of Qatar has been growing for some time.

Egyptians ostensibly have a right to be suspicious. As very few things in life are free, it is natural to wonder why, out of all possible reasons, Qatar is putting all its might behind Egypt, and seemingly the Brotherhood in particular? But the second and opposing question, nonetheless, is whether Egypt can afford to push away this crucial aid at such a critical time. Even if the IMF loan kicks in (and the loan has yet to gain wider political blessing from the opposition), Egypt will need more financial assistance just to get back on its feet. Economic growth hovers around 2%, down from what has usually surpassed 5% over the last few years, and reserves have fallen from a record $36 billion in December 2010 to under $14 billion; this last figure includes the existing influx of aid and is said to barely cover three months of Egypt's needs. Other economic indicators don't look too encouraging either. In addition, Egypt is part of a globalized world and is strongly foreign-direct-investment dependent. Blocking or slowing Qatari investments without a clear rationale carries the risk of sending the wrong, and horrendously timed, signal to the world.

What Qatar potentially has in store for Egypt may not reveal itself soon, and Egypt remains in a tough position. In the long run, there is only one thing to do. The national political conflict has to be resolved, the economy stabilized and geared back into growth, and a far-sighted economic policy agreed to with a sufficient consensus must be set up and put into place in order to try to increase national independence. Government and economic transparency will become of even more paramount importance. And elected political representatives will eventually have to carry the responsibility of dealing with such controversies. In the short run, however, those who insist that Egypt find an alternative course to such aid need to audibly voice their suggestions.