Ali Hashem writes that Egypt’s crisis has spiraled from bad to worse. 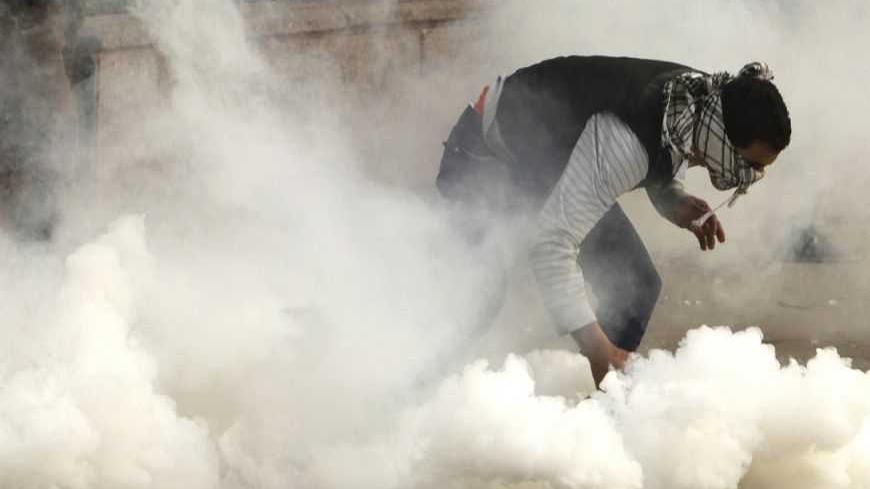 A protester against Egyptian President Mohammed Morsi attempts to pick up a tear gas canister fired by riot police during clashes along a bridge leading to Tahrir Square in Cairo, Jan. 27, 2013.

Brothers in arms once upon a revolution, those who toppled former Egyptian President Hosni Mubarak are now foes, bitter ones. It's known that revolutions devour their children; it's Egypt this time that proved it right.

Streets and squares of Cairo are never empty. Friday gatherings at Tahrir Square became a weekly ritual just as the Friday prayers. Hence the revolution never stopped as people are never satisfied, what's obvious is that Egypt's days aren’t the best.

Indeed they aren’t. Dyed with red were Egypt's days, many were killed in Cairo and Port Said, some during anti-regime demonstrations and others after a court handed down death sentences to almost two dozen local fans involved in a deadly fight at a soccer game last year.

The opposition lays the responsibility on President Mohammed Morsi and the Muslim Brotherhood. They issued a statement announcing that they would boycott the parliamentary election unless Morsi gave power to his opponents and amended the constitution. Mohamed ElBaradei, a prominent opposition figure, called on his Twitter account for a political solution and a national unity government saying it’s the only way to get out of the ongoing crisis. But how did all this evolve?

Everything started after Mubarak stepped down. Differences quickly surfaced, they were liberals, leftists, Islamists, just name it. They all wanted freedom, dignity, social justice, bread, these were what everyone in the streets of Cairo chanted for, but political movements wanted one thing more, power.

Among all, the Muslim Brotherhood was the most organized faction. For 80 years, they waited for this moment. Everyone knew that the Brotherhood will gain the majority in any election, that’s why many tried to get guarantees that they won't run for the presidency. A promise was given, but it wasn’t kept.

Morsi, an ex-prisoner under Mubarak's regime, a man who found himself free three days after the first ignitions of the revolution, became the president. He was one of several revolutionists to run for office. The final round saw Morsi facing Ahmad Shafik, Mubarak's last prime minister. Revolutionaries once again found themselves together, that was maybe the last time.

From Day One in office the Brotherhood leadership saw Egypt as their promised land. They were hungry for power; 80 years of oppression were to be rewarded at any price. It wasn’t only Morsi who was ruling Egypt; according to his opponents, he was the brotherhood leader's representative at the presidential palace. They accused the group of hijacking the nation and tailoring decrees and laws according to its vision, ignoring main political factions who were once side by side fighting for change.

The dismay within the opposition was reflected in the streets on several occasions. One of them was when the president decided to remove the attorney general from office and dispatch him to the Vatican as an ambassador. Just after that and while the street was still boiling Morsi passed a decree last November granting himself extensive powers. The decree stated that the president's decisions were "final and unchallengeable by any individual or body until a new constitution has been ratified and a new parliament has been elected."

At this point,  the opposition called for protests across Egypt. People flooded the streets of Cairo calling on the president to withdraw the decree. It was the first time that the chant "the people want the fall of the regime" reverberated in the Egyptian capital after the fall of Mubarak. The president didn’t react, his supporters did. They rallied in support of the declaration and called on him to a standstill. He stood for a while but later on bowed to the pressure calling for a referendum on the new constitution. The opposition refused.

At the time I was in Cairo, covering the latest events, I visited Tahrir Square where thousands were demonstrating. The harmony of Jan. 25 and the days that followed was missing, it wasn’t Egypt anymore that brought all these people together. The square lost its revolutionary charm. The struggle wasn’t anymore for change and democracy, this time it was entirely for power.

Opposition leaders believed this was the best opportunity to topple Morsi in the street. It was obvious they lack the majority that can defeat the brotherhood in polls. There were common grounds with pro-Mubarak activists and supporters, so they joined efforts in the street and on platforms. The latter were well organized, and had a common goal with their old foes, "the brotherhood most go whatever the price," both stressed.

Once again the revolutionist has to depend on another sides' popularity, this time remnants of the Mubarak regime, the "Folool". It’s the same strategy they adopted in their very first Jan. 25, 2011, uprising, then, they had to wait until the Brotherhood came to the streets on Jan. 28 for it to deserve the word revolution.

Two years later, it's clear that the revolution failed to meet the Egyptians' hopes and dreams; it might be labor screams, some suggest, but fears are growing that the fetus might be delivered dead.

Both the ruling Muslim Brotherhood and the opposition failed to meet people's expectations; they were like water and oil. Fears are growing among the Egyptian elite that the main danger threatening the revolution is its children; it might be now that the children are devouring their revolution.

Ali Hashem is an Arab journalist who is serving now as Almayadeen news network's chief correspondent. He was Al-Hazeera's war correspondent, and before that   a senior journalist at the BBC. He wrote for several Arab newspapers, including Lebanese daily Assafir, Egyptian dailies, Almasry Alyoum and Aldostor, Jordanian Alghad, he also contributed to the Guardian.